Aloha to Charlene Sands and THE TEXAN'S WEDDING ESCAPE

From friendship to passion…to forever?

Only if she doesn’t marry the wrong man first…

Lauren never got over her childhood crush on Cooper, but she’s grown up now and ready to settle down. She even agrees to plan her upcoming wedding at his ranch, but in close quarters, she’s second-guessing her groom and yearning for Cooper’s forbidden embrace… Then she discovers the rancher’s ulterior motive. Will she walk down the aisle with the wrong man? 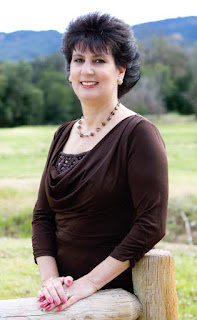 Charlene Sands is a USA Today bestselling author of contemporary and historical romance. She has been honored with the National Readers Choice Award, the Booksellers Best Award, The Cataromance Reviewers Choice Award and Romantic Times Magazine's Best Harlequin Desire Award of 2014. She is an active member of Romance Writers of America. When not writing, she spends time with her four "princesses", enjoys sunny Pacific beaches and yummy chocolate mocha cappuccinos! Sign up for her newsletter for fun and exclusive prizes at www.charlenesands.com and on FB and Twitter!

Charlene offers an excerpt of THE TEXAN'S WEDDING ESCAPE ...

“Thank you, Cooper. You’ve been wonderful.”

Lauren’s eyes flashed, all that meadow green working magic on him. Holding her like this felt right, and that was all wrong. But when she dipped her gaze to his mouth, the longing in her eyes did him in.

He put his hands in her hair and tilted her head up. Their eyes locked, wrecking his resistance, wrecking any semblance of rational thought. He brought his mouth down and touched his lips to hers. It was Fourth of July fireworks and sweet cake on Sunday morning all rolled up into one. She was soft and delicate and amazingly sexy. But one brush of the lips wasn’t enough; he needed more, demanded more. She made little noises in the back of her throat, and the sounds were like music and laughter and brightness. His body grew tight and hard, and Lauren was just as lost, just as needy. She hugged his neck, ran her fingers through his hair and he deepened the kiss even more. 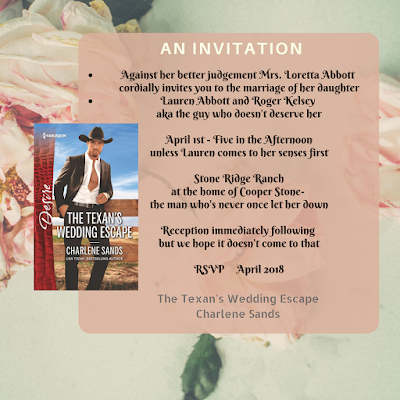