When a tourist is killed after unknowingly transporting a stolen Van Gogh, an undercover Kono and Chin enter the world of black market priceless art and are taken hostage. Also, McGarrett asks Iron Chef Masaharu Morimoto to help train Kamekona to beat Chef Sam Choy in a shrimp cook-off, on HAWAII FIVE-0.

I lived on Hickam AFB (next to Pearl Harbor) from September 2009 - August 2013.  One of the local cable stations broadcasted the original H50 at 6 pm and Magnum PI at 7 pm.  My kids laughed at Hawaii in the 70s and 80s respectively.

The H50 reboot exploded on the scene with its pilot in September 2010.   Over the past four years, the series has been hit or miss ... the hits feature military themed story lines.  The misses bogged down in the overarching storyline with Wo Fat portrayed by Mark Dacascos - we'll come back to him later.

I commend the writers for U'aihue - they delivered a fast paced episode best described by Churchill, "It is a riddle, wrapped in a mystery, inside an enigma; but perhaps there is a key." Surprising, it is Jerry who discovers the key.

The action takes place in upscale neighborhood of Kahala - check out my pictures from Kahala at this link and link.  It is always breathtaking to watch the Hawaiian scenary.

The secondary storyline - the Shrimpapalooza - added comic relief infused with heartfelt moments.   Kamekona presented his best shrimp dish to Morimoto during his first training session.  Morimoto was disappointed and advised Kamekona to cook with his heart.  Morimoto asked Kamekona how he learned to cook.  Kamekona replied he learned in Halawa Correctional Institute ... to which Morimoto challenged him to cook like that.  So Kamekona pulled out his car battery, connected it to a boiler plate, heated up the bottom of a coffee can; sliced garlic with a razor blade; and added "butter" from single serve containers (Morimoto picked up the discarded container in amusement).  Morimoto then announced Kamekona was ready for the Shrimpapalooza.   You'll have to watch the episode to find out what happens!

The show's writers and casting director deserve an extra lei for the special nuances embedded into the scripts:

- The tourist mom told Steve that her kids wanted to come to Hawaii after seeing it on their favorite TV show.   Hmmm ... which one would that be?

- Willie Garson guest starred as an art forger-turned-informant.  He is best know for his role as Mozzie on White Collar as ... an art forger!

- Rebecca Mader guest starred as a bounty hunter who returns art to its owner for a fee.  Her character flaunted an Aussie accent and flirted with Steve ... who is portrayed by Aussie Alex O'Loughlin.   Rebecca's character is the second woman this season to have an Aussie accent (and flirt with Steve).  As one fan tweeted, "How many Aussie characters will the writers throw at Alex before he breaks?"

Jerry: The real question is how is he getting out? After that alarm went off this place is as impenetrable as the the Dread Fort?

Steve: What?
Jerry: Game of Thrones. Anyone?

- Kamekono refers to  Morimoto as the Iron Chef.  From the Food Network (link),

Wo Fat is the Chairman on Iron Chef - it doesn't get any better than that!


If you are not watching H50, especially in the winter, then now is the time to start.   CBS broadcasts H50 on Friday nights, 9 pm EST.  You can also watch on line at cbs.com or on demand.

Do you have a favorite celebrity chef?  One randomly selected commenter wins a book choice from my convention stash.  Comments are open through Saturday, January 17, 10 pm in Baltimore.  I'll post the winner on Sunday, January 18. 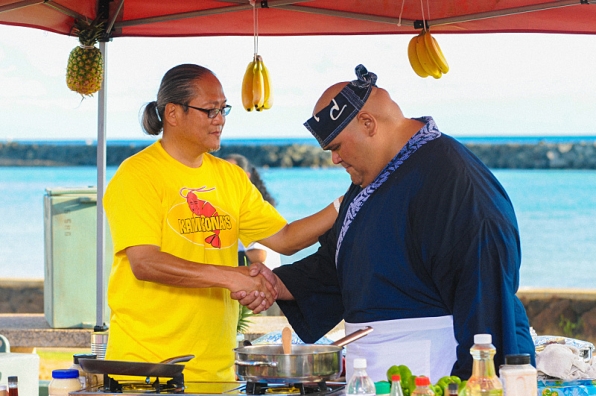 Morimoto coaches Kamekono at Shrimpalooza
cbs.com
Posted by Kim in Baltimore at 8:04 AM