Aloha to Ava Miles and THE TOWN SQUARE 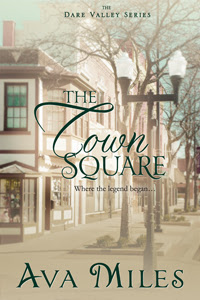 I live near historic Savage.  It has a town square that dates from the 1860s ... Ava Miles joins us today to chat about the 1960s and her new release, THE TOWN SQUARE.

The Sweet Nostalgia of the 1960s

So happy holidays! I’m Ava Miles, a new contemporary romance writer who kicked off her Dare Valley Series with NORA ROBERTS LAND a few months ago. I’m here to talk about my newest release, THE TOWN SQUARE, which is set in the early 1960s and finally tells the story my readers have been begging for: the love story of the wonderful Arthur Hale in my other books. Thanks to Kim as always for hosting me today.

I have to admit. I didn’t grow up in the 1960s. I wasn’t even born, but I’ve heard people talk about living through President Kennedy’s administration and the incredible days of Camelot. Not to mention Jackie Kennedy’s famous pink suit or her incredible pillbox hats. Art and fashion rose to higher prominence in this time. And that’s not even all of the political and social movements going on during this time: Civil Rights, Women’s Rights, the anti-war movement, the student demonstrations. And that’s not even the US facing off against the Soviet Union.

In THE TOWN SQUARE, we venture back to the early 1960s to the small town of Dare Valley, Colorado. Arthur (my loveable grandpa in the contemporary books) has just returned from working at The New York Times, and he’s starting up his own newspaper. His vision is for it to be the Voice of the West. He already knows this decade is going to be chock-full of change and that President Kennedy is going to bring about amazing things. This is the stage for the book, but it’s a small town romance at heart.

And just what was small town life like back then? Well, I had to ask my parents and some other friends who lived in small towns during this time period. We hearkened back to party lines—no one had their own phone numbers back then—and to Saturday night dinners at The American Legion. Then there was the popularity of the bowling alley and drive-in.

Dating back then was…well, kinda limiting. A “good” girl certainly didn’t go over to a single man’s house and stay for any amount of time, especially at night. The neighbors would have a field day. I had to get creative about the romance between Arthur and my heroine, Harriet Wentworth. And trust me, she’s not a small town girl.

Harriet is from a wealthy Beacon Hill family, and she’s arrived in Dare Valley under an assumed name with an agenda. A newspaper article ruined her father and sullied her family name, and now she’s out for revenge on the journalist who wrote it: Arthur Hale.

Harriet is probably one of my best dressed heroines, and I loved researching the fashion of the day. With Arthur being a newspaper man, the stories of the day are sprinkled throughout the book, adding to that nostalgia. From day one, I’ve called this book my “Mad Men” in a small town with a happy ending.

What do you remember about the 1960s or what impression do you have of it if you’re like me and weren’t born yet? I’d love to hear. And I hope you’ll check out THE TOWN SQUARE and take a trip down memory lane. Ava Miles burst onto the contemporary romance scene after receiving Nora Roberts’ blessing for her use of Ms. Roberts’ name in her debut novel, NORA ROBERTS LAND, which kicked off The Dare Valley Series and brought praise from reviewers and readers alike. Much to Ava's delight, BlogCritics says "It [NORA ROBERTS LAND] captures the best of...a Nora Roberts novel,” while USA Today's Happily Ever After blog praises the series noting its “wonderful, idyllic setting... [and] great characters." Ava continued The Dare Valley Series in FRENCH ROAST, which Tome Tender says “raised the entertainment bar again” and then THE GRAND OPENING, which reviewer Mary J. Gramlich says “is a continuation of love, family, and relationships.” The fourth book in the series, THE HOLIDAY SERENADE, was met with high praise, and now Ava shares her ode to the early 1960s, THE TOWN SQUARE, what she calls Mad Men in a small town with a happy ending. A descendant of generations of journalists, Ava—a writer since childhood—now lives in her own porch-swinging-friendly community with an old-fashioned Main Street lined with small businesses. Much like Dare Valley.

Ava is giving away an ecopy of THE TOWN SQUARE:

1960 is ushering in a new decade of change, and journalist Arthur Hale is determined to be on the forefront of it. A successful New York City journalist, he returns to his hometown of Dare Valley, Colorado to start a new newspaper that will channel the voice of the West, joining the ranks of prestigious papers like The New York Times and The Chicago Tribune.

But the bigger the dream, the higher the price. Arthur’s ambition and drive isolate him, and the only person who can break through his self-imposed solitude is Harriet Jenkins, his talented and mysterious secretary. Though Arthur’s sixth sense as a journalist tells him the beautiful and complicated redhead is hiding something, he can’t stay away.

What he doesn’t know is that Harriet Jenkins is actually Harriet Wentworth. A newspaper article ruined her father and sullied her family name, and now she’s out for revenge on the journalist who wrote it: Arthur Hale. As she gets to know Arthur, Harriet discovers he’s not the monster she thought he was. He’s a man of integrity, committed to uncovering the truth at all costs. Soon the impossible happens, and she finds herself falling for the man she set out to destroy, but can the two build a future on a foundation of lies and ugly truths?

To enter the giveaway, answer Ava's question - What do you remember about the 1960s or what impression do you have of it if you’re like me and weren’t born yet?