Aloha to Jodi Thomas and BETTING THE RAINBOW - Guest Post 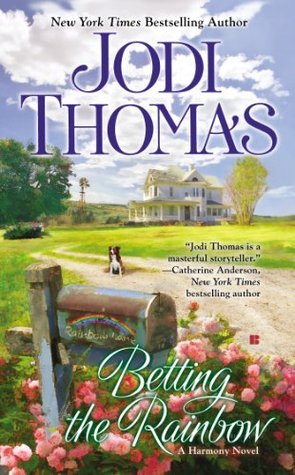 RITA winning author Jodi Thomas joins us today for a cozy chat about her new release, BETTING THE RAINBOW, Book 7 in her Harmony, Texas series ...

New York Times bestselling author Jodi Thomas returns to the town of Harmony, Texas, where life has a way of making better plans than anyone ever imagined… ...

Sisters Abby and Dusti Delaney have spent their entire lives on Rainbow Lane, but they dream of something bigger. So when a poker tournament comes to town, Dusti is determined to win enough money to leave. Enlisting expert Kieron O’Brian to teach her the game, sparks begin to fly as they play their hands. But Kieron refuses to stand in the way of her dream, even if it means losing her forever...

After a year of traveling, Ronny Logan is settling into a home on Rainbow Lane, but that’s all the settling she’ll be doing. Ronny refuses to fall for anyone, regardless of the chemistry she has with her neighbor Austin Hawk. Yet something undeniable begins to grow between the two loners—if only they can let their barriers fall and open their hearts...

One of my favorite things to do in the world is to sit down with a character who walks into my office (figuratively speaking), sits down and tells me her story. That’s how the book BETTING THE RAINBOW began.

I knew I wanted to write about Ronny Logan since she’d been with me in Harmony for several books. I felt like I’d grown up with her from the shy postal worker who wouldn’t talk to anyone in town to a world traveler trying to run away from her grief.

Only I didn’t know Dusti Delaney when I started. She and her sister had put their lives on hold to come home and take care of a dying mother. By the time she finally passed they’d lost everything except the small farm on Rainbow Lane. They were barely holding on with no hope of reclaiming their former lives. Then, Dusti heard about a charity poker game. If she won she might be able to afford to make their dreams come true. Only problem was, the one man who could teach her to play had flown in to win the game.

Reagan Truman runs the huge event while in the middle of her own crisis. The one man she’s ever loved has come home, but she’s not sure she can accept him and all the baggage he brings. Noah has to do something far braver than riding bulls if he wants to win her back.

I'm betting that this touching story of deep love between family, friends and lovers will leave you feeling good all over.

Mahalo, Jodi, for writing the Harmony series.   I am giving away a print copy of BETTING THE RAINBOW to one randomly selected commenter. To enter the giveaway,

1. Can you share a time and/or place where you were amazed by a rainbow? I have seen many in Hawaii ... perhaps my favorite is the one captured by my inlaws over the pineapple fields on Maui.

2. Comments are open through Saturday, April 5, 10 pm in Baltimore. 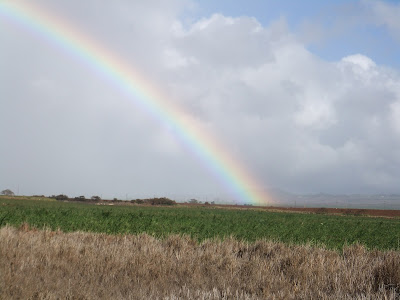 Posted by Kim in Baltimore at 8:33 PM