Last Monday, I landed in Atlanta for the annual RT Booklovers' Convention. I spotted several writers on my flight from Baltimore, including Laura Kaye. I sat next to Michelle (an aspiring author) who offered a ride to the hotel with her pick up driver, Siera London. Thank you, Siera, my sister in arms as a Navy Veteran!

After settling into my room, and connecting with other bloggers, we walked over to Poor Calvin's Eatery.

Established in November 2012, Poor Calvin’s is a unique oasis in Downtown Atlanta that offers a rare cuisine of Thai fusion with Southern influences. Originally from Vietnam but raised and classically trained in Germany, owner and chef Calvin Phan has brought his perspective of international culinary fusion to the front line of Poor Calvin’s.

Chef Calvin Phan was exposed to the restaurant business at an early age, having come from a family who owned several restaurants, of all calibers, in Europe. After completing his training, Phan worked as a chef in Switzerland for two years before moving to Georgia; where he opened and ran a Thai restaurant in Statesboro for 3 1/2 years before moving up to Atlanta in November to work within a larger scale. 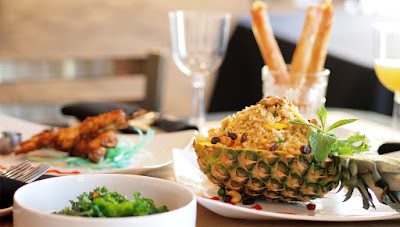 The food was fabulous, the company entertaining, and the waiter could have been a cover model. In fact, I invited him to mingle at the hotel and hand out his business card!

Thanks to Kim Rocha, Book Obsessed Chicks, for the restaurant recommendation!

For this week of recaps, I am giving away a sampling of books and swag from RT.  To enter the giveaway,

1. What would you name your restaurant?  What would be your specialty?

I would hire a Hawaiian chef to offer Pan Pacific dishes in A PINEAPPLE IN PARADISE. 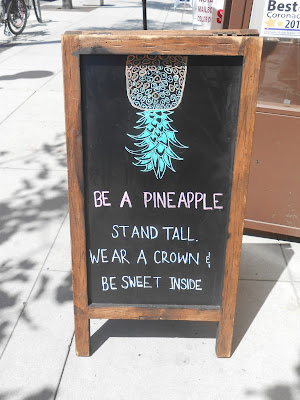