On Saturday morning, I scheduled a breakfast interview with Eileen Dreyer.  I also invited Anne Elizabeth and Cathy Maxwell.  As Anne and Cathy chatted on the other side of the table, I hogged Eileen all to myself.   We chatted about her career as a trauma nurse, writing romantic suspense, and traveling off the beaten path through Europe.   We both agreed the Blarney Castle gardens are magical despite the castle itself being a tourist trap.    Eileen shared details of her recent trip to Italy - the gorgeous landscape, the tucked away churches, and the delicious food!   She documents her trips on her website with pictures and recommendations.


I invited two special friends to join me for the book fair - Hannah Dennison and K.G.   Hannah is the author of the Vicky Hill mysteries set in Devon - home of my maternal ancestors.  Hannah herself is a Brit expat living in LA - her bio is fascinating and includes service in the Royal Navy.  K.G. was my neighbor here on Pearl Harbor until she moved a month ago to San Diego.  I invited both of them to enjoy the spoils of the book fair and military mixer.

Since I had a volunteer badge, we entered the book fair  a few minutes before it opened.  This gave us the opportunity to meet Catherine Coulter before the hoards of fans mobbed her.  Sitting nearby was Robyn Carr and Mary Janice Davidson - both with military connections.   Then we rambled down "YA alley" as the authors and their publicists readied themselves for the rush of teenage fans (RT sponsored a Teen Day - it was very encouraging to see young women excited about reading).

Hannah, K.G., and I simply walked up and down the rows, greeting authors who have supported SOS Aloha.  Hannah recognized several authors from Sisters in Crime (a mystery writers' network).   K.G. just soaked it all up!  Jade Lee greeted us with her big smile.  Brenda Jackson gave us a big hug.  Courtney Milan shared her Tim Tams (which the Aussie readers delivered to their favorite authors like fairy godmothers).  I passed by a reader who looked very familiar.  We both realized who the other was ... Rosie is a  romance blogger who I met last year at RWA in Orlando. 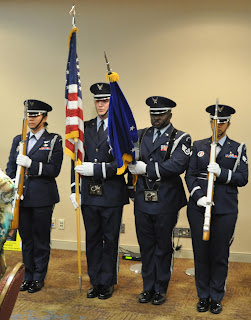 As the book fair wrapped up, Hannah and K.G. helped me set up for the SOS Military Mixer.  When I walked into the room at 3:30 pm, many were already seated.  I greeted them with "Aloha" and tasked them to find the veterans in the room.  At 4 pm, I called the room to attention and the Honor Guard from Los Angeles Air Force Base flawlessly posted the colors.  It had been a long time since I had seen this ... and it may have been the first for others.  Then JOLT - a barbershop quartet from Los Angeles - sang the National Anthem, each service's song, and America the Beautiful.  We asked those affiliated with each service to stand during their song:

- Coast Guard - Semper Paratus (Always Ready)
- Merchant Marines - Heave Ho!  My Lads!  Heave Ho!
- US Marine Corps - Called the Marine Corps Hymn, its first verse is “From the Halls of Montezuma to the shores of Tripoli"
- US Army - The Army Goes Rolling Along
- US Navy - Anchors Aweigh
- US Air Force - Off We Go Into the Wild Blue Yonder

Some attendees stood for several songs, demonstrating their extended connections to the military.   JOLT even performed traditional Barbershop songs, including a Singing Valentine to me! 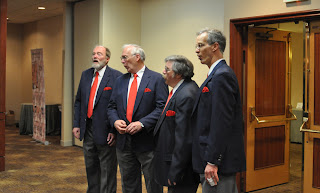 After JOLT's performance, I invited Eileen Dreyer to share a story about her father, a WWII veteran.  He recently passed away and she wanted to share the last song she sang to him - Stardust.  Most of us were in tears as she sang with such passion.   Eileen is a hard act to follow ... but I recognized the military "ohana" - family:

We had one active duty member - Jesse Wiseman from Fort Bliss.  His wife, Maggie, is a published author and an Army veteran, too.   I presented him with a frame poster of Captain America by Terry Huddleston.  It was donated by Ed English from Readers' Entertainment.   Jesse has deployed multiple times yet finds time to volunteer at the RT conventions (I spotlighted him early this week in the goodie room). 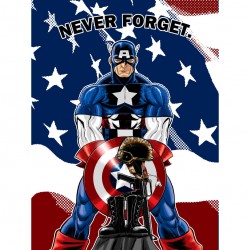 Jodi the Hedgehog Quilter also donated a beautiful quilt for a silent auction to benefit SOS America.  But I made the decision to auction it through SOS Aloha to give more readers the opportunity to bid on this fabulous quilt.   The auction will open on May 1 as we kick of Armed Forces Month.  It will close on May 30 - Memorial Day.  Stay tuned for more details. 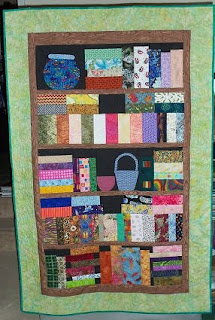 I recognize three VIPs at the military mixer:


I thank the authors who made it happen:

- Three authors who helped at the last minute:  Marcella Burnard, Sally MacKenzie, and Cathy Maxwell (all have military connections).


Our military gives us the freedom of thought and speech, thus allowing us to write what we want and read what we want.  In honor of that freedom, I am giving away another book - winner's choice - from my RT stash.  To enter the giveaway, leave a comment .... open forum!  This giveaway is open to all readers.  Comments are open through Saturday, April 23, 10 pm in Hawaii.   I will announce the winner on Sunday, April 24.

Kim in Hawaii
Posted by Kim in Baltimore at 3:02 AM