My new alarm clock is Anne Elizabeth, this time inviting me to breakfast with Eric Ruben, CH Admirand, and Barbara Vey from Publishers' Weekly.  Actually, Barbara's picture is better than mine so click on Barbara's link to see moi (and read her recap).


For lunch, it was back down to the prep room to help Anne Elizabeth stuff the goodie bags for the booksellers' party, AFTERNOON DELIGHT.  The most fabulous Kate Douglas came down with extra stuff.  I say fabulous because I shared the story of how she previously donated 10 stuffed wolves to my Fort Meade Tea Party.  My younger son had "recruited" one of the wolves to play football with his other stuffed animals.  Ultimately, the wolves were given in special goodie bags to the military nurses from Walter Reed Medical Center.   Kate laughed at the story and gave me a stuffed dog (from her next series) for my son's football team!  We exchanged stories about Hawaii as her son lives in Kaneohe.


AFTERNOON DELIGHT was indeed a delight for the booksellers as they enjoyed cakes with book cover.  We had so much cake that Anne Elizabeth invited readers walking by to join the fun.   I didn't take a picture of the cakes ... but Sarah Wendell from Smart Bitches Trashy Books did and posted on her blog.  Click on the link to read her recap and view her photos.

Someone mentioned "Mercury in Retrograde" as many award recipients and audience members were a bit weepy as the program progressed.  Perhaps the most touching was when Olivia Gates accepted her award for Series Romance.  She lives in Egypt and was unable to promote her latest book when it was released at the end of January.  Olivia thanked the romance community for rallying around her during the political upheaval.


After the awards ceremony, I dined with Anne Elizabeth, Cathy Maxwell, Christina Skye, and Bobbi Smith.   Once again, Cathy and I turned in early while readers gathered in the lobby, dressed in Faery Wings, for the Faery Ball.  Before you think of me as a wallflower, I sowed my wild oats long before I was married.  Comfy in my bed, I read the RT Magazine.

Time to giveaway another book - winner's choice from my RT stash.  To enter the giveaway,

1.  Leave a comment about AFTERNOON DELIGHT - what does it mean to you?   To me, it is a song from the '70s band Starland Vocal Band.  It is also indulging in cake (as we did at the Booksellers' party).

3.  Comments are open through Saturday, April 16, 10 pm in Hawaii to enter the contest.  I will announce the winner on Sunday, April 17. 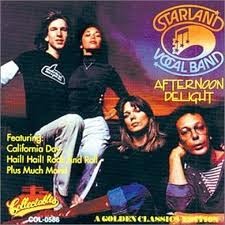 Posted by Kim in Baltimore at 3:26 AM