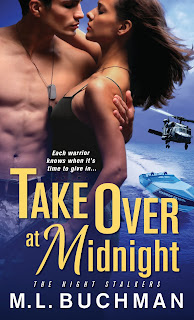 Back in Hawaii, I lived next to two Army helicopter pilots (the husband was an extra in BATTLESHIP - he is a crowd filler in the last scene at Punchbowl).  Back to helicopters, my friend Nadja is an Army spouse and loves ML Buchman's series, The Night Stalkers.  I asked her to review ML's latest release in the series, TAKE OVER AT MIDNIGHT...

ML Buchman’s TAKE OVER AT MIDNIGHT, the fourth book in his Night Stalkers series, once again features “women pilots who fly for the immensely secretive, real-life U.S. Army SOAR” and revisits the sunbaked, forward SOAR operations in Pakistan. I had a great time checking in on previous characters and getting to know the new team member, Chief Warrant Lola LaRue.

I love Buchman’s warrior women. He has an undeniable way with them; they’re tough, capable, oh so deadly, and yet completely female (not feminine so much). His men are often exasperated by their chosen mates, a very endearing trait that robs none of them of their masculinity.

Chief Warrant Lola LaRue and Sergeant Tim Maloney are no exception. She bloodies his nose; he’s head over heels even before the blood dries.

Lola feeling overwhelmed and intimidated when faced with the close-knit group that are the Night Stalkers makes sense, but her reluctance to believe in herself felt a tad bit off at times. Nevertheless, Tim knows a good woman when he sees her and is smart enough to give her the space she needs even while he pursues her with 100% “Night Stalkers Never Quit” commitment.

This may be a military romance set in the world of a forward deployed group of elite fighters, but Lola and Tim still find time and opportunity for romance (the roof?). I loved all the technical, military details that dealt with SOAR, the helicopters and Tim’s job as a gunner, but overall TAKE OVER AT MIDNIGHT felt less heavy on the technical aspects of combat than the previous books, which is in no way a negative.

If you enjoyed the other books in this series, you’ll love book four. If you’re hesitant to jump into a new series, don’t worry about needing to know previous events; TAKE OVER AT MIDNIGHT can be thoroughly enjoyed as a stand-alone.

Mahalo, Nadja, for your review!  I am thinking of you in warm Hawaii as it snows here in Maryland.   I am giving away Hawaiian souvenirs to one randomly selected commenter.  To enter the giveaway,

1.  What draws you to military romances?

To learn more about ML Buchman and his books, check out his website at mlbuchman.com.

I also hosted ML last week - check out his guest post at this link.