An afternoon at Dulles - Two Navy Vets, a Turkish Dad, and a Can of Peas 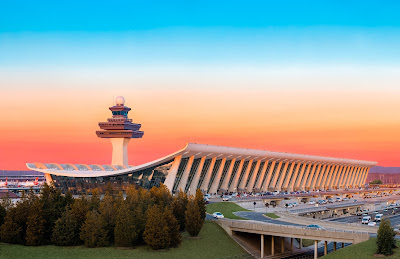 Yesterday, I headed out to Dulles International Airport to pick up my oldest son, who spent the last three weeks in Germany as part of his honors college international program.  His plane was scheduled to arrive 7 pm ... but I left my house at 2 pm to beat the rush hour traffic on I-495, the ring road Washington, DC. An hour later, I found myself inside the busy terminal.  Perhaps I could spend time in the USO Lounge ....

... instead, I chose to get some exercise by walking laps around the building.  I passed many women dressed in sari (India) and burqa (Saudi).  I also spotted several men dressed in customary clothing from Africa.  I watched the check in lines ebb and flow as the international airlines landed, loaded, and departed.  I was fascinated as families repacked suitcases, discard items that were not worth the excess weight fees, and sit on luggage to close them. 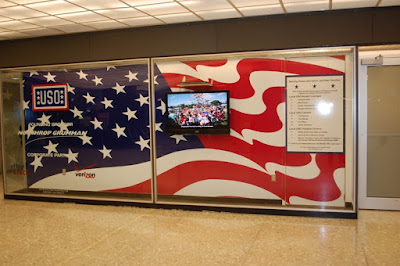 During one of my laps, I spotted an older gentleman wearing a Navy cap for the USS Begor (APD-117).  From its website (link),

USS BEGOR was named for LtJG Fay Broughton Begor, Medical Corps, US Naval Reserve. Young doctor Begor was a Medical Officer supporting amphibious operations during the invasion of Japanese-held Lae, New Guinea, in September 1943. He was wounded by enemy fire and died five days later on a hospital ship.

After launching the ship on May 25, 1944, the topside was redesigned ... capable of delivering and supporting Underwater Demolition Team (UDT) personnel close to shore

(UDTs are the predecessors of the SEALs)

With the surrender of Japan .... Begor was one of the first allied ships to enter Tokyo Bay on 29 August and would be the first to land troops, UDT-21, ashore at Futsu Saki Point in Tokyo Bay. 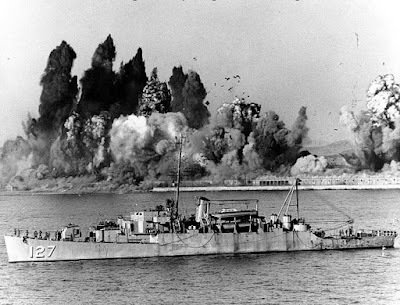 I approached the Navy veteran and thanked him for his service. We chatted about military life, including his Air Force son, who served in the Gulf War.  He noted that his son was recently diagnosed with PTSD by the VA hospital - I responded I would pray for his son's recovery through therapy.  The Navy Vet was on his way to Columbus, Ohio, to attend the PGA's Memorial Tournament with his younger son.  This lead to a conversation about golf, Jack Nichlaus, and Arnold Palmer (Arnie hails from Latrobe where my inlaws grew up).  I asked him if he needed any help checking in his luggage.  He responded, "I generally find the prettiest agent and play the old man card".  Oh, he is a Navy vet indeed.

I continued my laps and spotted another older gentleman wearing a blue cap with Navy Retired. Once again, I thanked him for his service.  We chatted for a few minutes about his career as a Navy pilot - he flew off the decks of numerous ships, including the USS Independence.  From Wikipedia (link),

USS Independence (CV/CVA-62) was an aircraft carrier of the United States Navy. She was the fourth and final member of the Forrestal class of conventionally powered supercarriers. She entered service in 1959, with much of her early years spent in the Mediterranean Fleet.

Independence made a single tour off the coast of Vietnam in 1965 during the Vietnam War, and also carried out airstrikes against Syrian forces during the Lebanese Civil War and operations over Iraq during Operation Southern Watch, the enforcement of the no-fly zone over southern Iraq.

Independence was decommissioned in 1998 after 39 years of active service. 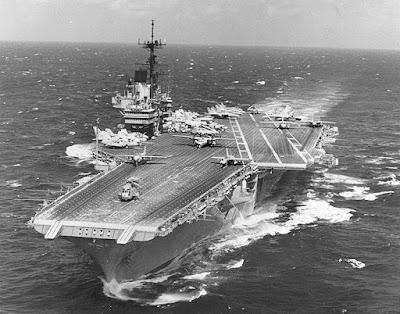 During my last lap, I spotted an older gentleman wearing an Aloha shirt. I stopped to comment on his shirt, leading us into conversation.  He was a Turkish immigrant who became an American citizen. He was waiting for his daughter from Turkey to visit him for the summer.  We chatted about Turkish culture, demonstrating that it's a small world after all.

I then received a call from my son who had deplaned his Iceland Air Flight.  Once I met him in the terminal, he shared that he noticed the Turkish Airlines Airbus parked next to his aircraft.  Given the size of the airplane, he knew the customs line would grow long.  So he did not dawdle like other passengers, thus demonstrating that he takes after me!

And the peas?  I spotted a can of peas abandoned on a seat ... apparently, it didn't make the cut for packing.  Rather than throwing it away, I brought it home to donate to the food bank.

1. How do you pass time at an airport, train station, etc.?  Have you chatted with fellow passengers?  Do you like canned vegetables?

2. Comments are open through Sunday, June 4, 10 pm in Baltimore. 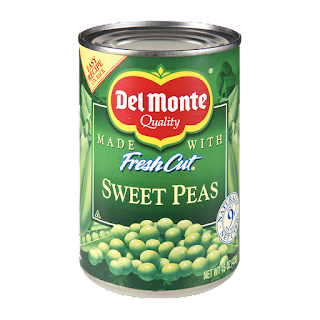