A date which will live in infamy


﻿Sixty nine years ago, a lazy Sunday morning turned into a national disaster. The Japanese bombing of Pearl Harbor began at 7:53 am upon the orders of Flight Commander Mitsuo Fuchida, “Tora! Tora! Tora!” (Tiger! Tiger! Tiger!)

- USS Utah: At 0801, the Utah took a torpedo forward and immediately started to list to port. Six officers and 52 men died from the attack. Her partially submerged hulk still remains, rusting, near her original mooring.


From the Honolulu Star Bulletin,

Beneath the waters of Pearl Harbor, 58 sailors, who died when the USS Utah was sunk by Japanese fighter planes on Dec. 7, 1941, silently guard the remains of a shipmate: the ashes of a baby girl.

Chief Yeoman Albert Thomas Dewitt Wagner had been waiting for a chaplain to be assigned to the Utah, hoping for a proper burial ceremony at sea for his daughter when the Utah went out on maneuvers.  An urn carrying her ashes was in his locker in the Utah's chief's quarters.   But the surprise attack changed everything.

Wagner was among those who survived the bombs that day, but he was not able to rescue his baby's ashes.  In retrospect, "I don't think there is a better tribute to my twin sister than to have all those wonderful and brave men guarding her," Mrs. Kreigh said during a telephone interview from her home in California.

The Navy has given permission for Mrs. Kreigh, the surviving twin sister, to be interned in the USS Utah when she passes from this earth.


- USS Oklahoma: Moored near the USS Arizona, the Oklahoma took three torpedo hits. Within 12 minutes, she had rolled over. 429 officers and enlisted men were killed or missing. The ship was raised, but she never saw action again. The USS Oklahoma Memorial remembers the men who died aboard the ship.


The USS Oklahmoha Memorial is located at the entrance to the USS Missouri, overlooking the USS Arizona from Ford Island.

- USS Arizona: At 08:06, a Japanese bomb hit the port side of the Arizona. 1,177 lives were lost, over half of the casualties suffered by the entire fleet in the attack. The Arizona remains “moored” off Ford Island as a memorial to her crew. The ship leaks about a quart per day into the harbor. Survivors from the crew say that the oil will continue to leak until the last survivor dies. The USS Arizona Memorial is operated by the National Park Service.

The Navy orginally attached a flag pole to the sunken ship in rememberence of the tragedy.  But the ship and crew deserved more. Enter another hero - Army veteran Elvis Presley. Elvis and History,

Elvis donated the proceeds of his 1961 Honolulu concert to the USS Arizona Memorial Fund. The USS Arizona Memorial was constructed at Pearl Harbor in 1962 and was designed by Alfred Peris, a prominent local architect of Austrian decent who fled from Germany to Hawaii. After the bombing of Pearl Harbor Peris was arrested and interned at the Sand Island Detention Center interment camp during the first two years of WWII. In designing the memorial Alfred Peris made sure that no part of the memorial touched or was affixed in any way to the USS Arizona. The average age of the men who died on the USS Arizona was 19 and the names of all 1,177 men who were killed on the Arizona during the attack on Pearl Harbor are listed on the memorial.

- USS Missouri: The “Mighty Mo” witnessed the end of World War II when the Japanese military surrendered on her decks in Tokyo Bay. The Mighty Mo is now a floating museum next to the Oklahoma Memorial. Her bow faces the Arizona as a solemn sentry so those interred within Arizona's hull may rest in peace.
﻿
﻿


Last week, the bridge to Ford Island was temporarily closed for the Navy to practise its annual Pass and Review to honor December 7. I share pictures from previous ceremonies. 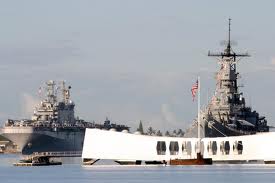 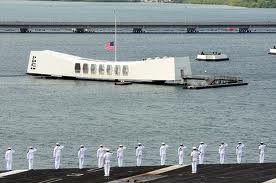 Posted by Kim in Baltimore at 1:36 PM