Aloha to Gwyn Cready and A NOVEL SEDUCTION 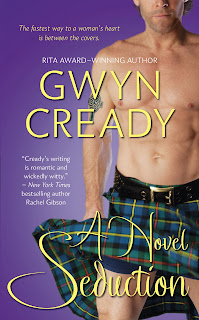 Gwyn Cready is known for her time travel romances but today she celebrates the release of a contemporary romance with a road trip theme, A NOVEL SEDUCTION:

When snobbish book critic Ellery Sharpe screws up at Vanity Place magazine, her boss assigns her the ultimate punishment: write an ode to romance novels, a genre she considers the literary equivalent of word search puzzles. To make matters worse, he hires her sexy former party boy ex, Axel Mackenzie, to shoot the photos. Axel really wants the project to succeed. For one, the magazine will double his fee if he convinces strong-willed Ellery to write a story no woman can resist. Besides, getting Ellery to fall for romance novels might be just the push she needs to believe people can change . . . even him. At his sister’s advice, Axel gives Ellery a copy of Kiltlander, a much-adored romance whose warrior hero is utterly irresistible. To her dismay, Ellery finds herself secretly falling in love with the story—and with Axel, who’s drawing his own lessons from the book’s compelling hero. With her carefully crafted image of herself crumbling and her dream job on the line, will Ellery risk it all to make the leap from tight-lipped literati to happily-ever-after heroine?


I posted my review on Goodreads at this link.   A NOVEL SEDUCTION takes Ellery and Axel to Pittsburgh, London, and Cairnpapple (Scotland).   Join me for a peek at their travel log:

A smaller bar, The Monkey Bar, makes up for it in cheap prices and good specials. The bartenders are all very well trained, and very pleasant to look at. With a television in every corner of the bar, a nicely stocked jukebox, and several dartboards it's easy to see why this place almost always has a crowd. The beers are always cold, and the food is excellent.

According to Ellery, this would be an accurate description of the original Monkey Bar until it was featured in VAMP and morphed into a paranormal waterhole to connect itself with the popular book. 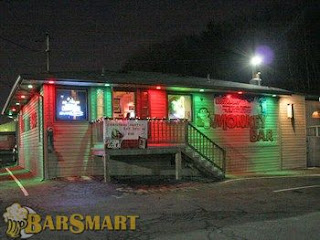 All romance books leads to England so Ellery and Axel jet off to London.

- Meeting the Rosemary Readers at the Rosemary Hotel (with Pub):   Still skeptical that romance books have any value, Ellery follows Axel to a London pub where the Rosemary Readers meet weekly.  The readers are not what Ellery expects.   In fact, they feed her curiosity for KILTLANDER and its time travel portal, Cairnpapple Hill.

Ellery and Axel travel by train to Edinburgh to meet with a socialogist. Ellery realizes that the good doctor lives in the shadows of Cairnpapple Hill.

- Standing atop Cairnpapple Hill. Cairnpapple is an actual site cared by Historic Scotland at this link.

Cairnpapple was used from about 3,000 BC to 1400 BC firstly as a ceremonial site then several centuries later as a burial site.  It is situated on the summit of Cairnpapple Hill with stunning views over central Scotland, and as far as Goat Fell, on Arran, on a good day.   The henge monument is a good example of this rare class of neolithic ceremonial monument.

Hubby and I visited Cairnpapple Hill during our 2007 tour of Scotland. I can tell you it is magical.

To celebrate the magic of romance, I am giving away a print copy of A NOVEL SEDUCTION to one randomly selected commenter.  To enter the giveaway,

1.  Leave a comment about some place special, where you live or visited, that would be the perfect backdrop for a romance book.

To learn more about Gwyn and her books, including links to purchase, check out her website at www.gwyncready.com.

And the party continues on my guest post, A NOVEL SEDUCTION - a study of undergarments in romance novels at this link.

Posted by Kim in Baltimore at 4:33 AM