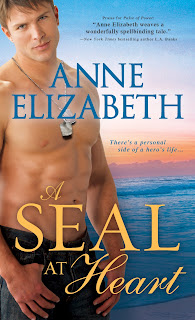 Aloha!   Today is the 71st anniversary of the Japanese attack on Pearl Harbor.  In Hawaii, it is a day of reflection for those who sacrificed for our freedom.   So I thought it fitting to post the dueling review of Anne Elizabeth's A SEAL AT HEART.   Please welcome my dueling partner, Tracey Cramer-Kelly, Army veteran and romance author.   From the book blurb,

He Lost Just About Everything On That Mission....

Being a Navy SEAL means everything to John "Red Jack" Roaker, but a mission gone wrong has left his buddy dead, his memory spotty, and his world turned upside down. His career as a SEAL is threatened unless Dr. Laurie Smith's unconventional methods of therapy can help him.

Maybe She Can Show Him How to Get it Back...

Laurie's father was a SEAL—and she knows exactly what the personal cost can be. She can't resist trying everything to help this man, and not only because she finds him as sexy as he is honorable.

As the layers of Jack's resistance peel away, he and Laurie unearth secrets that go to the highest levels of the military— and the deepest depths of their hearts...

Kim:  Why did you want to review this book?

Tracey:  I love reading military characters - not so much about intense “firepower” situations or missions, but in more personal aspects. I want to read about a character’s struggle with guilt or loss; self-doubt about their own actions; conflict with self and those they care about; balancing a desire to serve with a desire for personal fulfillment or love. And, being an ex-Army medic, I am drawn to stories of wounded veterans overcoming both physical and mental injury.

Kim:  Can you name one aspect of the story that resonated with you?

Tracey:  The healing elements resonated with me. I especially liked the scene when the heroine’s touch flooded the hero with different emotions - fascinating!

Kim:  How would you classify this book?

Tracey:  I love your description (action adventure, self discovery, and love story rolled into one) and don’t think I can improve on it! In fact, can I borrow it as a descriptor for my novels True Surrender and Last Chance Rescue since the themes are so similar?! J

And Tracey turns the tables on Kim ....

Tracey:   The opening scene of the book depicts a mission going south. What did you like about it (or not like), and how did that make you want to continue to read the book?

Kim:  I tend to shy away from Romantic Suspense, but Anne Elizabeth hooked me.   She wrote the scene in a away that it was compelling by not gratuitous.

Tracey:  The hero is a Navy SEAL who’s been sidelined by an injury and memory loss. What scene did you feel best displayed his core personality in dealing with this?

Kim:  Jack invited Laurie back to his apartment and she commented on his abundance of games.  Jack explained that he went to live with his grandfather after his mother died and his father abandoned him.   His grandfather played games with him to draw out the shell shocked six year old.   Jack commented that his grandfather had been in the Navy and Jack wanted to follow his Grandfather's example of doing the right thing.  This scene blew me away.

Tracey:  The heroine’s backstory as a SEAL “pup” and her relationship with her adoptive SEAL father affects her attitude toward all Navy SEALs.   Why do you think she ultimately falls for a Navy SEAL?

Kim:  Although Laurie claims she does not want to date any military men, it's hard to get it out of her blood.   Tracey and I are members of the RomVets - women veterans who are now writing romance (they write, I blog).   We have a Yahoo group for us to share ... because we get each other.  Ultimately, Laurie gets Jack.

Tracey:  How did you feel about the “apparitions” or appearances of the hero’s dead partner? Did they add to the story?

Kim:  I commend Anne Elizabeth for giving Jack a means to wrestle with these demons.  Throughout the book, he feels guilty that his swim buddy died, leaving behind a family.   In fact, his partner made several appearances to "kick Jack's butt" over his guilt.    Since this is a HEA, its safe to say that Jack finds peace ... have a hanky available for Jack's final scene with his swim buddy.  I think Anne Elizabeth left it to the reader to decide if it is his spirit or Jack's imagination.

Mahalo, Tracey, for joining me today!    Here are links to reviews for A SEAL AT HEART:

Tracey's on Goodreads at this link.

Elf, the Reading Addict, at this link.

Mary Gramlich, the Reading Reviewer, at this link.

I am giving away a print copy of A SEAL AT HEART to one randomly selected commenter.  To enter the giveaway,

1.  Leave a comment about "apparitions" in non-paranormal books - love it or loathe it?

3.  Comments are open through Saturday, December 7, 10 pm in Hawaii.  I'll post the winner on Sunday, December 8.

To learn more about Anne Elizabeth and her books, check out her website at anneelizabeth.net.

To learn more about Tracey Cramer-Kelly, check out her website at traceycramerkelly.com.

Check out my photos of Pearl Harbor on my travel blog, ALOHA ON MY MIND, at this link.

Posted by Kim in Baltimore at 6:26 AM