I've come to appreciate tattoos after living in Hawaii - it's part of the Polynesian culture.  Camden McQueen from Karina Halle's THE ARTISTS TRILOGY is a talented tattoo artist who can't forget Ellie Watt.   Karina is celebrating the release of Book 2, SHOOTING SCARS:

Sometimes the right choice can be the deadliest. When Ellie Watt made the ultimate sacrifice for Camden McQueen, she never thought it would be easy. But walking away with her ex-lover, Javier Bernal, in order to ensure Camden's safety has brought a whole new set of dangers. With Javier's plans for Ellie growing more secretive by the moment, Ellie must find a way to stay ahead of the game before her past swallows her whole.

Meanwhile, Camden's new life is short-lived. Fueled by revenge and pursued by authorities, he teams up with an unlikely partner in order to save Ellie. But as Camden toes the line between love and retribution, he realizes that in order to get back the woman he loves, he may have to lose himself in the process. He might just turn into the very man he's hunting.

The daughter of a Norwegian Viking and a Finnish Moomin, Karina Halle grew up in Vancouver, Canada with trolls and eternal darkness on the brain. This soon turned into a love of all things that go bump in the night and a rather sadistic appreciation for freaking people out.

Karina holds a screenwriting degree from Vancouver Film School and a Bachelor of Journalism from TRU. Her travel writing, music reviews/interviews and photography have appeared in publications such as Consequence of Sound, Mxdwn and GoNomad Travel Guides. She currently splits her time between her apartment in downtown Vancouver and her sailboat, where a book and a bottle of wine are always at hand. She is hard at work on her next novel.

DID YOU KNOW? Karina met her fiance when she was casting a book trailer for the third book of my Experiment in Terror series. He answered the Craiglist ad for the character of Dex and it was love at first.

The main character in The Artist Trilogy is named Ellie, who is named after Karina’s old dog, who was named after the character Ellie Satler in Jurassic Park, one of her favorite books and movies. 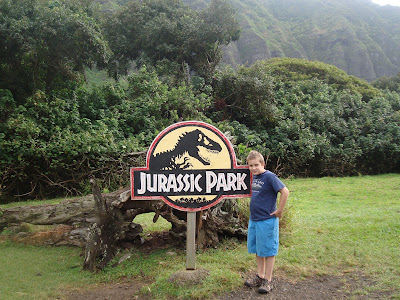 Did you know Jurassic Park was filmed at the Kualoa Ranch on Ohau's Eastern Shore?   All roads lead back to Hawaii!

What do you know about tattoos?  One randomly selected commenter wins a Hawaiian souvenir.  This giveaway is open through Saturday, August 24, 10 pm in Hawaii.  I'll post the winner on Sunday, August 25.