Aloha to Diane Kelly and LAYING DOWN THE PAW (Paw Enforcement No. 3) - Book Review 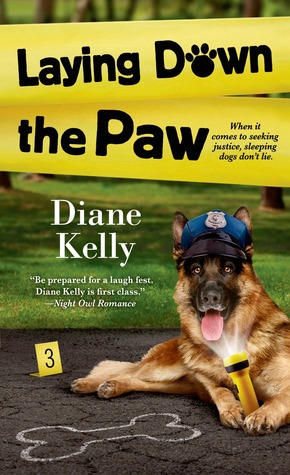 Police officer Megan Luz and her K-9 partner are back-with a vengeance.

IT'S A DOG-EAT-DOG WORLD.
When a raging tornado hits Forth Worth, Megan's squad car is flipped over-and her devoted police dog, Brigit, is not amused. But that's not all that's upside-down. The streets are littered with looters-and members of a violent street gang-and no local business is safe. It's time to get back on all fours and see that the job of protecting the public is done.

BUT WHO'S LEADER OF THE PACK?
But Megan, outmanned and outgunned, has no choice but to let the gang members get away. Later, when she learns that one of them is a suspect in an unsolved murder case, Megan is determined to see that justice is served. But will she end up in the doghouse? Her investigation has her and Brigit barking up the wrong tree at every turn. Meanwhile, a killer's on the loose....who will stop at nothing to get what he wants. 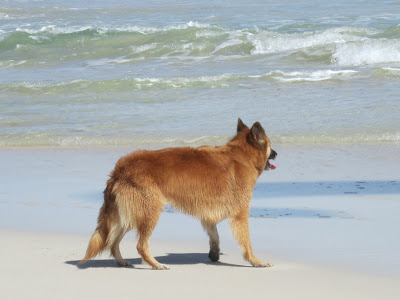 Laying down the paw in the sand ...

A successful man is one who can lay a firm foundation with the bricks others have thrown at him. - David Brinkley

LAYING DOWN THE PAW is Book 3 in the Paw Enforcement Series. Kelly reintroduces readers to the heroine, Megan Luz, an average Irish Mexican Catholic Texan. She grew up with a stutter, prompting her to develop a quiet personality. Yet Megan listened to others, a quality that came full circle once she became a Fort Worth police officer. After tasering her misogynist partner, she is reassigned to K-9 duty with Brigit, a German shepherd rescued from the pound for her keen sense of smell. Megan spends her off duty time helping Detective Johnson, a female mentor, with background investigations as the first step to becoming a detective herself. Megan has a special talent as a baton twirler - a skill she sometimes employs with her police baton during her patrols. Brigit has a special talent of finding food and tackling suspects, sometimes at the same time.

As with the previous two books, the plot unfolds through three perspectives: Megan's first person narrative, Brigit's third person, er, dog musings, and the "villain's" third person point of view. LAYING DOWN THE PAW opens with the brutal murder of a drug dealer - a mystery that plagues the Fort Worth Police Department throughout the plot. Megan is the first officer on the scene and finds herself sickened by the violence. Once Detective Jackson arrives, she advises Megan that it never gets easier to accept the bloodshed. Days later, Megan is caught in a tornado during her patrol. After climbing out of her damaged car, she and Brigit secure the area, only to come face to face with armed looters. Unable to safely defuse the confrontation, Megan allows the looters to walk away with their ill gotten gains. She later realizes that one of the looters resembles the police sketch of the murder suspect. The chase begins to find the killer.

Kelly combines humor with grit in LAYING DOWN THE PAW. I applaud Kelly for creating a flawed heroine who takes life one day at a time. Megan may have flinched when confronted by the armed looters but she learns from her fear. The grisly murder is offset by Megan's budding romance with Seth, an Army veteran-turned-bomb detonator with the Fort Worth Fire Department. His canine partner, Blast, provides welcome company for Brigit. Brigit makes it clear in her musings that she is the Alpha Dog while Blast is the Beta companion. Megan breaks out of her comfort zone by spontaneously renting a house with Frankie, a Roller Derby skater who carries her own emotional baggage. The move enables Megan to escape from a cramped apartment, give Brigit a yard, and establish a female friendship outside the police force.

As much as I enjoy Megan's character, the "villain" steals the attention in LAYING DOWN THE PAW. I was drawn into his world with disgust and sympathy. It takes a skilled writer like Kelly to simultaneously create those conflicting emotions. Kelly evokes the question of how to define "good" versus "evil" as the "villain" seeks to survive in his grim world of the forgotten poor. Kelly incorporates diverse characters with distinct personalities to create an authentic cross section of our society. Finally, Kelly added small details, such as the ongoing joke of vegetarian lasagna, to create a feel good book despite being a murder mystery. The plot kept my attention and I read this book in one sitting.

I look forward to more books from Kelly to follow Megan's path to detective, Brigit's search for food, the budding romance with Seth, and new friendship with Frankie.

I purchased a copy of LAYING DOWN THE PAW after reading the first two books in the series. 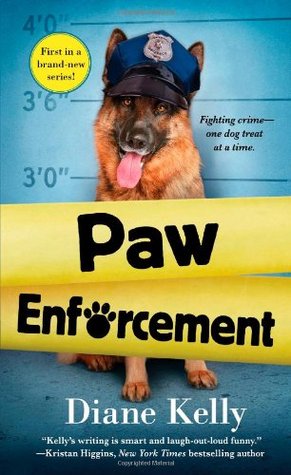 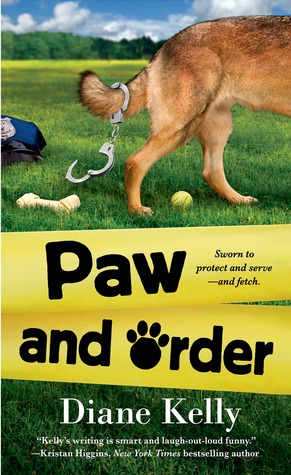 Books 1 and 2 in the series

1. Leave a comment about dogs - what is your experience with them? Although I cohabitate with four cats, I often care for dogs when their owners are away.  Clearly, they love to walk! 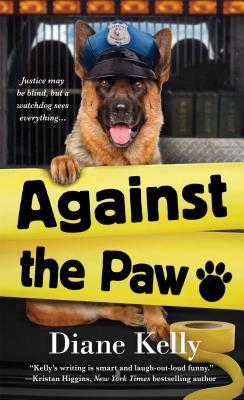