Aloha to Anna Campbell and A RAKE'S MIDNIGHT KISS

Anna Campbell needs no introduction.   This award winning, fun loving, sizzling romance writer offers insight to her life Down Under and her new release, A RAKE'S MIDNIGHT KISS ...

Kim:   Aloha from Baltimore! I am sad that I no longer share an ocean with you. I just reread your bio (link) ... you are a prolific writer with many projects in the past year! What is essential to your writing routine - Tim Tams? Vegemite Sandwiches? Shrimp on the Barbie? (I'm throwing in every preconceived notion that Americans have of Australians).

Anna:  Waving madly at you, Kim! Although I need a REALLY long arm for you to see me now! I was looking forward to visiting you in Hawaii – oh, well, I’ll just have to go to Baltimore instead! Although I’m not sure the surfing is as good.

It’s been a really busy 12 months! A full-length book out and writing another. Three novellas, including DAYS OF RAKES AND ROSES, the Sons of Sin one. And a top secret Christmas project that I’ll go public about in a little while. Phew! I’m advertising for writing elves to move into the basement. In fact, I’m advertising for a basement! They’re not usually part of Aussie houses which may surprise you. So far no replies to either ad!

Laughed at your selection of things to get me going! Tim Tams are way too tempting. Shrimps on the Barbie aren’t a bad idea. I’m positively un-Australian. I HATE Vegemite. Always have. The answer to what helps me pound away on the keyboard (apart from the electricity bill that arrives with annoying reliability!) is tea and music. I write to music, usually soundtracks or classical.

Kim:  Your bio is so funny. You wrote,

Even though my heart has always been with long juicy historicals. I finished seven short contemporary stories, all of which were rejected very nicely by Harlequin. By this stage, under the bed was more crowded than the center of Hong Kong at Chinese New Year. Then I worked on a pile of totally unmarketable historicals, some of which I finished, most of which I didn’t. More boxes for the dust bunnies to eat in the bedroom. You’ll notice housework never featured in my mixed-up career choices.

I, for one, am glad that you kept writing rather than start cleaning! Funny that now your fans could fill the center of Hong Kong! What have you learned from your fans that has influenced your writing?

Anna:  Oh, what a lovely thing to say. So glad the bio gave you a giggle. I think I’d had a glass of wine by that stage of writing it! Because I was unpublished for so long, it’s been slightly surreal and extremely wonderful to have people all over the world reading the stories at last. It really is a dream come true. I’m constantly touched by readers’ generosity. Nothing keeps me typing through an elf-less deadline like a lovely email from someone who’s loved something I’ve written. I’m also delighted that my readers seem to be pretty open to where I want to take the stories. That makes me feel brave as a writer and confident about exploring whatever theme takes my fancy. And I have it on very good authority that one of my readers actually calls upon my name when she’s clutching the plane armrest and bumping around in turbulent air high up in the sky! Now that’s real enthusiasm for a writer’s work! ;-)


Kim:  You share the same name as a wedding designer in Australia, www.annacampbell.com.au. Have you exchanged emails? What kind of wedding dress would your historical heroines like to wear?

Anna:  Isn’t that hilarious? Anna Campbell the designer wasn’t active when I set up my website, but she’s developing a worldwide audience now for her beautiful, romantic dresses. Love that we’re kind of in the same business. We’ve never been in contact, but I’m sure she gets my Google alert messages the way I get hers. I should call in on her shop next time I’m in Melbourne!

You know, now you ask me about weddings, most of my girls do the quick, special license version of a wedding (there’s usually a scandal hovering) so they don’t get the chance for frou-frou on the big day. Clearly, I’ll have to change that. In Regency England, brides wore any color they liked – white weddings were a Victorian fashion. My heroines are women of taste and discernment so I’m sure whatever color it is, the dress will be beautiful and elegant. In fact, very like an Anna Campbell design! 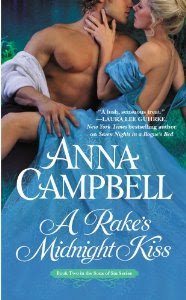 Kim:  Speaking of heroines, tell us about Genevieve Barrett from your new release, A RAKE'S MIDNIGHT KISS? And who is she kissing at midnight?

Anna:  She’s kissing someone she shouldn’t – that’s the whole point of a kiss from a rake at midnight! The funny thing with this book is I had the title before I had much else. A vivid scene popped into my mind of a girl swimming naked in a pond just before a handsome gold-haired man discovers her. They swapped a bit of prickly banter and then kissed. Which sounds great, except that while I knew the gold-haired man was Richard Harmsworth, I had no idea who the girl was. Or how these people found themselves smooching in the moonlight. The rest of the story sprang from my answers to those questions.

Richard had a fairly well established character in SEVEN NIGHTS IN A ROGUE’S BED, however short his appearance, and I asked myself who would be the last woman he’d choose to fall in love with. So I paired London’s most elegant gentleman and most accomplished flirt with a bookish virginal vicar’s daughter who has no time for frivolity. She’s also smart enough to see through his charm to the man beneath which he doesn’t like at all. Genevieve was based on a couple of famous female scholars in Regency England – it was difficult for a woman to establish an intellectual reputation but not impossible. She’s interested in her work, not in men determined to work their seductive wiles upon her, particularly when she’s already worked out that Richard has an ulterior motive for chasing her. As you can probably tell, I had great fun writing these two! Kim:  What's next for Anna Campbell?

Anna:  Well, apart from the top secret Christmas project (if I tell, Santa won’t give me the gift-wrapped Richard Armitage I’ve asked for this year – hmm, and last year… Clearly that request got lost somewhere), I’m currently writing like a fiend on the third Sons of Sin book. It’s Cam’s story. He’s the mega-cool Duke of Sedgemoor who has all the answers in the other books. But when he falls in love with the last woman he ever imagined he would, Mr. Cool gets very hot under the collar and his perfectly arranged life goes south in a big way. The lovely people at Grand Central Publishing have contracted another Sons of Sin book which will feature James Fairbrother, the Marquess of Leath who is mentioned in A RAKE’S MIDNIGHT KISS and DAYS OF RAKES AND ROSES. That one’s a return to the gothic flavor of SEVEN NIGHTS – I always like stories with ruined castles and innocent heroines and heroes who have a touch of the sinister! I’ll start that in the new year and I’m already looking forward to it.

Thank you for having me as your guest today, Kim! Always love to visit! All the best in Baltimore!

1.  What is a "specialty" food from your home town (reference question one).   Maryland is known for its blue crabs boiled in Old Bay seasoning.

On that note, I asked my husband for suggestions to change my moniker from "Kim in Hawaii'.  He suggested "Crabby Kim".  I decided to go with "Kim in Baltimore".

To learn more about Anna and her books, check out her website at annacampbell.info.