Aloha to Laura Trentham and AN INDECENT INVITATION - Book Review 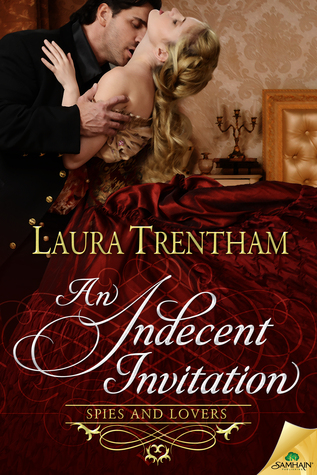 Keeping her safe is difficult, keeping a proper distance from her is downright impossible.

Lady Lily Drummond understands only too well the danger of spy work. Her father, a preeminent master spy, has been missing for months, and her brother barely survived his final mission for the Crown. Lily is still determined to help find her father, no matter how hard her brother and his best friend try to keep her in the dark.

Busy trying to untangle the web of deceit surrounding the Earl of Windor’s disappearance, Crown spy Gray Masterson also has to ensure Lily Drummond, the gangly, awkward child who was his constant shadow growing up, doesn’t get herself ruined at her London debut. But the girl with scraped knees and elbows has evolved into a lush, sensual beauty surrounded by a bevy of suitors.

Realizing Lily is going to investigate on her own if he doesn’t let her join the hunt for her missing father, Gray assumes he can give Lily a few minor tasks to pacify her, but he quickly learns she is a valuable asset. Moreover, she fairly crackles with life and warmth—things he craves after his dark years in service.

Warning: This book contains spies, scandals, naughty liaisons in houses of ill repute, men who think they know everything and women who know they do not.


Every man is surrounded by a neighborhood of voluntary spies. - Jane Austen

Gray Masterson spies a beautiful woman at a London ball, forgoing his task for the evening - make sure his best friend's younger sister is staying out of trouble.  He is surprised to learn the beautiful woman is the gangly girl from his childhood.  No matter what Lady Lily Drummond looks like, she is still stubborn.  Gray must persuade her to abandon her efforts to find her father.  He must keep Lily safe ... and Lily from distracting him from his own investigation to rescue his mentor.

Trentham delivers a romantic adventure wrapped in a spy mystery in Regency England.  Lily is a smart heroine who has learned to flirt her way through London in search for her father.  Yet she has a vulnerable side, including a long standing attraction to Gray.  Gray is an honorable gentleman who can't keep his eyes (and hands) off Lily.  Together, Lily and Gray make a formidable team of friends to lovers, navigating twists in this entertaining read.  The creme de la creme is Lily's brother - the wounded warrior - who will no doubt find love in a future book.

I received a print book from the author for an honest review.

1.  Lily attends a costume ball - what would be your costume?

2.  Comments are open through Saturday, November 7, 10 pm in Baltimore.