Today is a double header - check out my interview with Catherine Mann and COVER ME at this link.  I am giving away three copies of COVER ME.


I woke up on Tuesday morning to hear my roommate, Cathy Maxwell, singing in the shower.  It was a great way to start the day!  I hustled down to the Beau Monde Conference as I volunteered to set up their silent auction.  I hugged my DC area friends - Mary Jo Putney, Sally MacKenzie, Diane Gaston, and many more!


After breakfast, Mary Gramlich and I walked over to Hachette Book Group.   Miriam Parker from Mulholland Books gave us a tour of their offices, shared a few tidbits about the authors, and even tantalized me with special news.  From Anthony Horowitz's website:


Anthony Horowitz, the BAFTA-award winning creator of Foyle’s War and author of the bestselling Alex Rider children’s series, has been chosen by the Conan Doyle Estate to write a new full length Sherlock Holmes novel ... the prologue is currently under lock and key.


THE HOUSE OF SILK will be released on November 1 - here's a link to preorder it from Amazon.   Hubby and I adore Sherlock Holmes - we paid homage to 221B Baker Street during our honeymoon in London.   So you can expect a big celebration here at SOS Aloha when THE HOUSE OF SILK is released!

As we walked back to Times Square, we noticed a crew assembling a stage ... and then spotted Bumblebee!  Not the Tuna ... but the movie Transformers - The Dark of the Moon.   The producers planned a rally in Times Square before the world premiere in a nearby theater.   Mary would later join the crowd in cheering the director and cast during the rally. 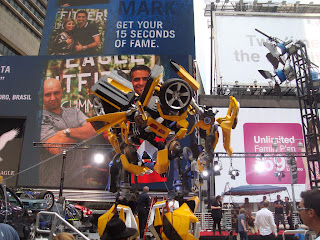 Inside the hotel, I met up with Josie, an enthusiastic reader from the RT Message Boards.  We sampled the Goody Room before volunteering at the Literacy Signing.  It raised over $44,000 for charity!  Sarah Wendell from Smart Bitches Trashy Books posted her video snippets of authors with the Beatles' All You Need is Love - here is the link.   Sarah also posted her Recap at this link, thus demonstrating that RWA offers so much for so many!   I had planned to meet up with the book bloggers in the hotel bar, but I was too exhausted after the Literacy Signing.  But KT Grant/Katie Babs posted three fabulous recap:


Katie also has a cute story about meeting Lisa Kleypas!

In honor of another great day at RWA,  I am giving away a book of choice to one randomly selected commenter from my RWA book stash.  To enter the giveaway,

1.  Leave a comment what would impress you most - touring a publishing house, seeing Shia LaBeouf, or meeting Lisa Kleypas.