Homicide detective Mick Giovanni has seen lot a strange things in the NYPD-but nothing like Miss Lettitia Merryweather. Waltzing into his precinct dressed like some actress on Masterpiece Theater, the stunning British beauty implores Mick to find her missing sister. The strange part is, she disappeared in London-in 1888. Of course, Mick doesn't believe Lettitia. Until he steps through a time portal onto a gaslit street-and sees a newspaper headline that reads:Jack the Ripper Still At Large . . .

For Mick, it's the dream of a lifetime-a chance to hunt down the most notorious killer in history. But for Lettitia, it's all too personal, and Mick is her only hope. The tough, handsome cop has only seven days to solve the world's greatest mystery before he loses his chance to go home. But the closer Mick gets to the truth, the deeper his feelings for Lettitia grow. Even if he solves the case, can these two soul mates say goodbye to a love that was meant for all time? 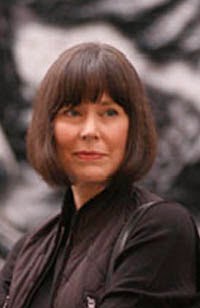 Chloe Palov, writing romance as Chloe Douglas, was born in Washington, D.C., and graduated from George Mason University with a degree in art history. Although she began her writing career in the romance genre, Chloe switched gears several years ago, making the leap to thrillers, written under the name C.M. Palov. Chloe is excited now to be returning to her romance roots. Chloe lives and writes with a menagerie of furry family members from her home in Virginia. 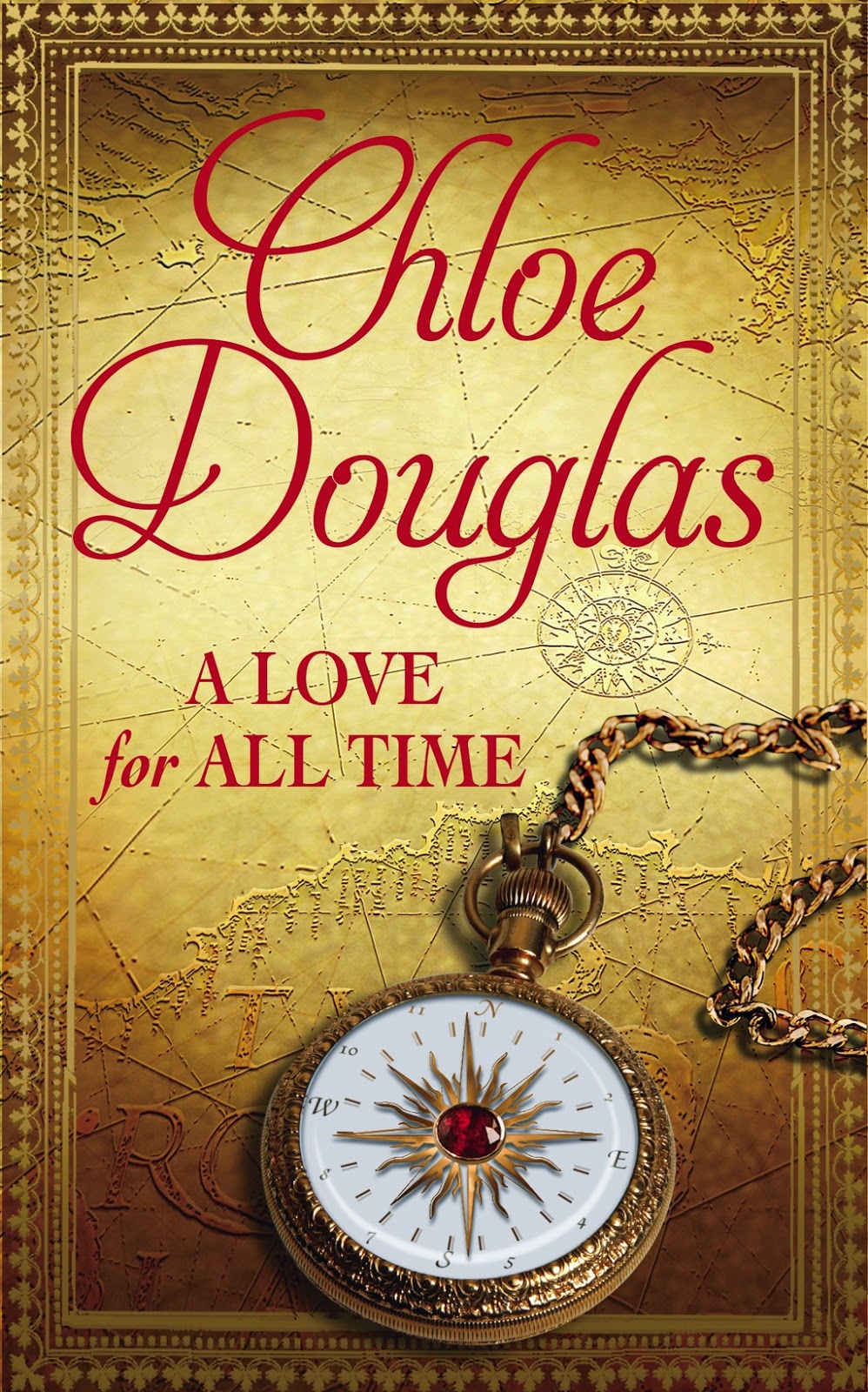 I am giving away a digital copy of A LOVE FOR ALL TIME to one randomly selected commenter. To enter the giveaeway,

1.  Leave a comment about Victorian England - what intrigues you about it?

Forever Romance offers an excerpt from A LOVE FOR ALL TIME:

“Whoa. Serious fire power,” Mick uttered with a drawn-out whistle. “I’m glad we’re playing on the same team. Where did you get that thing?”

“It is Uncle Phidias’ service revolver from the Crimean War. After what transpired at The Golden Dragon, I thought it best to take precautions. One never knows where one’s investigation might lead.”

Smiling approvingly, Mick nodded his head. “You gotta be impressed with a lady who thinks ahead, hey guys? Now, I’m no expert on relic firearms, but that thing looks like it could take off a man’s head.”

From the chorus of muttered grunts, she surmised that the remark had a similar effect on nearly every man present.

“Is that bloody thing even loaded?” Sweeney demanded to know, eyeing the monstrously large revolver with obvious trepidation.

“Of course it is loaded,” she snapped, thinking the man a simpleton. “Why would I go to the trouble of aiming an unloaded gun at you?”

Humph! Easy for him to smirk and snicker. He was not the one who would have to pull the trigger, quite possibly severing a man’s head from his body.

Slipping his hand inside his coat pocket, Sweeney extracted a sinister-looking knife. He tossed it into the air, deftly catching it by the carved handle. He then took a menacing step in her direction.

Lettitia had hoped that reasoned talk would prevail. Her hopes, however, were instantly dashed the moment Sweeney drew his weapon.

“Sir, you would be wise not to accost me,” she warned. “Furthermore, if you take one more step, you will not live to tell the tale.” She added the last bit of braggadocio to let the brigand know that she was in earnest.

Sweeney came to a halt. “You can’t shoot all of us. At the most, you’ve only got six bullets.”

“True enough,” she readily agreed. “Which means that two of you shall not feel the excruciating pain of a deadly bullet ripping through his tender flesh.” Having made her point, she gestured with her revolver to the company of men spread before her. “Whoever wishes to remain unscathed, I suggest he leave the premises now.”

To her utter surprise, six of the hooligans departed posthaste, leaving only Jem and Sweeney to contend with.

“If I did the math right,” Mick remarked, “that leaves three bullets apiece.”

“And I don’t like some Mayfair bitch threatening the likes of Bill Sweeney,” he countered belligerently. “In fact, I’m beginning to think that you’re all bluff.”

“Think what you will. Unless you release my companion, you shall soon discover the truth of the matter.”

Digging in his heels, Sweeney stubbornly shook his head. “Sir Charlie will ‘ang me by me balls if I was to come back empty ‘anded.”

Lettitia worriedly gnawed on her lower lip, the man’s obdurate refusal to untie Mick presenting her with a true dilemma. As she pondered her options, a bolt of lightning struck in the near-vicinity, instantly followed by an earth-shattering boom of thunder. Startled, Lettitia gasped, at which point Sweeney seized his chance and rushed toward her, his knife blade threateningly pointed at her heart.

With a terrified shriek, Lettitia pulled the trigger on the revolver.

The moment she did, Mick rose to his feet. Still bound to the wooden chair, he spun on his heel, forcefully slamming the wooden legs of the chair into Jem’s backside, the man crumbling to his knees under the force of the blow.

“The bloody bitch just shot off the top of me ear!” Sweeney hollered, dropping his knife as he slapped both hands to the side of his head, blood spurting between his fingers.

Wailing like a banshee, evidently afraid that she might pull the trigger yet again, Sweeney ran for the door. His minion, staggering to his feet, did likewise.

Wasting no time, Lettitia picked up the knife so that she could cut Mick free. The instant the chair crashed to the ground, he snatched both the gun and the knife out of her hand.

“You, Lettitia Merryweather, are one dangerous lady. Come on. Let’s get the hell out of here.” Grabbing her by the arm, Mick raced towards the door.

Outside, the rain came down in blinding sheets, soaking them to the skin. As they ran through a maze of alleys, the sky detonated with a brilliant burst of bright light, the buildings around them shaking with the thunderous encore. The wind, the rain, the lightning - under any other circumstance, Lettitia would have been terrified by those elemental forces. But for some reason, here, with Mick, it was exhilarating.

Panting, Mick came to a sudden halt at the intersection of two alleys. Gesturing to the right, he hollered, “It’s this way!”

“No, it’s this way!” Lettitia exclaimed, pointing in the opposite direction. “I’m quite certain that¾”

“Always,” she affirmed, placing her hand in his.

Hand in hand, they hurried to Dorset Street, Lettitia laughing with joy as they raced to the carriage.

Once inside the vehicle, she couldn’t stop laughing. Seized with a giddy euphoria, all of her senses were enlivened with an urgent sense of excitement.

Unthinkingly, she flung herself at Mick’s chest. “Kiss me,” she ordered, throwing her arms around his neck.

“You’re just saying that because of the adrenaline rush. The thrill of the chase has got your hormones in a tailspin.”

“I have never been so thoroughly and deeply thrilled!” Lettitia exclaimed, not understanding a word that Mick just uttered.

“Me either.” Grasping her by the nape of the neck, Mick savagely kissed her.