Aloha to ML Buchman and LIGHT UP THE NIGHT 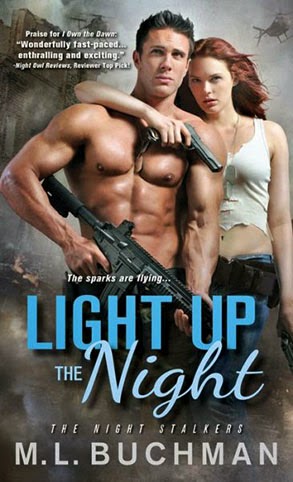 I have a special treat for you - a guest post from ML Buchman!

There’s a little sign that hangs right above my writing computer. It’s on my website, my business card, and in my brain when I’m writing:

To Champion the Human Spirit

That is the guiding principle of everything I write. What’s surprising to me as an author is how many odd ways that finds to express itself. It isn’t only in the happy-ever-after moment at the end of the romance, nor just the moment that my hero and heroine finally get past their own challenges enough to realize that the other person in the book is the only one on the planet for them.

No, I discover signs of it even in the first meetings. Here are three quick examples from my newest installment in my “Night Stalkers” series, Light Up the Night.

Flying an AH-6M was as close to flying with nothing between you and the sky as existed. No door beside you and a clear windscreen offered bullet-resistant protection from below your feet to farther back than you could tilt your head while wearing a helmet. Everything a girl needed for a good time.

When she’d named her bird May, everyone thought it was some stupid woman joke. But any fool who teased her about it being the Merry Month of…or Mayfly soon learned that it was short for Mayhem. She never had to explain it twice.

Navy SEAL Lieutenant William Bruce squatted in the dust, wearing the standard clothes of a mercenary soldier looking for a quick buck by joining the Somali pirates. Bill wore camo pants, a dark tank-tee, and a black sweatband. He carried a very battered but immensely serviceable M-16 which marked him even more clearly as a merc for bringing his own weapon with him.

Bill slid out the door and moved in the darkest shadows of the moonless night, tight against the adobe walls on the right side of the street. At the last doorway before the cross street, he turned in. The three women yachties had been separated from the others and were tied to beds. So no guard. They were battered and bruised, but he was pretty sure that they’d only been mishandled, not raped. It had taken some risk, but he’d convinced Mahan that unless he wanted serious retribution after they were ransomed off, he’d better not let his men make a holiday of the ladies.

As to them meeting each other (after she rescues him from near certain death):

“I didn’t want a goddamn rescue!”

Trisha let him rant while she shut down the May. She made a point of chatting with Roland for a moment before she peeled off her helmet and turned to face the raging idiot. The red deck lights for night operations were bright enough that he’d be able to see her clearly. That usually stopped guys cold.

“Oh fine. A woman. Now I’m probably going to have my ass reamed for yelling at a woman.” Then he continued right along, chewing her out without further pause, which was pretty funny. She let him rant, figuring he’d feel better if he could burn off some of his excess, over-righteous macho.

Embedded agent. She’d expected a skinny black Somali with a rusting AKM rifle looking for a ticket to America. This guy was white as could be and built like a linebacker. Out-and-out crazy to go undercover in Somalia looking the way he did. Which, she had to admit, was pretty good despite the ratty clothes and smelling like he’d had a couple dozen too many nights in the desert without a shower. Actually, linebacker looked damn good on this guy. She liked them big and handsome. She also liked his temper. Guys who just rolled over and played puppy dog when confronted with a cute woman were dull and predictable. Mr. Agent Man…

She climbed down and set her helmet on her seat. Even standing up straight in her boots, he towered over her. Six foot, maybe six-two. SEAL or Delta. Hard to imagine a Delta Force operator yelling at her. D-boys rarely even spoke and were rarely over five-eight. So he was a SEAL. It was the blue eyes, eyes that blazed with fury at the moment, that were his outstanding feature.

“Champion of the Human Spirit” just pours out of these folks. It’s one of the things I love about my Night Stalkers. I guess that’s how it ends up there along the way. 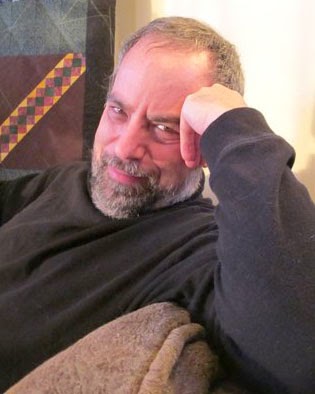 Mahalo, ML Buchman, for joining us today!  He is celebrating the release of LIGHT UP THE NIGHT:

Trisha O’Malley rebelled against her affluent family by joining the U.S. Army’s secret helicopter regiment, the 160th SOAR. Now a Chief Warrant Officer, she found her toughest fight yet in the pilot’s seat of an MH-6M attack helicopter.

William Wallace Bruce is an undercover CIA agent who doesn’t trust the military. But when the Horn of Africa is threatened by Somali pirates, Trisha flies out to recover ships and hostages…including one very ungrateful Will. Everything about Trisha triggers his mistrust: her elusive past, her wild energy, and her proclivity for flying past safety's edge. Even as the heat between them turns into passion's fire, Bill and Trisha must team up to confront their pasts and survive Somalia's pirate lords.

He is now a full-time writer, living on the Oregon Coast with his beloved wife. He is constantly amazed at what you can do with a degree in Geophysics. You may keep up with his writing at mlbuchman.com.

LIGHT UP THE NIGHT takes place in the Horn of Africa ... and I have friend who is currently deployed to support the special forces in that area.   Let's leave comments for those who are serving ... and I will ask Sourcebooks to send a print copy of LIGHT UP THE NIGHT to my friend.

Posted by Kim in Baltimore at 9:46 PM