Wendy LaCapra is celebrating the release of DUCHESS DECADENCE, Book 3 in the Furies series.  I asked her to name the top 5 decadent people from the Georgian Era ...

Lady Worsley’s Whim, the brilliant book by Hallie Rubenhold, sparked the idea for The Furies Series. In the book, the author describes a ‘sisterhood of the fallen fair.’ Unlike the demi-reps, who were forced to live on the largesse of male protectors, these ladies of the demi-monde, or half-world, were high-born and wealthy, but possessed doubtful reputations which limited their movement among the haute ton, forcing them to develop other resources for friendship and survival.

Like my fictional Lady Sophia, Lady Harrington used her home as an unofficial gambling house. She and her husband enjoyed an exceptionally shocking lifestyle, with both frequenting Sarah Prendergast’s elite brothel on King’s Place.

As an heiresses possessing a distant connection to Duke of Somerset, Seymour Dorothy Fleming could have led a staid life as a society hostess. But her marriage to studious, cold baron left her with an insatiable hunger for love. Her many affairs had the tacit approval of her frigid husband until the day she ran away with a lover and demanded a divorce. The subsequent scandal rocked the society and left her an outcast most of her adult life.

Henrietta Vernon met her husband in a romantic nature (caught in a rainstorm), and despite being on 14 and 35 years his junior, married Lord Grosvenor less than a month later. He was an accomplished politician, race horse breeder, and, unfortunately for the new Lady Grosvenor, another frequent brothel patron. The young Henrietta sought her happiness in the arms of other lovers, and, after she was caught in a VERY compromising position with a royal duke, was separated from her husband. She lived on her allowance from him, reportedly taking a new lover to the opera every night.

Unlike the ladies above, the following two notorious women were not high born, but that did not stop their exploits from becoming on dits worth noting.

Grace was raised in a French convent, and nothing prepared her for the kind of society she met after marrying a wealthy Edinburgh doctor. According to one magazine, “no little pains were taken by the doctor’s friends to introduce his wife’s beauty to public attention.” As it turned out, the vivacious beauty attracted a great deal of attention which lead to an affair with the married Lord Valentia and a subsequent divorce. Subsequent lovers included the Prince Regent.

Not much is known about the birth and family of Elizabeth Cane, aka Mrs. Armistead. But she had been working in a London brothel for some time when she became exclusive mistress to Lord Bolingbroke, who encouraged her aspirations for the stage. Subsequent protectors included a General, a Duke and, eventually, the Prince of Wales. Her final lover, the Whig Politian Charles Fox, didn’t have the funds to support the lifestyle Elizabeth had been living. Their relationship, however, turned out to be the real thing. She sold her properties and settled down with him. The two were secretly married. The marriage eventually became public, and after Fox’s death, Elizabeth enjoyed the honor of being a statesman’s widow.

So there you have it, five Decadent ladies of the Georgian Era. Thank you for having me, Kim! 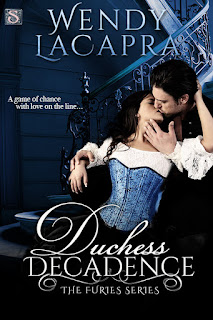 Thea Worthington, Duchess of Wynchester divides her time between social engagements and playing her luck against fickle fortune. Yet every gamble is only a bluff—a means to hide from the pain deep within her, and the loss of a babe she never held in her arms. Now Thea's luck is about to run out. Her estranged husband has returned and seeks a reunion...

Plagued with guilt over what happened to his wife three years ago, the Duke of Wynchester has kept his distance. The duke is resolved to piece his family back together, especially now that he's discovered his beloved brother—long thought dead—still lives. But Thea's lovely, porcelain facade is on the verge of cracking...spurred on by the duke's brother's secretive, malevolent animosity.

With everything riding on her future, Thea plays a daring game of chance for love and her marriage...and this time, the dice are most certainly rigged. 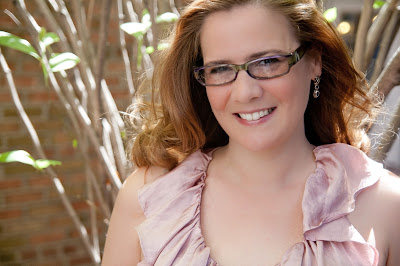 Wendy LaCapra has been reading romance since she sneaked into the adult section at the library and discovered Victoria Holt & Jane Aiken Hodge. From that point on, she dreamed of creating fictional worlds with as much richness, intrigue and passion as she found within those books. Her stories have placed in several contests, including the 2012 Golden Heart®. She lives in NYC with her husband and loves to hear from readers.

She tugged at the edges of her gloves and laced her spine with steel. She had known returning to the duke was not going to be easy.

Wynchester cast a sideways glance. “Are you steady?” “Quite.” She shined her enameled smile. I can do this.

“Tonight,” he said low, “we must show unity—the Worthington family, as one.”

“You’ve made your wishes,” her eyes flashed, “and your priorities, clear.”

“Good,” his response was clipped. His gaze searched hers for an extended breath. He lowered his voice. “If you had spoken to Eustace the way he spoke to you, I would have answered in the same way.”

Her enameled smile turned brittle. “You are very talented at lecture.”

“At the very least,” anger flashed across his features, “you have acknowledged my talent for something.”

“Many things.” She put up her gloved fingers one by one. “Set-downs, cuts direct, efficient marshalling of your sycophants…”

He frowned. Then, his anger melted away into an ironic smirk. “At least I can coerce someone to listen to direction.”

She squinted. “I am not a sycophant.”

“No.” He made a leg—a brief bow that mocked more than it paid tribute. “My non-sycophant, duchess, I ask of you a boon.”

Despite herself she nodded.

Please was not something one heard often from a Worthington. Her anger transformed into another, just as visceral response: challenge. She decided she’d like very much to hear him say please again. Her gaze traveled over his face and then followed the line of his jacket to his breeches.

Yes. Another please would be more than acceptable.

“Ah, Wyn.” She reached up and cupped the hard angle of his ever-so-perfectly shaved cheek. “I will behave…” she made her voice low and husky and leaned forward, “if that is what you really wish.”

Wynchester’s eyes grew entirely black. She sent him a warm smile, and then turned. As she walked away toward the solace promised by the Furies, she felt his gaze on her back with every step.

She’d always had a penchant to notice little things. Like the way Wynchester’s eyes grew dark when surprise cut through his armor. Odd such perception should quell her anger and save her tonight. When she was small, it had been her downfall.

Grandmother, there are small clouds trapped in the diamonds on your bracelet. Is that why you have to sell it? There’d been clouds in her grandmother’s eyes, too, as she responded. Silly child. Sit down.

Since then, she’d kept most of her insights to herself.

Her gaze flicked to the far corner and she noticed Eustace’s smile. It enveloped his cheeks and wrinkled his forehead, but his eyes remained largely unaffected, like the eyes of someone far away. Those eyes turned on her and a chill passed through her veins.

She held his gaze for a moment, sending her own silent message.

I will protect Wynchester at all cost.

Eustace gave her a mocking bow. 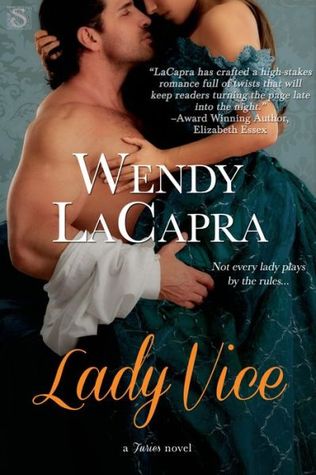 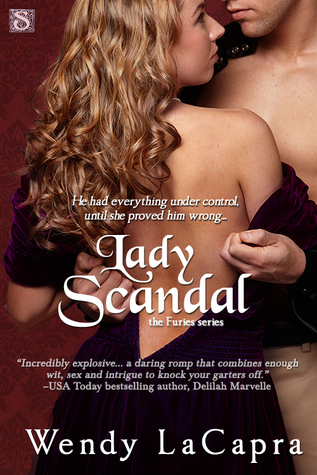 Other books in the Furies series ....