Aloha to Annie Knox and PAWS FOR MURDER (Pet Boutique No. 1) - Book Review 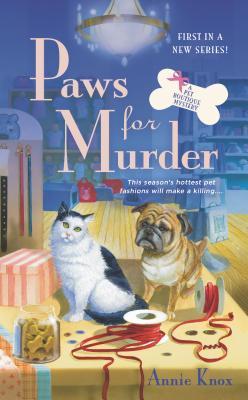 Izzy McHale wants her new Trendy Tails Pet Boutique in Merryville, Minnesota, to be the height of canine couture and feline fashions. But at the store’s opening, it turns out it’s a human who’s dressed to kill…

Izzy’s own beloved pets are dressed to the nines for the grand opening of Trendy Tails. Feisty feline Jinx is large and in charge, and happy mutt Packer is lapping up the attention. Izzy and her best friend Rena have their hands full meeting Merryville’s menagerie and serving tasty pupcakes and kitty canapes from their “barkery.” The last thing they need is the town’s local activist, Sherry Harper, scaring off customers and getting tongues wagging by picketing the event.

The two manage to stop Sherry’s protest in its tracks, but the trouble for Trendy Tails is just beginning. Sherry is found murdered in back of the shop, and Rena is immediately named as the lead suspect. Now Izzy and her furry friends have a new pet project—collaring a killer. 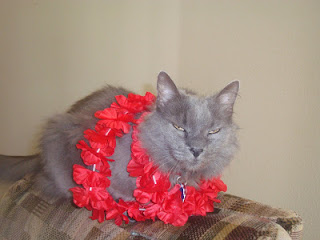 I recently traveled to Tampa, Florida, for family business.   Since I could not pack a cat for comfort, I grabbed Annie Knox's PAWS FOR MURDER instead.  I finished the book on the two and half hour flight - a milestone for me since I am a slow reader.  PAWS FOR MURDER kept my interest, even through the turbulence (which makes me nervous).

PAWS FOR MURDER kicks off a new cozy mystery series featuring first time business owner Izzy McHale as she launches a pet boutique, relying her seamstress skills and her best friend who bakes pet treats.  Trendy Tails Pet Boutique is her opportunity to emerge from the shadows of a long term relationship that ended suddenly - a one side partnership in which she put her dreams on hold to support her fiance.  He repaid Izzy's loyalty by leaving for a high paying doctor's job in New York with another woman.  Izzy is optimistic in capturing the tourist trade in her hometown of Merryville while reconnecting with childhood friends.  Her optimism is briefly shattered when a local activist is murdered behind her shop during its grand opening.

PAWS FOR MURDER cooks up the same recipe for cozy mysteries - small town charm, humorous quirky characters, a few red herrings, and an unexpected murderer among the townsfolk.  The pets, including Packer the dog and Jinx the cat, added to the mayhem.  What kept me reading was Izzy's efforts to rebuild her life and reestablish relationships which she allowed to go to the wayside while she pandered to her feckless fiance.  I also learned about Minnesota - I felt I was transported to the fictional town near the headwaters of the Mississippi River.

Izzy used the word "hoosegow" several times.  I was not familiar with the term but assumed it was a slang word for jail. The day after I arrived in Tampa, "hoosegow" was a clue on Jeopardy!   Hoosegow is a corruption of the Spanish word juzgado, a panel of judges.  Luckily, Izzy kept her best friend (and business partner) out of the hoosegow by uncovering the murderer.

I found PAWS FOR MURDER in a box of books I bought from my church's yard sale. 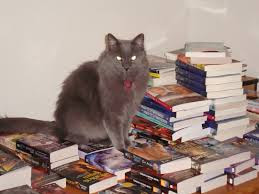 Lucky is giving away a book choice from his convention stash to one randomly selected commenter.  To enter the giveaway,

1. Leave a comment about Jeopardy!- what would be your best and worst categories?  My best category - history.  My worst - opera.

For those readers unfamiliar with Jeopardy!, it is a popular quiz show at this link.

2. Comments are open through Saturday, January 23, 10 pm in Baltimore.

Learn more about Annie and her books at annieknoxauthor.com. 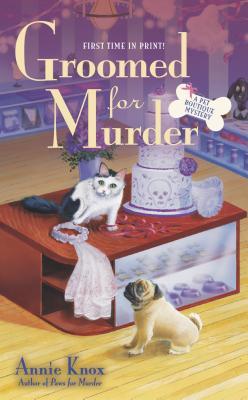 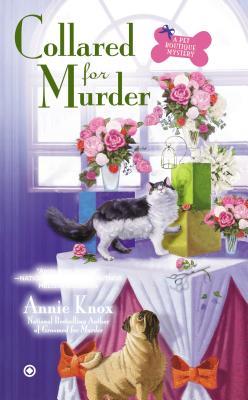