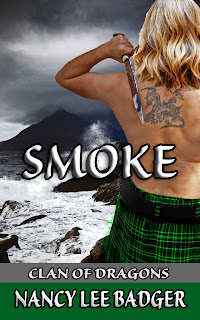 Nancy Lee Badger joins us for a guest post ...

When I decided to write a series called Clan of Dragons, the time had come to take advantage of my son. He had served in Iraq, had attained the rank of Drill Sergeant, and had retired from service, but I told him many years ago that I wanted to use him as a cover model the next time I wrote a series that included dragons. The reason? The large dragon tattoo on his back. Since Eric travels all over the country as a cell tower inspector, getting him to visit on a sunny day, so I could photograph him outside on my deck, took some planning. 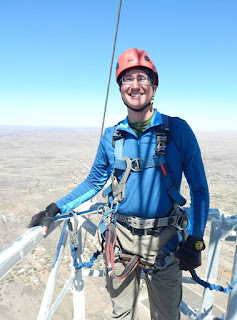 The day came, and he brought his collection of swords and dirks, and I snapped over a dozen poses of him dressed in his dad’s Clan MacBean red and black kilt.. I purchased a photo of the foggy peaks on the Scottish island of Skye, where the series is based, and used Photoshop to ‘color’ the kilt to match the green kilt in my story, and added blond hair. The result became the cover of SMOKE, the second book in the series. 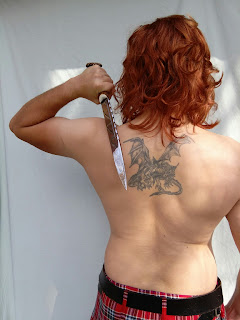 I am using other poses for the next book, SMOLDER, which transforms Eric into a warrior with long black hair. I am very proud of my son’s service to his country, and for helping his mom with this project.


A dragon beneath a full moon might howl, but would still breathe smoke.

The green dragon tumbles off a craggy peak, and lands in a pile of snow. When someone walks on Wynn’s head, he jumps free, and accidentally slams a wolf against a tree. When the unconscious beast shifts into a naked female, explanations are in order. Wynn enjoys shifting into a wolf to run through the forest, but she is a stranger. When she wakens, he explains he and his two brothers mean her no harm. After she allows them to carry her injured body into a cave, his brother Evan’s mate, Vika, cares for her. Kera reveals she is hunting a human, who might be a pirate. Wary about the golden-haired shifter’s mission, Wynn fears for her safety, and his heart.

While tracking the human who murdered her lover, Kera awakens in deep snow to dragons staring at her. One looks as if he wants to eat her, and the other smells like smoke. With an injured hip, and no energy to shift back into her wolf, she allows a pretty human to care for her. The dragons take up her search, but the pirates enter the cave. Kera leads the pregnant human into the underground river. Only by fighting for their lives do they escape. While assisting a human lad in the village, a man recognizes her, and abducts her. Wynn shows up in human form, and they fight against the man who is the cause of her nightmares. Her wolf pack wants her back, but the dragon has stolen her heart. Will she stay in Wynn’s bed, return to her pack, or possibly die while killing her lover’s murderer? Either way, her life will forever change.

The odor of the dragon’s breath overpowered the scent of pine and fresh-fallen snow. Kera ran a hand down her leg, and didn’t feel any blood, but the limb throbbed. When heavy footsteps grew closer, a momentary wish to dip her body into the nearest fairy pool disappeared. How foolish. The urge to escape beneath its cool, clear water, or feel the massaging action of a cascading waterfall, was not strong enough to forget her current predicament, or the wintry weather.

The dragon moved toward her as it circled the tree. Its long white fangs glistened, and its hot breath melted the snow at her feet. Kera searched the area for a weapon. Unfortunately, the snow around the tree was heavy, and had covered everything.

Gazing upward, she thought to grab a limb and climb to safety, but she stopped when an odd voice said, “I apologize.” Who spoke to her in the presence of a dragon? Curiosity would be her downfall someday, but she peered from behind the tree and saw the green dragon, and only the dragon.

I be speaking to a dragon? Did I hit me head as well?

“Aye, lass,” the dragon said. “I apologized. I did not mean to throw you so hard, but your wolf form surprised me. There be friends of mine nearby whom I wish to protect. I can…ahh…see you be not only a wolf.”

With her secret out, a weight lifted from her shoulders. “I, also, apologize. I hope I did not hurt you by walking on your head. I heard something fall from the mountain, then I smelled you and…I was too curious for me own good.”

“You have a lovely smile, but I see pain in your eyes. Be you injured?”

She nodded, then immediately wondered if admitting her vulnerability made her a target. While contemplating her next move, the dragon leaned closer and sniffed her hip.

“No blood. You should come with me.”

Before she could answer with a resounding nay, a roar shook the tree, and dumped snow from the branches above them, onto their heads.

Thank you, Nancy, for your family's service!  Nancy is giving away a digital copy of SMOKE to one randomly selected commenter. To enter the giveaway,

1. Leave a comment about heights and/or tattoos .... would you climb a cell tower?  Do you have a tattoo?  That's a negative on both accounts for me!

My favorite dragon is Nessie, often seen from Urquhart Castle on Loch Ness.