Aloha to Shana Galen and SAPPHIRES ARE AN EARL'S BEST FRIEND An Interview with The Darling of the Ton
By Shana Galen

Thanks for inviting me back to SOS Aloha, Kim. I’m really excited to introduce readers to my new book, Sapphires Are an Earl’s Best Friend, and my new hero, Andrew Boothe-Payne, the Earl of Darlington. Here’s a short interview with Lord Darlington where we discuss everything from opera to gymnastics.

Shana: Lord Darlington, can you tell the readers a bit about yourself?

Darlington: Of course, I’m amiable, witty, and charming. That’s why I’m called the Darling of the Ton. It’s no surprise you wanted to write about me. When did you know you wanted me to be the hero of Sapphires Are an Earl’s Best Friend?

Shana: I think it was the first time you walked onto the page in When You Give a Duke a Diamond. I just knew there was more to you.

She slowed her conveyance, hesitating slightly when she noted one of the gentlemen was the Earl of Darlington, known as the “Darling of the Ton” because of his good looks and affable personality. He had been pursuing her for the last six months, and though she had made it clear in every way she knew how that his attentions would not come to fruition, he had not given up the chase.

Shana: I believe that was Juliette’s point of view. If I’m not mistaken, you were quite in love with her.

Darlington: That introduction was not exactly what I had thought. I will admit I had a minor infatuation with Juliette until she married that lout the Duke of Pelham. But let us speak of something else. Perhaps more about my good looks?

Shana: In Sapphires Are an Earl’s Best Friend, Lily does seem rather affected by your tight breeches.

Darlington: But of course she is. Let’s share that excerpt.

Shana: Lord Darlington, I am conducting this interview, not you. I know in When You Give a Duke a Diamond, you suffered the loss of your mother. How are you coping?

Darlington: I’m fine. It’s my father that is most vexing. The man has been going about Town chasing every light skirt he sees.

Shana: Including Lily, the Countess of Charm?

Darlington: Yes. I thought she had better taste than that.

Shana: Interesting. She has often commented on your poor taste and your preference for opera singers.

Shana: Of course you do. And what of acrobatics? I seem to recall that you made a promise to stand on your head in When You Give a Duke a Diamond. Do you finally fulfill that promise in Sapphires Are an Earl’s Best Friend?

Darlington: I am certain I have no idea what you mean. If I did make good on such a promise, I certainly cannot give you details. I don’t kiss and tell.
Shana: Kissing? So you admit you have given up for infatuation for Juliette and have fallen for Lily?

Darlington: Not at all. I am simply trying to protect my father from someone after his money and title. If I have been spending more time with Lily lately, it is only because she has so many intriguing secrets. I intend to discover them all.

Shana: Good luck with that, Lord Darlington. Here’s a short excerpt from Lily and Andrew’s first meeting in Sapphire Are an Earl’s Best Friend.

A commotion erupted in the vestibule, near the door where Andrew had stationed himself. The butler, who had been announcing the guests, stepped away and returned a moment later with a woman who could only be described as delicious.

Andrew’s gaze traveled from her tiny waist to her rounded breasts to the pale, porcelain skin of her cheek. Ruby earrings dangled from small shell-shaped ears, reflecting light on the curved slope of a delicate neck. Green eyes flashed at him, and a sensual mouth smiled. He felt his blood warm and begin to pump faster as she gave him a saucy wink.

“The Countess of Charm!” the butler announced, and the drone of voices rose again.

Andrew shook his head. Lily? That was Lily? He watched her glide through the ballroom, seemingly unaware of the attention she created. No wonder there had been a dispute when she’d arrived. Not only was she a notorious courtesan, but she had reportedly caught the attention of—who else?—the Duke of Ravenscroft. Otherwise known as Andrew’s father.

And that was why Andrew was here. He’d wanted no part of London and had been about to return home when he’d heard the rumors—the Duke of Ravenscroft intended to seduce the Countess of Charm and then make her his wife. For the woman who, it was rumored, had ruined the Prince of Wales for other women, no enticement but that of the title of duchess might tempt her into the old duke’s bed. And here she was, probably hoping to lay her claim to that title.

Andrew would make certain she did not.

To learn more about the Sapphires Are an Earl’s Best Friend preorder gift, check out Shana Galen’s Facebook Page for more information at this link.  Send your proof of preorder before February 28th! 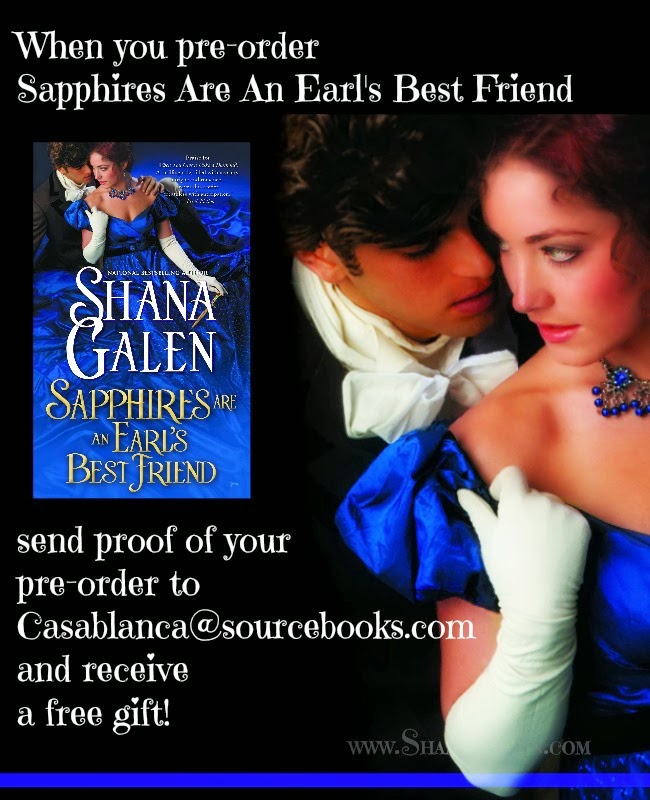 Follow along on the Jewels of the Ton Pre-Publication Tour—with chances to win books and jewelry at each stop!

2/19 Romancing Rakes for the Love of Romance – Citrine

2/21 Reading Between the Wines – Ruby

2/24 Ramblings From This Chick – Pink Sapphire

Lily Dawson, dubbed the Countess of Charm by the Prince Regent himself, plays the role of the courtesan flawlessly while her real purpose is spying in the service of the Crown. Her mission now is to seduce a duke to test his true loyalties. She'll do it, even though the man she really wants is Andrew Booth-Payne, Earl of Darlington—the duke's son.

Andrew is furious when he finds himself rivaling his father for Lily's attention. When he uncovers Lily's mission, Andrew is faced with impossible choices. It seems he is destined to betray either his family, his country, or the longings of his own heart...

Early Praise for Sapphires Are an Earl’s Best Friend:

“One of Galen’s most adventurous tales yet. This wild ride of a spy thriller sparkles with banter and radiates passion.” —RT Book Reviews, 4 ½ Stars, Top Pick of the Month

“The road to happily-ever-after is intense, conflicted, suspenseful and fun.” —Kirkus Reviews

“Courage, honor and strength are the qualities which will continue to bring you back to Galen’s series and keep you in anticipation of what’s next. Order early and happy reading!” —Gourmande Girl 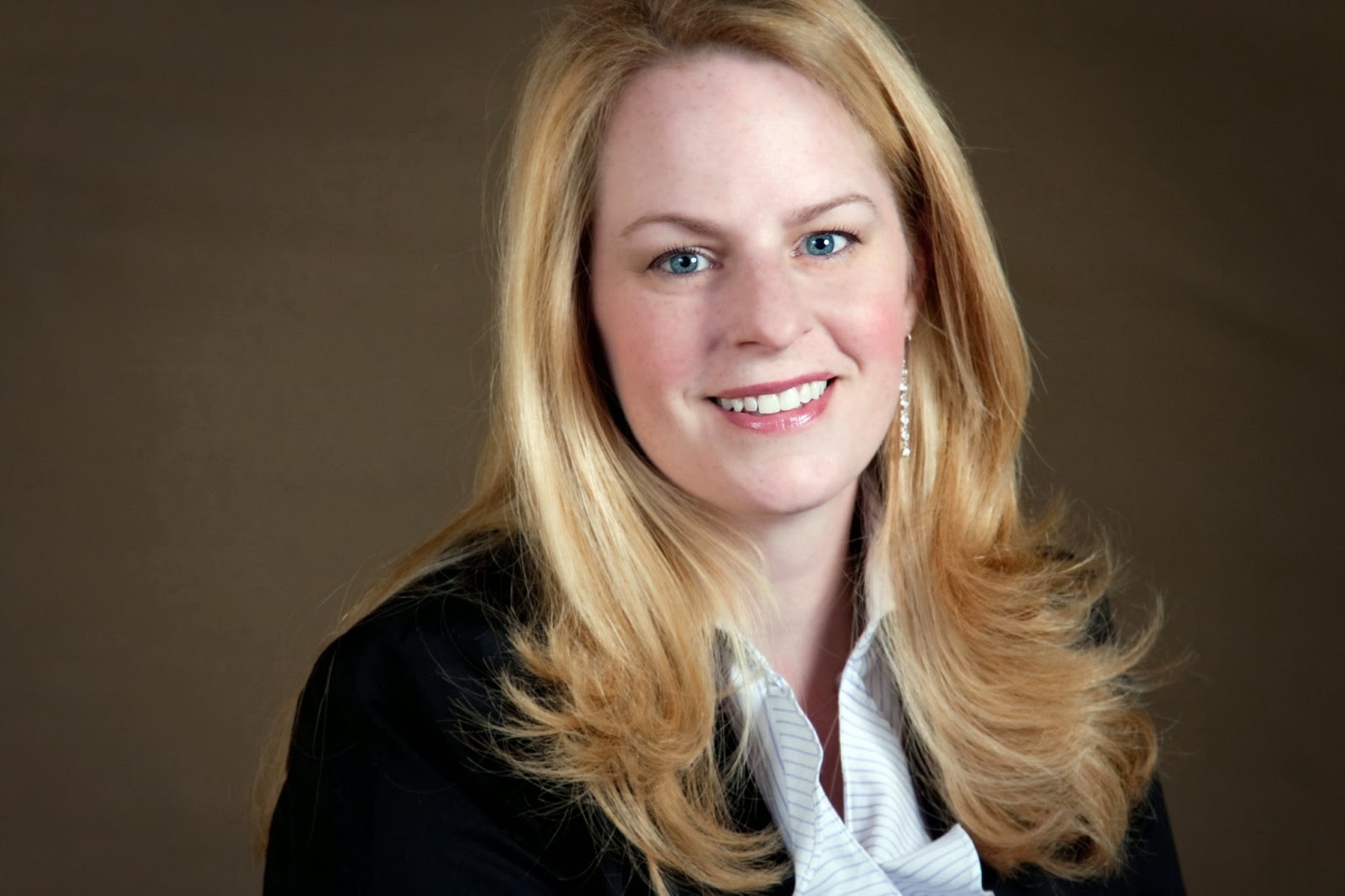 Shana Galen is the national bestselling author of fast-paced adventurous Regency historicals, including the RT Reviewers’ Choice The Making of a Gentleman. She taught English at the middle and high school level off and on for eleven years. Most of those years were spent working in Houston's inner city. Now she writes full time. She’s happily married to a man she calls Ultimate Sportsfan and has a daughter, Princess Galen, who is most definitely a romance heroine in the making. Shana loves to hear from readers: visit her website at shanagalen.com, download her free author app for exclusive content and first looks, or see what she’s up to daily on Facebook and Twitter.

Mahalo, Shana, for joining us today!  I am looking forward to SAPPHIRES ARE AN EARL'S BEST FRIEND!   Here at SOS Aloha, Amethyst is our best friend!   Sourcebooks is giving away an Amethyst pendant plus the first two books in the series:

WHEN YOU GIVE A DUKE A DIAMOND (link)

IF YOU GIVE A RAKE A RUBY (link)

1.  Leave a comment about the February's birthstone - the amethyst ... I'll give you a hint from the American Gem Society (link):

Amethyst, the gemstone believed by ancient Greeks and Romans to ward off the intoxicating powers of Bacchus, also is said to keep the wearer clear-headed and quick-witted. Throughout history, the gemstone has been associated with many myths, legends, religions, and numerous cultures. English regalia were even decorated with amethysts during the Middle Ages to symbolize royalty.

2.  Sourcebooks' giveaway is open to readers in the US and Canada.