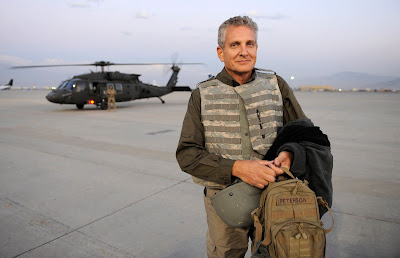 I don't often feature male authors on my blog, but when I do, I go for the best.  Thriller author Andrew Peterson joins me today for an intimate chat ...

Kim:  From your bio, you grew up in San Diego - a military town! Can you share a favorite memory of living in Southern California?

Andrew:  I loved seeing the air shows at NAS Miramar when I was a little kid. Being there heightened all my senses, especially sound—the incredible roar as the Blue Angels performed low-altitude flybys. I remember thinking that had to be the coolest job in the world and I’m betting those Navy and Marine pilots agreed with me! The Blue Angels still amaze me today. Seeing them at a young age is what inspired me to pursue becoming a pilot. I have a fixed wing license, but I primarily fly helicopters as a hobby. I just wish it wasn’t so expensive!

Kim:  Looking back at your BS in Architecture, can you apply anything from this technical career to your writing career?

Andrew:  That’s a tough question and I’ve often thought about it. I think it made me pay attention to detail. Architecture is math and physics melded with art. Buildings need to be structurally sound, but they should also be pleasing to the eye. Novels are like buildings in that regard. Although I don’t use architectural skills in my everyday life, it’s a good background to have. It makes me think about structure and creativity working together, not separately. Words, sentences, and paragraphs, are the metaphorical bricks, columns, and sheer-walls of a story and I work really hard to make each word count. On any given book, I spend 75% of my time editing and polishing.

Kim:  Thank you for your continued support of military families! What have you learned about vets while meeting them on your books tours, visiting VA hospitals, etc.?

Andrew:  That’s an easy question. Vets are my heroes. Although I admire their accomplishments, I don’t idolize Hollywood types, professional athletes, or musicians. My heroes are service members who put their lives on the line everyday to protect us. Hey, I know that sounds clichéd but I’ll risk it, because it’s the truth. I sleep well at night because they often don’t.

When I attended the USO Operation Thriller II tour to Afghanistan in 2011 with Clive Cussler, Mark Bowden, Sandra Brown, and Kathy Reichs, I was quite impressed by how professional and sharp our service members looked and acted. They were respectful and dedicated and we never saw an unkempt uniform. We traveled halfway around the world to acknowledge and appreciate them, but everywhere we went, they kept thanking us. It was a tremendously rewarding experience and I’d do it again in a heartbeat.

Many people don’t look at first responders in the same light as veterans, but law enforcement officers and firefighters face potentially life threatening situations every time they respond to calls, especially recently.

To every veteran and first responder reading this: Thank you for your service to America!

Kim:  You were one of a handful of men at the RT Booklovers Convention. Can you share a man's perspective among a sea of female fans?

Andrew:  I’ll have to admit, it can feel a little awkward. I’ve been to the last seven RT conventions, but I’m still getting used to them. Don’t get me wrong, I love the convention. Kathryn Falk and Ken Ruben (RT’s owners) are great people and their friendship is treasured. I’m sure it’s all in my head, but at times I felt like I was being undressed! After all, I was engulfed by a multitude of voracious romance readers. In all seriousness, I’ve never felt threatened because I don’t act like I’m single. I’m joyfully married and I dearly love my wife.

RT is a fun experience and it’s great hear to see so many people dedicated to reading. Romance readers cross genres and read thrillers; the types of novels I write. Over the years, I’ve come to think of RT like a giant family reunion. Every year, I get to catch up with friends and find out what’s new in their lives.

Kim:  Tell us about your Nathan McBride series - what inspired it?

Andrew:  I could write several thousand words on this subject, but I’ll spare your blog readers!

My inspiration can be found in the paragraph above, about vets. I wanted to make a Marine the hero of my stories, but I wasn’t sure what his role or background would be.

At the time I was toying with becoming a novelist, I was heavily involved with the NRA’s high-power rifle competitions and I became a precision target shooter. My friends and I would shoot out to 1,000 yards with match-conditioned M1As and M1 Garands. We didn’t use optics, only iron sights. Often, we’d be shooting in high-wind conditions, so I learned to make exact wind corrections – which I believe is the hardest part of long distance marksmanship.

Creating a fictitious sniper fit the bill for me and I really admired the Marines, especially the recon units. So Nathan McBride was born. I made him an officer, which is quite rare for snipers. Most, if not all of the Corps snipers are enlisted, but I wanted to make him a unique character in more than one dimension. He and his spotter, Harvey Fontana served as scout sniper team in the 1/8 (First Battalion, Eighth Marines – The Beirut Battalion) Nathan lost friends in the Beirut embassy bombing and he swore a personal oath to fight the indiscriminate murderers of Al Qaeda. He approached the CIA and was summarily recruited on the spot. Although he and Harvey loved the Marines, the CIA was a perfect fit for their skill set. Before long, they were conducting covert ops all over the world.

He carries quite a bit of baggage from a botched mission that ended his career. At the termination of the Nicaraguan civil war when he and Harvey served as “advisors” to the Contras, he was captured and brutally interrogated over a three-week period before Harvey was finally able to locate and rescue from the hands of a sadistic madman. Even after twenty years, he still carries emotional and physical scars.

Nathan has issues with trusting people. He’s got a short fuse, and he’s constantly fighting a battle to control his darker nature. Despite all he endured, he’s got a kind heart and sticks up for the little guy. He hates bullies and won’t stand idly by if someone’s being rude or abusive in from of him. If you want to ring Nathan McBride’s bell and see what he’s capable of, kick a dog in front of him. He’ll open a can whoop-ass in a big hurry! 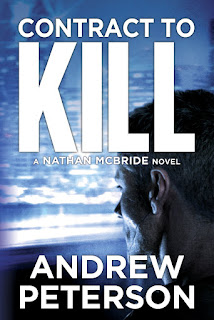 Andrew is gearing up for the release of CONTRACT TO KILL, Book 5, available for preorder now for its August 11 release:

When Toby Haynes witnesses a double murder—and suspects his boss, Tanner Mason, as the perpetrator of the crime—he does the only thing he can think of: he calls in Nathan McBride.

CIA special ops veteran McBride and his partner, Harvey Fontana, respond to their friend’s plea. As they launch a covert investigation into Mason, the security chief for one of the nation’s leading private military contractors, they discover that not everything is as it appears. Mason and his inner circle are leading a top-secret operation to tackle a wave of crime plaguing the US-Mexican border, and the murder may have been part of their complicated strategy—or part of a more menacing agenda. Soon McBride and Fontana find themselves engaged in a deadly game. With a powerful politician behind it all, stopping Mason could mean joining a secret war—with truly global stakes. 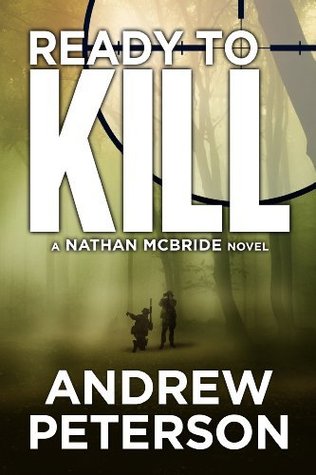 I am giving away a book choice from my convention stash, including Andrew's READY TO KILL, to one randomly selected commenter.  To enter the giveaway,

1.  What do you know about San Diego?  I know it is crawling with Navy SEALs!

Learn more about Andrew and his books at andrewpeterson.com.