Beckett Murda hates to dwell on the past. But his investigation into the ambush that killed half his Special Forces team and ended his Army career gives him little choice. Just when his team learns how powerful their enemies are, hard-ass Beckett encounters his biggest complication yet—a seductive, feisty Katherine Rixey.

A tough, stubborn prosecutor, Kat visits her brothers’ Hard Ink Tattoo shop following a bad break-up—and finds herself staring down the barrel of a stranger’s gun. Beckett is hard-bodied and sexy as hell, but he’s also the most infuriating man ever. Worse, Kat’s brothers are at war with the criminals her office is investigating. When Kat joins the fight, she lands straight in Beckett’s sights . . . and in his arms. Not to mention their enemies’ crosshairs.

Now Beckett and Kat must set aside their differences to work together, because the only thing sweeter than justice is finding love and never letting go.

Hard to Let Go on Goodreads

And don’t miss the other Hard Ink books, now available: 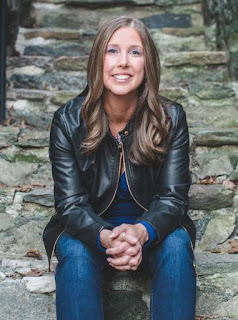 Laura is the New York Times and USA Today bestselling author of over twenty books in contemporary and paranormal romance and romantic suspense. Growing up, Laura’s large extended family believed in the supernatural, and family lore involving angels, ghosts, and evil-eye curses cemented in Laura a life-long fascination with storytelling and all things paranormal. She lives in Maryland with her husband, two daughters, and cute-but-bad dog, and appreciates her view of the Chesapeake Bay every day. 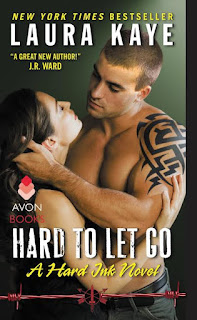 Laura is hosting a giveaway at this link ... and offers an excerpt from HARD TO LET GO:

Beckett was a wrung-out mess. He’d just spent the past hour talking to Emilie, and it was maybe more than he’d talked at one time in his whole life. He couldn’t exactly say he felt good, and maybe not even better, but he could say that he was a little proud of himself for facing his past. Didn’t matter that dealing with that shit was as comfortable as swallowing crushed glass, because choking it down was the only way he’d have a chance at a future.

At least, a future that he really, truly wanted.

Jogging down the stairs from the third-floor apartment, Beckett headed to the gym. No matter how trashed he felt, he had one more conversation that absolutely had to happen tonight.

With Nick. About Kat.

Beckett had seen the all-knowing looks on Marz’s and Jeremy’s faces when he and Kat joined the all-hands’ meeting earlier in the evening. If he didn’t go to Nick soon, the guy was going to learn about them some other way. And then the hell was going to be even worse to pay. And Beckett didn’t want that to happen. Not just because he didn’t want the hassle. But because he owed it to Nick—as his friend and his brother—to come clean.

Didn’t mean that his gut wasn’t all twisted up about whether Nick would think him good enough for his baby sister, though.

He reached the gym door, took a deep breath, and punched in the pass code. Man up, Murda. Right.

Inside, things were hopping, despite the fact that it was pushing eleven o’clock. Some Ravens were lifting weights. Others were shooting the shit around the table. And two guys were tossing a ball back and forth, driving Eileen crazy by bouncing it over her head. Easy was pounding out a fast pace on the treadmill. And, in the back corner, Nick, Marz, and Shane were poring over something on Marz’s desk.

Beckett had faced down terrorists who wanted nothing more than to take his life with their very hands, and he’d probably never been as nervous as he was right now. For fuck’s sake.

He moved into the room. About midway across he spied Cy peeking out from behind a weight machine. “You and me are gonna have a talk soon, too,” he said, pointing at the cat. A one-eyed blink was his only answer.

And then he was standing on the far side of Marz’s desk next to Shane, peering down at what the three men were examining.

Marz gave him a smile and tapped his finger against the pages. “Just going over all these instances when Merritt noted Kaine as having changed orders regarding counter narcotics missions.”

“Marz was right,” Nick said, looking up at him. “Some of these gave me a bad feeling in my gut at the time, because they seemed out of character for Merritt. He was never a last minute kinda guy. Every damn time he’s marked those changes as having been ordered by Kaine.”

Beckett nodded. And then his mouth acted without his brain’s permission. “I’d like to date your sister.”