Aloha to Kim Amos and AND THEN HE KISSED ME

I am posting pictures from my recent trip to NYC for the RWA Annual Conference on my travel blog at this link.  During the conference, I met today's guest - Kim Amos!  From her bio,

Kim Amos is a romance writer whose stories usually have hot dish in them, which is the Minnesota name for a casserole. She also writes young-adult novels under the name Lara Zielin.  Currently, she lives in Michigan with her husband, two dogs, and a cat.

SOS Aloha:  What is your favorite sight, sound, and smell of Michigan?

Kim Amos:  There is a t-shirt that I love, which says “Four out of five Great Lakes prefer Michigan.” It cracks me up every time. I never get tired of seeing, hearing, and smelling the Great Lakes, and I love how different they all are. Lake Superior, for example, is crazy scary and cold. It’s so deep! I imagine huge monsters living in its depths. And then there’s Lake Michigan, which is the color of a robin’s egg in places, so beautifully blue it hurts to look at. Lake Erie is a survivor—it had toxic chemicals dumped into it for years, but it’s making a remarkable ecological recovery. And on Huron, I’ve seen the fog settle in like a blanket, so thick and soft-looking you’d swear you could sit on it. I’m lucky to live near all this fresh water. The Great Lakes are a treasure—and an inspiration—I never tire of!

SOS Aloha:  Who or what helped you along the path to publishing?

Kim Amos:  Does everyone say their agent? Because I’m about to follow suit. My agent, Susanna Einstein, read an early draft of one of my novels and instead of just sending me a rejection letter, she actually agreed to meet with me over lunch and tell me what could be improved in the manuscript. This is so unusual—I still can’t believe she did it. What’s more, her notes were crystal clear, and I felt like I understood what she was looking for. I went home, revised the manuscript over many weeks, then asked her if she’d take another look. She graciously agreed, then signed me after that. I think about that act of generosity all the time, and how it changed the course of my writing life forever.

SOS Aloha:  What inspired AND THEN HE KISSED ME?

Kim Amos:  One of the biggest inspirations is the Empire, Michigan, Asparagus Festival, which takes place the third week in May every year. I just knew I had to use this quirky, unusual event in northern Michigan as a backdrop. Not only does the festival have a parade featuring an asparagus queen, they also have a specialty asparagus beer that you can only get that time of year. There are dozens of vendors that serve everything from asparagus pizza to asparagus focaccia to asparagus sausage. And there’s a “kick your ass-paragus 5k” that I actually ran this year (that it did, in fact, kick my ass-paragus). I tried to fold in many of the festival’s details into AND THEN HE KISSED ME, which was great fun. 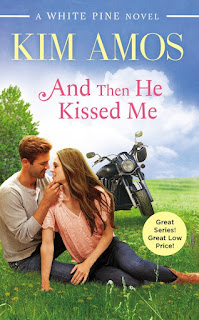 Kim is celebrating the release of AND THEN HE KISSED ME, Book Two in the White Pine series:

Five years ago, Audrey Tanner flung caution to the wind and herself into the arms of an emerald-eyed bad boy biker she met at the White Pine Asparagus Festival. Two blissful weeks together convinced her that Kieran Callaghan was The One-until The One blew town without a word, leaving her brokenhearted. Now, starting a new job at the new Harley Davidson showroom, Audrey is floored to meet her new boss: Kieran. He's still hot as hell, but she won't fall for his sexy smile again. This time, she's calling the shots.

Kieran never thought he'd return to White Pine, Minnesota, much less see Audrey again. Gorgeous and smart as ever, she's just as irresistible as he remembered. She still doesn't know why he had to leave-or that he's missed her every day since. But he can't deny he wants more than the no-strings fling Audrey proposes. As things between them heat up, Kieran must choose between the secret he's sworn to keep and the woman he never stopped loving.

Forever Romance is hosting a special giveaway at this link.

Labels: A White Pine Novel, AND THEN HE KISSED ME, contemporary romance, Kim Amos