Aloha to Marilyn Pappano and A PROMISE OF FOREVER - Book Review 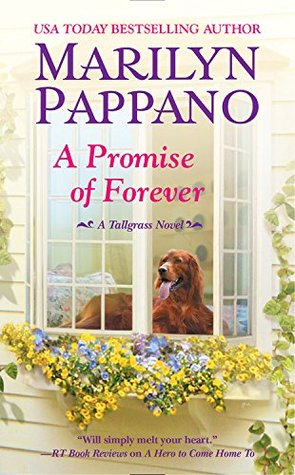 Sergeant First Class Avi Grant's return to Tallgrass, Oklahoma is a long-deferred wish come true. With her final tour in Afghanistan over, Avi can focus on her future-a job here at home and a family of her own. There's just one thing she has to do first: visit her beloved commanding officer's widow and share her grief. The last thing she expected was to feel an instant attraction to the woman's son. Too bad the sexy surgeon is impossible to ignore . . . and even harder to resist.

The sting of his parents' divorce still niggles at Ben Noble. So when a warm, funny, and beautiful young sergeant arrives, mourning his stepfather's loss as strongly as his mother does, Ben can't help but feel conflicted. If his parents taught him anything, it's that love doesn't last-especially with a career soldier. But try as he might to keep his distance, Ben begins to see that Avi-and the spark she brings to his life-is the stuff forever is made of. As Avi's leave ticks away, can Ben convince her to take a chance on forever with him?

A PROMISE OF FOREVER is Book 4 in the Tallgrass, Oklahoma, series.  Tallgrass is home to the fictional Fort Murphy where a group of Army widows have formed the Tuesday Night Margarita Club to find solace among their own. Sergeant First Class Avery (Avi) Grants arrives in Tallgrass to visit the widow of her commanding officer who died during her recent deployment to Afghanistan.  She does not expect to meet, let alone find herself attracted to, the widow's estranged son.

Ben Noble holds onto his resentment towards his mother, who left her husband, his sisters, and him to marry an Army officer. He reluctantly leaves his lucrative surgery (and bachelor life) on the weekends to rebuild a relationship with his widowed mother.   Ben is surprised by his instant attraction to the Army soldier who holds his mother - and the man who broke apart his family - in high esteem.

Pappano delivers a quiet drama of family, romance, and grief.   The title plays upon Ben's feelings towards towards the broken promise of forever as he comes to grips with his mother's abandonment.  In contrast, Avi relishes her parents' long marriage.  She looks forward to finding her own promise of forever once she returns to Fort Gordon, Georgia.  She plans to finish her military service and start a family.  If only she wasn't distracted by Ben who is solidly planted in Oklahoma with his medical practice and his tight knit sisters.

Pappano hits the target by painting a realistic picture of military life - the rewards, the challenges, and the unexpected. I commend Pappano for creating two honorable characters whose careers and families impeded their relationship ... or so it seems.

Pappano also depicts Tallgrass as a comfy small town to delight readers.  She brings out the splendors of Oklahoma in contrast to the recent news of tornadoes and floods.  Pappano makes it a desirable place to live and love.

I have not read the previous novels in the series but felt right at home in A PROMISE OF FOREVER.

I received an ARC from Forever Romance for my honest review.

1.  Leave a comment about Oklahoma - what do you know about it?  I grew up in Miami and often attended the Orange Ball Parade.  I remember the Oklahoma University Sooner band marching proudly in the parade.

Learn more about Marilyn and her books at marilynpappano.net.

Check out my interview with Marilyn at this link.