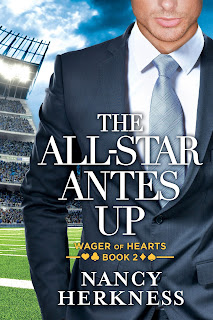 “No strings, no rings.” That’s Luke Archer’s motto. As the champion quarterback for the New York Empire—not to mention a self-made billionaire—Luke has given up on serious relationships. Women only want him for one thing: the thrill of being with a superstar. And he likes it that way too. But when his best friend announces he’s retiring from football to spend time with his wife and kids, Luke feels like he’s missing out on something much bigger than his career.


The assistant concierge in Luke’s luxury high-rise, Miranda Tate fled her family’s dairy farm to come to the bright lights of New York City. She works hard to move up and sends her spare earnings home to her brother. When she and Luke meet, there’s an instant sexual attraction which turns steamy quickly, but they’re in completely different leagues. Could Miranda be just the woman Luke needs to win the most important game of his life? 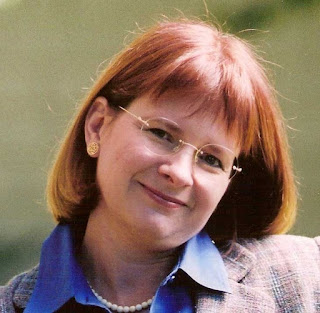 Nancy Herkness is the author of the award-winning Whisper Horse series, as well as several other contemporary romance novels. She has received many honors for her work, including the Book Buyers Best Award, the Maggie Award in Contemporary Romance, and the National Excellence in Romance Fiction Award, and she is a two-time nominee for the Romance Writers of America’s RITA award. She graduated from Princeton University with a degree in English literature and creative writing. A native of West Virginia, Nancy now lives in a Victorian house twelve miles west of the Lincoln Tunnel in New Jersey with her husband, two mismatched dogs, and an elderly cat. Nancy is hosting a special giveaway at this link ... and offers an exclusive excerpt from THE ALL-STAR ANTES UP ...

The car glided to a stop, and he released her hand. The driver’s voice came through the speaker. “We’re at the entrance, Ms. Tate.”

Luke slid his sunglasses back into place.

“You shouldn’t need those,” Miranda said. “I arranged for us to come in a back entrance. I figured that would lessen the chance that a photographer would spot you going in.”

“Thanks,” he said, but his voice held a tinge of disappointment.

“Would you rather go in the front? We can.”

He shook his head. “You’re right.”

The driver opened the door and stood waiting. Luke shifted his legs out of Miranda’s way and offered his hand for support.

She kept her hands on her tote bag as she scooted sideways on the seat. “I’m not going to aggravate your injuries.”

“You’ll aggravate me more if you don’t take my hand.”

She gave in and laid her hand in his, savoring the way his long fingers wrapped around hers. But she kept her weight balanced away from him, stooping to back out of the door so he didn’t have to twist in his seat.

A cloud of annoyance scudded across his face, the mirrored Ray-Bans adding to the formidable effect. “That’s called a pass fake,” he said when she tugged her hand away.

As soon as she stood up, he swung his legs out, planted his worn tan cowboy boots on the pavement, and unfolded his body with a grunt.

“When it’s you doing the leaning, it feels good.” His drawl was like molasses, slow-moving and scrumptious.

“Do you always flirt with your friends?” she asked, struggling against the slide of his seduction.

Miranda didn’t buy that. He was accustomed to stunningly beautiful. “Well, let’s keep this on a friends-only basis.” Otherwise she would fall completely under his spell.

He covered his gleaming hair with the Yankees cap again. “We’ll see how it goes.”

She choked on thin air as his implication sank in. Her body wanted it to go one place, while her brain knew it had to stay in another. But she’d handled flirtations from clients before. It shouldn’t make her feel this flustered.

Marching briskly to an unmarked door, she punched in the temporary security code she’d been given by the museum’s PR director. Luke reached around her to pull the door open, so the sleeve of his jacket brushed her shoulder, and his big body angled close to her. If she leaned a little to the right, she would come up against his muscular chest.

She practically ran through the door.

Luke followed her into an empty, utilitarian corridor and looked around. “How’d you get access to this?”

“Oh, I’ve arranged enough VIP tours of the museum that the PR director trusts me.” In addition, she might have hinted that Luke would make a donation if he enjoyed his visit to the Met, as some of her other clients had.

She pulled up the map she’d been e-mailed and started in the direction that would lead them to the Temple of Dendur. He strode along beside her, his boots thudding on the commercial-grade carpeting. She tried hard not to notice the subtle creak of his leather jacket, or the way the worn denim of his jeans outlined his thigh muscles.

They passed through a catering kitchen used to serve the parties that took place in the venue and emerged on the stone platform beside the ancient Egyptian temple. She felt bad that Luke couldn’t approach it from the front to get the full effect of the dramatic setting, but this offered less risk of him being recognized and bothered.

Still, the huge exhibition space with its vast ceiling and curtain wall of glass made a strong impact. Luke stopped and whistled softly as he took in his surroundings.

“The big pool of water surrounding the temple is supposed to represent the Nile River,” Miranda said, drawing on the research she’d done. “The decorative carvings on the base of the temple are stylized papyrus and lotus plants.”

Luke started walking toward the front of the temple.

“It was built in 10 BC under the rule of Caesar Augustus,” Miranda continued. As they came around to face the entrance with its two tall columns, she said, “The winged disk is—”

“The symbol of the sky god Horus,” Luke finished for her. He gave her a slanted smile. “As a kid, I got interested in the Egyptians. Some of it stuck.”

“And you let me babble on about it. A friend would tell me to shut up.” Miranda worried that she had sounded patronizing with her mini lecture.

He sauntered into the first room of the temple, his gaze skimming the carvings of pharaohs making offerings to the gods Isis and Osiris. “I don’t know anything about this temple. I just recognize some of the symbols. Like that one means pharaoh.”

“Which is more than I knew.”

He shoved his hands into his jeans pockets and looked down at her with a gleam in his eye. “Well, the truth is, I like to listen to your voice.”

“It’s all smooth and soothing. It just kind of washes over you.”

There he went, nudging things past the friendship line. She didn’t know whether to flirt back or try to keep things on a client-concierge basis. It would be easier if the molecules of her body didn’t do a jig every time he smiled at her. “You mean my voice puts you to sleep.”

He shook his head. “No, it makes you want to sort of bathe in it, like a hot shower.”

A totally inappropriate picture of Luke standing naked under a showerhead sprang into her mind. He would rival any of the perfectly muscled statues in the European sculpture gallery. Heat cascaded through her, and she thrust the thought away. Better to keep the flirting to a minimum before she did something she regretted. “Thank you. I think.”

She turned away to drag her mind off her fantasy of Luke’s nude body and noticed that a couple of people were casting speculative looks at him and whispering to each other. He was either oblivious or ignoring them, because he continued to examine the bas-relief carvings on the temple walls.

“We’d better get moving,” she said under her breath. “I think some adoring fans have spotted you.”

Resignation cast a cloud over his face. He nodded and walked out of the temple. “Keep walking,” he said, taking her elbow to propel her forward. She forced her attention away from the delicious power of his touch. “It’s when you stand still that they get up the nerve to pounce.”

“I want you to see it from the front, though,” she said, veering toward the huge reflecting pool.

He let her guide him to a vantage point that showed the entire vista of seated statues on the edge of the pool, the temple’s entrance gate, and the temple itself. She loved the stark majesty of it.

“You’re right. It’s worth the risk of getting ambushed by autograph hounds,” he said. His face was alight with the kind of wonder she’d hoped to evoke. She let him stand there, drinking it in, as she kept an eye out for fans. The people who’d been staring at him in the temple were coming closer, so she tugged him gently in the opposite direction.

“We’re going to duck into another side door and head for the Astor Chinese Garden Court,” she said. “That ought to shake them off.”

She got him through the door and into the staff elevator. “How did they notice you so fast?”

He shrugged with that gleam in his eye. “My charisma.”

She took a step away from him and tilted her head. He had his shoulder propped against the elevator wall, and one booted ankle crossed over the other. He had more than charisma. He made her want to run her hands over every inch of his body. “I guess there is something there,” she said, letting herself respond in kind this once.

The elevator slowed, and he pushed off the wall to look down at her. “Too bad the elevator ride wasn’t longer.”

The pale blue of his eyes no longer looked like a glacier. Now they burned with the scorching flame of an acetylene torch as it sliced through metal. Miranda felt the sear right down to her bones. Their flirting had taken on an unexpected edge that made her nervous. Because despite the city-girl facade she’d built for herself, she didn’t have much experience with city men. She just didn’t have the time. And she had a feeling that her romantic encounters with community college boys hadn’t come close to preparing her for someone like Luke Archer.

As the door slid open, she held up her hand like a stop signal, hoping he didn’t notice its slight waver as her blood pulsed hard in her veins. “Flirting again.”

He laid his big, square palm against the doorjamb to hold it open for her. Miranda sidled past him and pulled in a shaky breath before she resumed her tour guide duties. “The Chinese Garden Court is modeled on a seventeenth-century courtyard and features Ming dynasty wooden furn—”

He took her wrist and pulled her to a stop in the hallway. “You’re ignoring me.”

“That would be impossible,” she said.

“Okay, you’re ignoring what I said.” His thumb was stroking across the fragile skin on the inside of her wrist, which sent shivers of sensation dancing up her arm.

She could barely think straight, so she blurted out an honest answer. “I don’t understand what you’re doing. I’m supposed to be your tour guide and your temporary friend. I’m not your . . . your date.” 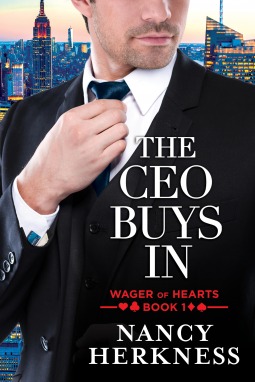