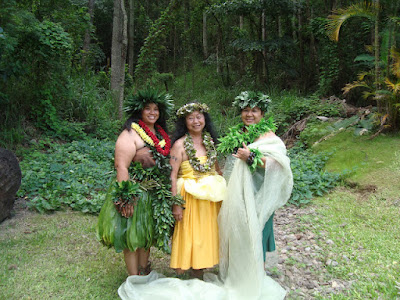 Today is the 100th anniversary of the King Kamehameha Day Floral Parade.  From Hawaii.com (link),

In a traditional display of colors, each island float ... will be clad in its official hue. Look for a rainbow of color proceeding down Waikīkī’s famous Kalākaua Avenue. Niʻihau, the Forbidden Island, is white. Kauaʻi, the Garden Isle, is purple. Oʻahu, the Gathering Place, is yellow. Molokaʻi, the Friendly Isle, is green. Maui, the Valley Isle, is pink. Kahoʻolawe, the Target Island, is grey. Lānaʻi, the Pineapple Isle, is orange. And Hawaiʻi Island is red. 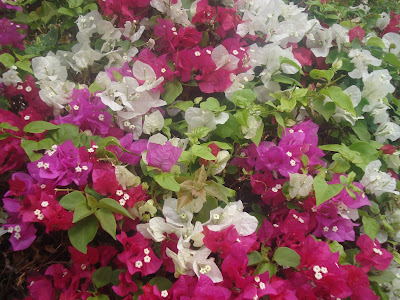 Celebrations on the other islands are listed here.  King Kamehameha Day celebrates the legacy of the warrior who united the eight islands into one kingdom. In honor of King Kamehameha, I offer eight illuminating facts which demonstrate why he is called Kamehameha the Great:

2. Kamehameha lifted the sacred Naha stone, fulfilling a prophesy that the one who could lift it would rule over the Hawaiian Islands.  Learn more about the legend of the Naha stone at this link.

3. Kamehameha built the Puʻukoholā Heiau.  Today, it is a National Historic (link),

Kapoukahi, a powerful kahuna from Kauaii, prophesized that war would end if Kamehameha constructed a heiau dedicated to the war god Ku at Pu'ukohola. In 1791, Keoua, Kamehameha’s cousin, was slain at Pu'ukohola, an event that according to prophesy, led to the conquest and consolidation of the islands under the rule of Kamehameha I.

4. After gaining control of the island of Hawai'i, Kamehameha defeated the ali'i on Maui, Moloka'i, and Lanai.  He landed on Oahu and pushed the defending army through the Nu'uanu Valley and over the pali (cliff). 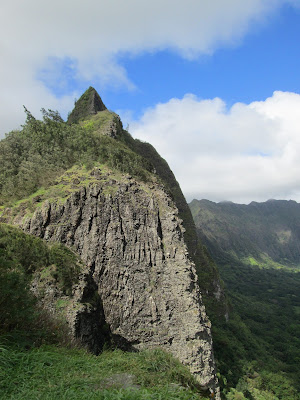 5. Kamehameha attempted to invade Kauai twice, but the weather prevented his armada from paddling from Oahu. Still, the king of Kauai became a vassal of Kamehameha to avoid further attempts and bloodshed.  In the end, Kamehameha united the eight islands.

6. Kamehameha "retired" to Kamakahonu - his personal compound with a heiau (temple) on his home island of Hawai'i. Nearby is the start and finish of the Ironman World Championship Triathlon. 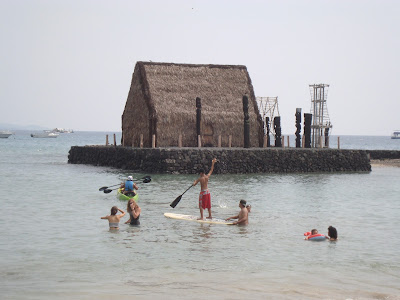 7. The next four kings were named King Kamehameha II, III, IV, and V.  His descendant, Bernice Pauahi Bishop, left her estate in trust to create the Kamehameha Schools for Hawaiian children.

8. For all his "fierceness", Kamehameha's first law protected the weak:

Let the old men, the old women,
and the children go and sleep on the wayside;
let them not be molested. 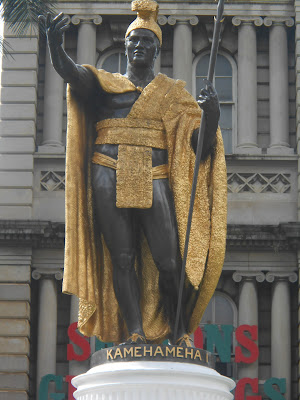 King Kamehameha's statue stands outside Aliʻiolani Hale, home of the Hawaii State Supreme Court. His statue appears in the opening shots of the original Hawaii Five O and its reboot. Kamehameha will be draped in lei today!

1. Leave a comment about your favorite flower.  Mine is the Bird of Paradise. 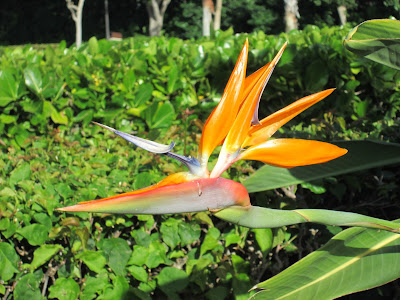