I met Pamela Clare at RomCon last July - I invite you to read the recap.  We swapped emails several times and Pamela sent me an ARC of her upcoming book, BREAKING POINT.   I had a choice - find a reviewer for it or review it myself.  Normally I would find a reviewer as I infrequently review books.  I am a slow reader, I struggle to quantify my feelings, and romantic suspense in not my favorite genre (hits too close to home).  But I took the plunge and read this book - here is the review I posted on Goodreads.

I generally shy away from romantic suspense and roller coasters – just too much excitement for this mild mannered romance reader. Yet the buzz generated from Ms. Clare’s previous books propelled me to read BREAKING POINT – the fifth book in the I-Team Series. Like a roller coaster, the plot unfolds in two parts – the first (shorter) loop of chilling suspense followed by the second (longer) loop of thrilling action that left me breathless and satisfied.

Zach is a decorated Navy Seal turned Deputy US Marshall (DUSM). While working undercover, he is betrayed by an ally, taken prisoner by a Mexican drug cartel, and waiting to die from torture. Enter Natalie, an investigative reporter who has also been taken prisoner during a bloody ambush. The two meet through the walls of their hellhole prison. Ms. Clare touches upon issues that will resonate with military veterans, law enforcement, and first responders – the Code of Conduct and Service before Self.

Zack provides Natalie with the emotional support to escape and she provides him with the physical assistance to join her. They take refuge in Alter to plan their trek across the Mexican desert to the US border. At this point, I am anxious for them. They just pulled off “the great escape” yet they are far from safe as they eat, sleep, and touch. Yes, touch.

He sensed her behind him, felt her hand read against the nape of his neck, her cool fingers caressing his hair in soothing strokes. A part of him wanted to shout at her to get the hell away from him. He didn’t want her compassion. He didn’t need her compassion.

In the short time that our hero and heroine have spent together, they realize that the other is a lifeline – not just out of their physical hellhole but the emotional turmoil that has plagued them far too long. The emotional connection leads to physical interaction that re-energizes their sense of survival. Although this plot could lapse into a cliché, Ms. Clare makes it very real for the protagonists by allowing them (and the reader) to experience the full spectrum of emotions – emotions heightened by their brush with death.

As Zack and Natalie trek across the desert, I grew uncomfortable. I felt the weight of their packs on my back, the unstable sand under my feet, the blaring sun on my face, the fear pulsating through my heart, and the thirst creeping through my body. Ms. Clare is not just telling a story, she is placing the reader in the middle of it.

Once they cross the US border, Natalie returns with the I-Team to Denver and Zach reports back to Washington, DC. No sooner do they give me a chance to catch my breath, the roller coaster climbs to the top. The suspense begins to build. An enemy within emerges from the shadows to threaten Natalie. This time, hero and heroine switch roles - Zach provides Natalie with the physical stamina to survive. She provides him with the emotional strength to break through his demons. They are joined by the I-Team and their husbands in law enforcement. To balance the testosterone, Ms. Clare introduces us to Colorado Marshall Teresa Rowan who deputizes these "alpha" men:

“You know (Deputy Marshall Michelle) Reyes, the thing you have to remember when working with men is that they’re very emotional. For example, those guys are on the same side, trying to protect the same woman, but they have to fight about it like dogs trying to decide who’s the alpha.”

“But guess what, gentlemen – I’m the alpha.”

The deputized team encounters its own twists and turns in protecting Natalie, especially during the climactic loop. In fact, Ms. Clare takes the reader through a series of poignant scenes:

- the gravity defying appearance of a team member
- an unexpected opportunity for one alpha to comfort another
- Zach resolves a long standing issue on the canyon ridge.

(I would write more about these scenes but I don't want to spoil the emotions that you will feel as these scenes unfold).

This second (longer) loop was heart pounding and heart wrenching as hero and heroine wrestled with real monsters and inner demons. Ms. Clare gives us a realistic portrayal of The Happily Ever After – it is not a gentle Dumbo ride. Instead, it is the dark unknown of Space Mountain that challenged both the protagonists’ belief in their abilities and their trust in others.

I don’t know what Ms. Clare has planned next but I sure would like to see Colorado Marshal Teresa Rowan take a few loops around the roller coaster of romantic suspense!

I read BREAKING POINT as standalone book. I look forward to reading the preceding four books to learn more about the I-Team. Thus, Ms. Clare has converted me to romantic suspense (roller coasters are still under consideration). 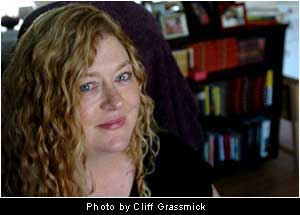 Check out my interview with Pamela plus a special giveaway.