Aloha to Paula Quinn and THE TAMING OF MALCOLM GRANT

THE TAMING OF MALCOLM GRANT, Book Four in The MacGregors:  Highland Heirs series

Emmaline Grey spends her days with her beloved dog, dreaming of the sea-until a brawling Highlander shatters her quiet life to pieces. Though her blindness prevents her from seeing his face, his voice is a warm blend of velvet and silk, and his rakehell ways unmistakable. Risking the wrath of a rival clan as she nurses him back to health, Emma soon realizes the real danger is the magnetic pull she feels to this half-naked Scot recovering in her bed.

With his rugged handsomeness and wicked charm, Malcolm Grant wants nothing more out of life than whisky, women, and the occasional war. The only lass he's ever trusted left him with more scars than a battlefield. Yet now at the mercy of this sweet stranger, Malcolm can barely resist the gentle hands that make him feverish with desire-until Emma, the one he will never have, is the only woman he wants.
Amazon
B&N
iTunes
Kobo 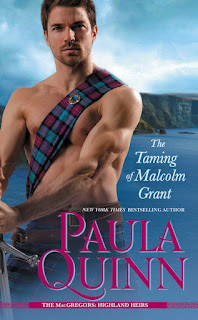 Forever Romance offers an excerpt from THE TAMING OF MALCOLM GRANT ...

He laughed softly and then groaned. “I know what ye’ve heard . . .” He paused, rethinking his defense, and then apparently thinking better of it. “I earned m’ reputation. Besides, I canna’ go back and change m’ past.”

She hadn’t asked him to. The idea of him going back and changing his past had never even crossed her mind. Had it crossed his? And why? Why would he care about what she thought of him? Malcolm Grant didn’t trouble himself with those things.

“Would you?” she asked him now that he brought it to her attention. “Would you go back?”

She waited on bated breath for his answer, letting only one thing distract her from his reply.

His kiss. His passionate mouth taking hers over and over. Oh, if he would only do it again she would welcome his tongue.

Or should she have slapped him?

His answer came but it offered her no comfort. She tried not to look disappointed.

“Mayhap who I was in the past,” he continued, “has shaped me into who I’m supposed to be.”

“You’re supposed to be a heartless rake?” she asked.

It angered her that he believed it and she didn’t bother to hide her fierce scowl.

“Something more than that, mayhap.”

The stillness of his voice shook her to her bones. He wasn’t smiling or being glib now.

The sudden touch of his fingertips on her face startled her. When he traced the pad of his thumb along the seam of her frown, she battled herself to keep from going soft all over him. What was he doing? Why had he said what he did? Why was he touching her so intimately—the way she would touch him to know how he looked?

Was this what it was like to be enchanted? She felt mesmerized, paralyzed, giddy with delight. This was Malcolm slaying her heart, being the charming rake he was rumored to be. He’d said Harry was correct about him, but she didn’t care. Not in this moment. Whatever spell he was weaving on her, she allowed it. Helpless to do anything else.

But she did do something else. She lifted her hands to his face.