Just as I was signing up for this blog tour, Science Daily announced:

Summary:Thousands of Vikings established a camp in Lincolnshire as they prepared to conquer ninth century England, archaeologists have discovered. Vikings used camp in winter to repair ships, melt down stolen loot, trade and play games.
I cheer for the discovery of our past!  For more information, check out Science Daily at this link. Thus, it is a scientific value to consider Vikings in the Highlands ...

Calder MacGerry, laird of an impoverished clan, has resolved to end the bitter feud between the MacGerry and Sinclairs. He jumps at Laird Sinclair’s offer of marriage to his only daughter, Katja, to seal the agreement between their clans—only to get more than he bargained for.

Katja’s chance to escape her father’s harsh treatment appears to be too good to be true. But becoming Lady of a clan that despises her because she’s a Sinclair, doesn’t make life any easier. When the attacks turn deadly, she fights her way out, making a dangerous passage to the Shetland Isles for refuge with her Viking family.

Calder and Katja’s marriage, built on mistrust, rushes quickly into disaster. As Calder seeks to repair the damage, Katja discovers not another enemy, but a husband who pledges a new beginning. 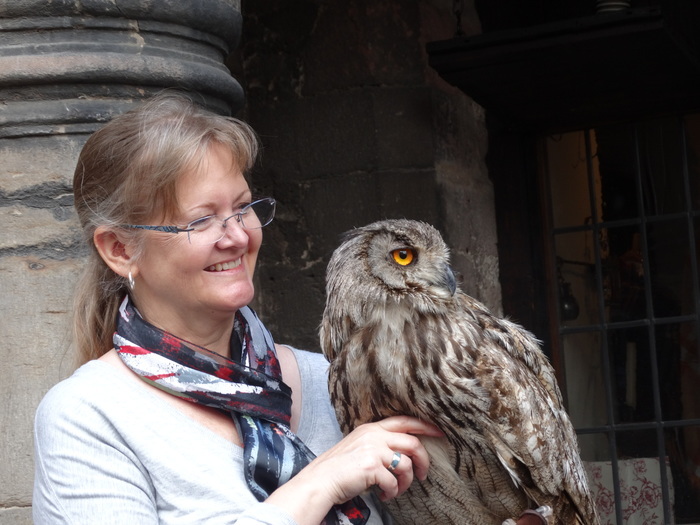 Cathy MacRae lives on the sunny side of the Arbuckle Mountains where she and her husband read, write, and tend the garden—with the help of the dogs, of course.

You can visit with her on facebook, or read her blogs and learn about her books at cathymacraeauthor.com. Drop her a line—she loves to hear from readers!

DD MacRae enjoys bringing history to life and considers research one of the best things about writing a story! With more than 35 years of martial arts training, DD also brings breath-taking action to the tales.

You can connect with DD through cathymacraeauthor.com. It’s always exciting to hear from readers!

Cathy and DD offer an excerpt from THE HIGHLANDER'S VIKING BRIDE ....

Katja reluctantly heeded her father’s summons to the great hall. She much preferred taking meals in her chamber, as constant criticism and scorn from her father made for poor company. Her only regret was not spending the time with her brothers. She remembered the days before her amma died when mealtimes were pleasant, even enjoyable. She did not remember the days when her ma was alive.

Everyone in the keep knew guests had arrived—rumored to be the hated MacGerrys. Her father would likely use the opportunity to dangle her as bait again for some sort of alliance, her hand in marriage as part of the bargain. She grimaced. The MacGerry laird was as old as her sire—as were all the men her da had presented as prospective husbands.

“I willnae marry a man thrice my age. Why does he keep bringing such old relics about, Freki? Has the man not made the acquaintance of anyone younger than two score?”

Her companion did not answer.

Katja hurried to the great hall with Freki at her side. If she allowed her sire to wait too long, he would add to her humiliation by displaying her like a freshly caught trout in front of his guests. Much as she disliked appeasing him, flaunting her disdain was far worse.

When they reached the door to the hall, she raised a hand, whispering a command for her companion to wait outside the door as she perused the people seated in the great hall. Pale auras of color surrounded each man, giving the room a festive look were it not for the unsettling tale each told her. The reds of anger and lust, the brown of dishonesty, gray and sulphur of dark thoughts and pain. From long practice, she ignored the pale green of pity she knew were aimed at her.

Skirting the red auras, Katja moved silently into the room, attracting no attention. Years of avoiding her father gave her the skill to move about the castle like a ghost, finding tremendous value in being invisible when the need called for it. It wasn’t until she stood near the foot of the lower tables that anyone noticed her. Laird Sinclair’s eyes gleamed.

The sight of a young man instead of the old laird she expected startled Katja. Tall, lean of muscle with dark brown hair and fair skin, his deep blue eyes were the color of sapphires or perhaps the ocean on a calm day. A high forehead, strong jaw and full lips made for a very handsome face. Lips which curved into a kind smile at her.

His eager blue eyes stared at her, as if caught in a pleasant dream. Katja’s stomach twisted in a way she’d not experienced before. Heat scorched its way from her head to her shoulders, tingling along her breasts and descending lower. She didn’t recognize or understand the strange awareness. Her breathing picked up its pace as her heart beat tripled. How could one look from a man inspire such a reaction?

She averted her gaze in an effort to wrestle her body and emotions under control. Inhaling deeply, she raised her eyes again only to find the same sensations slamming into her anew. She needed a distraction.

Use the sight. It doesnae lie.

Looking past her normal ability to see, she glanced first at her father. The darkening gray aura surrounding him reflected his greed, his nature growing more corrupt with time. A band of deep brown layered on top of the gray was new today. She knew it as a sign of deceit and wondered what he was up to. Scanning the rest of the table, the light blue surrounding her brothers Bjorn, Christer and Patrik reflected confusion. Whatever her father contrived with the MacGerry, they knew nothing of it. 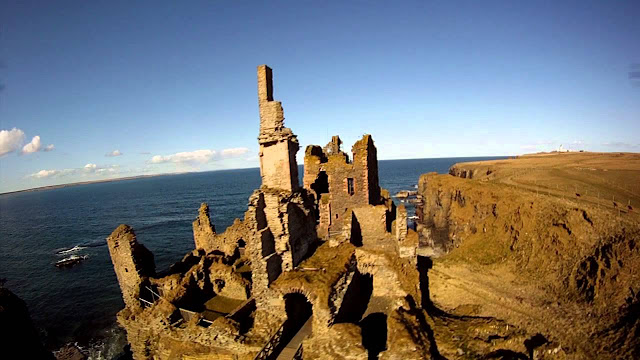 Castle Sinclair Girnigoe via YouTube (link)
Posted by Kim in Baltimore at 12:30 AM