Aloha to Laura Drewry and OFF THE HOOK (Fishing for Trouble) 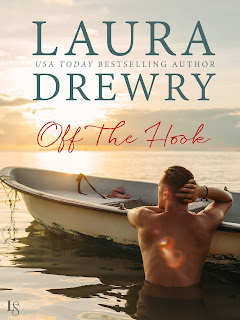 Welcome to The Buoys, a West Coast haven where love comes in with the tide. Perfect for readers of Jill Shalvis and Susan Mallery, the Fishing for Trouble series features three unforgettable brothers—each of whom is a great catch.

Major league pitcher Liam O’Donnell knows his best days are probably behind him, but that doesn’t mean he’s ready to retire and become a fishing guide. Still, after all the time he’s spent chasing his dreams, he owes it to his brothers to pull his weight around the lodge. The Buoys is their father’s legacy, and they can’t let some developer take it from them. The one snag Liam isn’t counting on is a blast from the past: his ex-wife.

The moment Kate Hadley steps out of the seaplane, she knows this assignment is going to be trickier than she thought. She has to persuade the owners to sell—and one of them is Liam O’Donnell. Ten years ago, she made the biggest mistake of her life when she married Liam during a fling in Vegas. Now he’s her only lifeline in the middle of nowhere. Kate’s trying to keep things cool, but Liam just reminds her of the scorching few nights they spent together—and tempts her to make new memories that are just as steamy as the old. 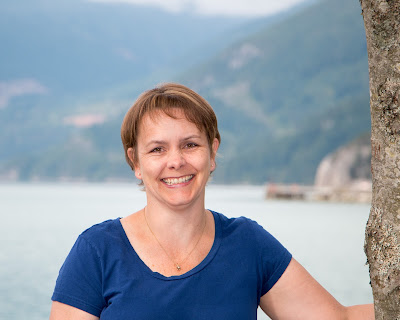 USA Today Bestselling author, Laura Drewry had been scribbling things for years before she decided to seriously sit down and write. After spending eight years in the Canadian north, Laura now lives back home in southwestern British Columbia with her husband, three sons, a turtle named Sheldon, and an extremely energetic German shepherd. She loves old tattered books, good movies, country music, and the New York Yankees.

Laura joins me for a cozy chat ...

Kim: British Columbia! What is your favorite sight, sound, and smell of the Pacific Province?

Laura: Please let me say (and I’m sorry if this offends anyone – LOL) that I truly believe I live in one of the most beautiful places on the planet. I don’t know if I can pick absolute favourites, but some of my favourites are: I love the sight of bears wandering through the bushes near our house, I love the sound of lawn mowers in October, and I love the smell of the ocean.

Kim: Who or what helped you along your path to publishing?

Laura: Honestly, I think every single person I’ve ever met has helped me in one way or another, either directly or indirectly. From my English and writing teachers in school, to the amazing authors I met in different writing groups who are always willing to share their knowledge and experiences with me. I find help and support from my family, especially my sister who reads everything, my husband and kids who put up with a lot so I can do what I love, my agent who’s been with me a long time, and the editors I’ve worked with over the years. The biggest help, of course, are all the readers who, with the simple act of buying and reading a book, helps the writer to write the next one, to improve that much more. It truly is a group effort! J

Kim: What inspired the Fishing for Trouble series and Book One, OFF THE HOOK?

Laura: My husband used to fly in to fishing lodges a couple times a year, so the original idea of setting a series at a lodge started a long time ago, but nothing ever really took. Several years ago, we bought a place up the coast of BC where we go to fish now – it’s certainly not a lodge, just a house in a teeny tiny little town – but it got me thinking again about using a lodge as a setting. I already had the lodge designed in my head and I had the three O’Donnell brothers’ names and a bit of their background, but I didn’t have a story for any one of them.

And then one day I was watching Money Ball for about then twentieth time (LOL) and it suddenly struck me that Liam O’Donnell was a different version of Scott Hetteberg - especially Chris Pratt’s version of him. We were off to the races.

Laura offers an excerpt from OFF THE HOOK ...

They were almost to her cabin when she shocked the hell out of him by slipping her hand under his arm and nudging his shoulder with hers.

“You’re still a hotshot pitcher, you know. Don’t talk about that in the past tense.”

Liam blinked hard, then leaned in and pressed a slow kiss against her cheek. Half an inch, that’s how close he was to those soft, warm lips he remembered all too well, but no matter how much he ached to taste them again, he forced himself to pull back and smile down at her.

Besides his agent—who didn’t count, because Liam paid him to say it—Kate was the first and only one to even suggest he might have something left, and if she’d said it any other time or any other way, he might not have believed she was sincere.

But looking at her now, with her foot up on the porch, ready to go inside, there wasn’t the slightest trace of doubt in her eyes, just those damn bits of amber flickering like little beacons.

“I, uh . . .” Blowing out a hard breath, Liam shoved both hands through his hair, locked his fingers together, and took a step back. “I better go. It’d really screw things up here if we woke up married tomorrow.”

“Right. Good thinking,” she said, her mouth curling into a slow, knowing smile. “’Cause I promise you this, I won’t be nearly as nice the next time you divorce me.”