RWA in San Diego - Driving Tour of Navy Base Coronado

I previously posted that I will be attending the Romance Writers' America (RWA) Annual Conference in 2016 (link). I was invited by two friends to participate in a special driving tour of Navy Base Coronado on Wednesday, July 13, from 10 am - 2 pm:

Join Navy veteran Cathy Maxwell, Navy spouse Anne Elizabeth, and Air Force veteran Kim Lowe for a driving tour of Navy Base Coronado. We’ll drive by historic sights such as “Camp Trouble,” where Naval aviation was born. We’ll walk in the footsteps of the first commander’s wife, Wallis Warfield, who later became the Duchess of Windsor. Today, Navy Base Coronado is a consortium of eight installations providing support for 16 helicopter squadrons, two fixed wing squadrons, two aircraft carriers, four SEAL Teams, and Navy Expeditionary Combat Command squadrons. Our tour will give you a glimpse of military life with a retired Navy SEAL as our narrator. We will make several stops, including Breakers Beach for a group photograph and the Navy Exchange for lunch.

RWA posted the link on Thursday afternoon ... and the tour sold out within an hour.  Who knew romance writers wanted to see steel gray buildings?  Actually, I think it is the retired Navy SEAL narrator who inspired the sellout.

I would like to thank those who made this possible - my cohosts Anne Elizabeth and Cathy Maxwell. I also appreciate the writers connected to the military who are sponsoring the tour - including Heather Ashby and AJ Brower.

For those who are not able to participate in the driving tour ... how about a virtual tour?  Navy Base Coronado occupies the north side of Coronado Island, Spanish for "Crowned One". Indeed, Coronado is the king of aviation history.  From the National Park Service (link),

The Naval Air Station, San Diego, Historic District, located on North Island in California, is associated with broad national and regional themes in the history of military aviation, representing the principle administrative and residential core of one of the earliest naval air stations in the United States, and the first on the West Coast. Climatic conditions, and the characteristics of flat terrain, good beaches and protected stretches of water, attracted the aviation pioneer and Wright Brothers' competitor, Glenn H. Curtiss, to North Island in 1910. Through the intervention of a local flying club, the landowner, the Coronado Beach Company, was persuaded to permit Curtiss to use North Island for his Aviation School.

In December 1910, the Navy assigned its first pilot, Lt. T.G. Ellyson, to be trained by Curtiss at his school on North Island. The Navy established its first naval aviation unit at Annapolis, Maryland, in September 1911. However, because winters in the Northeast precluded flight operations, North Island was chosen for the aviation unit's winter quarters. In 1912 "Camp Trouble," as it was called, was established on the northeast corner of North Island, a site now encompassed by the Naval Air Station, San Diego, Historic District. Consisting of three airplanes, three pilots, three tents and some mechanics, this group stayed until April, then returned east. The Navy would not return to North Island until 1917. 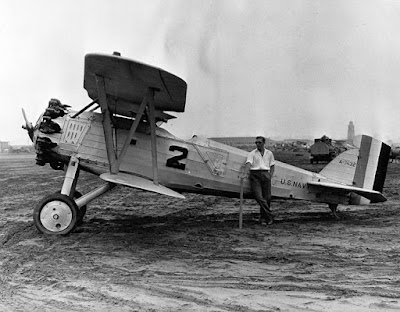 Next week:  The Army Signal Corps comes rolling along to North Island.

1. Leave a comment about "Camp Trouble" - do you have a funny story about camping?  I haven't camped since I was a Girl Scout.  When I accompanied my youngest son on a Webelos campout with the Boy Scouts, I stayed in a cabin (link).

2. Comments are open through Saturday, April 9, 10 pm in Baltimore. 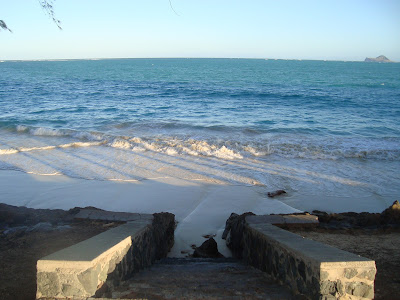 Camping on the beach in Hawaii