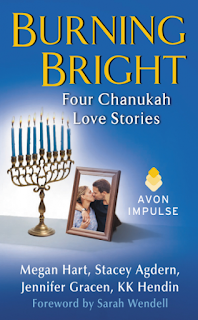 This December, take a break from dreidel spinning, gelt winning, and latke eating to experience the joy of Chanukah. When you fall in love during the Festival of Lights, the world burns a whole lot brighter.

It’s definitely not love at first sight for Amanda and her cute but mysterious new neighbor, Ben. Can a Chanukah miracle show them that getting off on the wrong foot doesn’t mean they can’t walk the same road?

Lawyers in love, Shari Cohen and Evan Sonntag are happy together. But in a moment of doubt, he pushes her away-then soon realizes he made a huge mistake. To win her back, it might take something like a Chanukah miracle.

When impulsive interior designer Molly Baker-Stein barges into Jon Adelman’s apartment and his life intent on planning the best Chanukah party their building has ever seen, neither expects that together, they just might discover a Home for Hannukah.

All Tamar Jacobs expected from her Israel vacation was time to hang out with one of her besties and to act like a tourist, cheesy t-shirt and all, in her two favorite cities. She definitely was not expecting to fall for Avi Levinson, a handsome soldier who’s more than she ever dreamed.

Megan Hart is a New York Times and USA TODAY bestselling author of more than thirty novels, novellas and short stories. Her work has been published in almost every genre, including contemporary women’s fiction, historical romance, paranormal and erotica.

Jennifer Gracen hails from Long Island, New York, where she lives with her two young sons. After spending her youth writing in private and singing in public, she now only sings in her car and has fully embraced her lifelong passion for writing. She loves to write contemporary romance and romantic women’s fiction for readers who yearn for better days, authentic characters, and satisfying endings. When she isn’t taking care of her kids, doing freelance copy editing/proofreading, reading, or talking to friends on Twitter and Facebook, Jennifer writes. She’s shocked her family hasn’t yet staged an intervention for her addiction to social media. But the concerts she gives in her car and the dance parties she has in her kitchen are rumored to be fabulous.

KK Hendin writes books where people flirt awkwardly, make out, dish out a whole lot of sass and ridiculousness, and live happily ever after. She’s the author of many books, including the TWELVE BEATS IN A BAR series and the upcoming UNDERCOVER series. She also writes books as K. Hendin, where people aren’t as nice and Happily Ever After isn’t a guarantee. KK is currently writing way too many books, and is still waiting for the subway to run on a regular schedule. When she’s not playing book Tetris in an attempt to fit everything onto the bookshelves in her tiny NYC apartment, she’s probably wandering her neighborhood with her camera or drinking yet another cup of coffee.

Stacey Agdern is an award winning former bookseller who has reviewed romance novels in multiple formats and given talks about various aspects of the romance genre. She also a romance writer. You can find her on twitter at @nystacey. She’s a proud member of both LIRW and RWA NYC. She lives in New York, not far from her favorite hockey team’s practice facility.

My brother holds a pretty big Chanukah party every year (he calls it Laktepalooza). It’s filled with family and friends, gingerbread houses, music and it’s centerpiece : my brother at the stove frying latkes. I’m not always able to attend, but when I do, it fills my heart with joy, even when it ends up being in March ;)

My family recipe involves applesauce (as a dipping sauce)
-6 potatoes
-3 onions (or one big one )
-2 eggs
-breadcrumbs, matzah meal (or gf alternative) to bind.
-Olive oil

Wash, cut and grate the potatoes (you can use a food processor if you have one ). The goal is thin strips that will crisp up in the oil).

Use a paper towel and get as much water out of the potatoes as possible. Squeeze ;) Then put in a bowl.

Peel and cut the onions, put them in the food processor (or grater). You want them finely chopped. Add them to the potatoes.

Break the eggs into the bowl with the potatoes and the onions. Mix.

Add the breadcrumbs or your substitute into the bowl, just enough to sop up the water that’s being released from the potatoes and the onions.

Oil in the pan; make sure the oil is on the hotter side. Test the oil with a small piece of the potato. When it sizzles, you know it’s ready.

A tablespoon of batter is usually enough.

When the oil sizzles through the latke, it’s time to turn it over. As long as the latkes are crispy on both sides, you’re good.