Aloha to Jeanette Murray and BELOW THE BELT 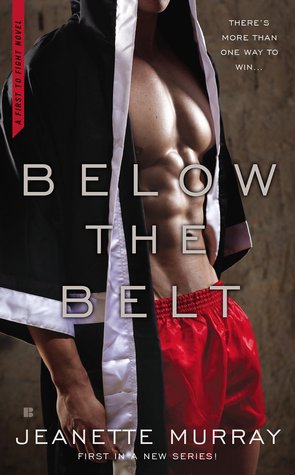 Athletic trainer Marianne Cook is ready to do whatever it takes to turn the men of the Marine Corps boxing team into fighting machines. After all, her ultimate goal is to land a job training professional athletes. But when she notices a certain hard-bodied marine trying to hide an injury, Marianne realizes that she’ll have to use covert tactics to get him talking.

First Lieutenant Brad Costa has waited years for the chance to fight for a spot on the Marine Corps boxing team, knowing he has to push twice as hard to get half as far as his younger counterparts. Brad tries to downplay his injuries to the attractive trainer who has his dreams in her hands, but Marianne isn’t buying it. Maybe it’s time to deploy some targeted flattery.

As Brad and Marianne’s attraction turns red-hot, there’s more than one person having a hard time keeping their eyes on the prize…

Jeanette lives just outside St. Louis with her husband, daughter and their lovable-but-stupid Goldendoodle. When she's not writing her next romance, she's found hanging out with the new friends she's made here, catching up with old friends from past duty stations on Facebook, or surfing Pinterest pretending she can cook. Catch up with her on Facebook or Twitter for contests, sneak peeks of what she's working on, and updates about her life in general.

I am giving away a print copy of BELOW THE BELT to one randomly selected commenter.  To enter the giveaway,

1.  Leave a comment about Marines ... do you have a favorite movie and/or TV show that features Marines?   I recently enjoyed A FEW GOOD MEN on Cable ... excellent cast with Tom Cruise and Demi Moore.

Posted by Kim in Baltimore at 9:28 PM