Aloha to Alyssa J. Montgomery and THE DEFIANT PRINCESS 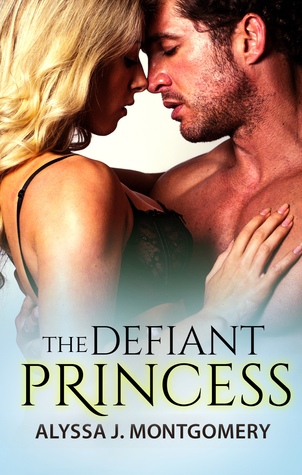 I met Alyssa J. Montgomery at RT in Dallas.  I invited her to be a guest on my blog ... and here she is!  From her bio,

Alyssa grew up in Central Queensland, Australia, the youngest of five children.

After school, she studied Speech-Language Pathology at the University of Queensland. During her days as a student, and also upon graduation, she moon-lighted in restaurants as a professional pianist.

Her first Speech Pathology job took her to the Hunter Valley, New South Wales. Then, the lure of travelling the world called, and she left her profession for 18 months to become an international flight attendant for Qantas Airways. The excitement of travelling to exotic locations on different continents was fabulous and one she enjoyed…until she met her soul mate! Romance became the priority over travelling. Given that most of the time Alyssa was on one side of the world and her husband, an international pilot, was on the other, it was time to go back to Speech Pathology, the other profession she loves!

Now, still very happily married and three wonderful children later, Alyssa has obtained a Masters Degree in Science and continues to work in her busy private Speech Pathology practice. An avid reader of romance since her late teens, she began writing romances in the evenings when the birth of her twins kept her at home as a full-time mother.

Apart from her writing and work, Alyssa’s favourite pastimes include cheering her very sporty children on from the sidelines, travelling with the family, reading, entertaining, gardening and playing tennis. She and her family live south of Sydney on a five acre property that they share with a dog, three horses, seven goats, numerous chickens and visits from deer, wallabies, echidnas and beautiful native birds.

Kim:  Queensland! What is your favorite sight, sound, and smell of Australia?

Alyssa:  The scent of Eucalyptus trees after the rain or walking through the bush and smelling the wattle trees in flower.  My favourite sound is definitely a kookaburra laughing. That is unique and always makes me smile.  Above the sea, there's nothing like flying into Sydney on a sunny day and seeing the white sails of the opera house and the harbour bridge. However, I love all the coral and reef fish I see if I'm diving the Great Barrier Reef.

Kim:  Qantas Airways - do you have a funny story to share about your travels?

Alyssa:  So many to choose from...The cabin crew often used to play tricks on each other. Flying into Christchurch one day, the Flight Service Director asked a brand new crew member if she had her urine sample yet. She was quite flustered, but he assured her he was serious and gave her a little sample container. When she had complied she took it back to him. He told her she was late so she'd have to take it straight to the captain. Of course, to the poor girl's embarrassment, the captain had no idea what she was talking about!

Alyssa:  Joining the Romance Writer's of Australia, connecting with other writers and attending conferences was the start I needed. I also had critique partners and we all learned from each other.  Having a very supportive husband has been a huge help! He was the one who told me to see if there was a group I could join, and he's the one who takes over with the family when I have a deadline to meet.

Kim:  Tell us about THE DEFIANT PRINCESS - what inspired it?

Alyssa:  I had read a few desert romance stories. Travelling to Dubai, riding on camels in the desert and staying the night was what really provided inspiration. It was such different landscape. Dune after dune, an infinite number of twinkling stars in the sky. The cultural differences were also interesting. I started thinking about my heroine. How would it feel to be a desert princess, born to rule such a land, but raised since early childhood in a different country and culture? What forces would have torn the princess from her birth land, how would that have impacted upon her emotionally and what would it take for her to return? Most importantly as a romance writer, how would romance develop for her and how would she find her happy-ever-after?

Alyssa:  As well as the contemporary romances I write, I also pen medieval romance under the name Alyssa James. Just today I sent off the second medieval romance "Knight of Her Dreams" to my editor. It's the second in a trilogy (the first was Knight of Her Heart). I have another contemporary all plotted out and ready to write (no title yet), so I'll get started on that, then write the third medieval romance in the trilogy.   Given that I'm still working in my private speech pathology practice and also have three very busy school-aged children, those two projects will see me through to the end of 2015!

Mahalo, Alyssa, for chatting with us today!  I am giving away a book choice from my convention stash to one randomly selected commenter.  To enter the giveaway,

2.  Comments are open through Saturday, August 22, 10 pm in Baltimore.

Other books from Alyssa J. Montgomery ...