Aloha to CC Humphreys and THE BLOODING OF JACK ABSOLUTE 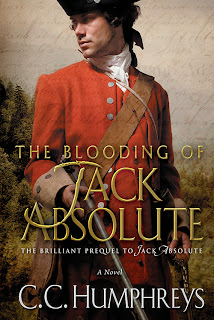 On this day in 1777, the Continental Congress approved the Articles of Confederation after 16 months of debate.   The Articles served as the first constitution for the 13 founding states of the USA.   The year 1777 serves as the starting point for CC Humphreys to unveil his Jack Absolute series with JACK ABSOLUTE:  A NOVEL:

The year is 1777. As the war for American independence rages across the sea, London is swept off its feet by Jack Absolute, the dashing rogue in Richard Sheridan's comedy The Rivals. That is, until the real Jack Absolute, former captain of the 16th Light Dragoons, returns after years abroad to discover this slander of his reputation. 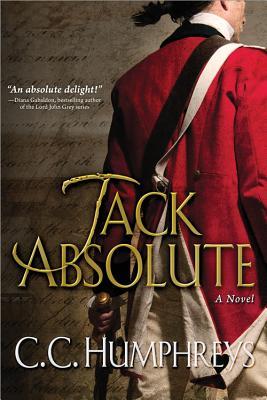 Humphreys - actor, swordsman, and writer - penned two more novels before taking readers back to the beginning with the prequel, THE BLOODYING OF JACK ABSOLUTE:

Before he can become a man, he must first learn to kill...

London: 1759: Life is easy for Jack Absolute, a young raconteur loved by the ladies and envied by his schoolmates. With a place secured at university and a baronetcy at hand, his future seems bright—if he can just stay out of trouble. But when Jack is caught read-handed with a powerful lord's mistress, his good fortune is destroyed, forcing him to seek a new fate in the dangerous New World during the brutal Frecn and Indian Wars.

There, marooned amid hostile Indians and fierce colonial rivalries, the bawdy schoolboy disappears and a man emerges. Jack's survival depends on winning the friendship and help of the natives, but those come at a high price. In order to become the man they could eventually trust, Jack Absolute must first be blooded. And in order to be blooded, he must do the unfathomable. He must learn to kill.

The gripping prequel in C.C. Humphrey's riveting historical series, The Blooding of Jack Absolute sweeps readers into the ruthless wilds of North America and tracks the stunning transformation of a young dreamer into a daring, larger-than-life hero.

CC Humphreys joins us today with a guest blog on the influence of acting and sword play on his writing...

I am often asked how my career as an actor has affected my writing. The simple answer is… in every possible way.

I write in a very ‘dramatic’ style. People say, ‘Ooh, I can see the movie!’ To which I reply, ‘I hope you do!’ But I think that’s because I write very visually, always striving to conjure a scene that will be very active in a person’s mind, using all the senses. The action, too is heightened, ‘Character in Peril’ being the way I define it. And I use acting tricks to develop situations, particularly with the use of my creations pursuing strong objectives, meeting obstacles – often other character’s objectives – and depicting the clashing results. It simplifies it for my process and makes the action clear.

Dialogue is also a tool I love – moving action forward in conversation, revealing character by what they say, what they don’t say, how they say it. As an actor that was a primary tool, and getting the voice really taps you into a character. I try to make all the voices distinct, as they would be in a play with lots of good actors playing the roles.

Creating characters, putting them in perilous situations, seeing how they react – it is the very stuff of drama.

As for sword fighting? Since it is my other great love – and one of the main reasons I became an actor was so that I would be paid to leap around with bladed weaponry – it was inevitable that I would choose to depict men, and often women, who would be passionate and gifted in the deadly arts. I love writing action, from duels to battles, and I think I do them well. Not so detailed that they put off people who are less passionate, though. I don’t write for experts. Like with any aspect of historical fiction, the details must be there so that people feel in the period. But the essence of ‘Character in Peril’ is that any reader, expert or less so, will follow the character they care about – hate, love – into dangerous action. My wife says she even reads my battle scenes – not her sphere of interest, strangely! – because she is invested in the character. So if someone is coming at him with a tomahawk, she wants to see how Jack or Ate will deal with it!

I am influenced by a host of things – love of history being the primary one. But acting and swordplay? I think you will always see those in my novels. You have to write what you love, right?


Mahalo, CC, for sharing insight to your writing.   Check out a free ebook preview of JACK ABSOLUTE:  A NOVEL in Kindle (link), Nook (link) and Kobo (link). 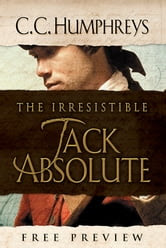 I am giving away a print copy of THE BLOODYING OF JACK ABSOLUTE to one randomly selected commenter.  To enter the giveaway,

1.  Leave a comment about the American Revolution - have you visited any sites (battlefields, halls, taverns, etc)?

To learn more about CC Humphreys and his books, check out his website at cchumphreys.com. 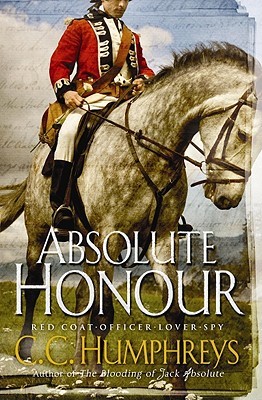 Posted by Kim in Baltimore at 9:35 PM