Aloha to Robyn DeHart and THE TEMPTATIONS OF ANNA JACOBS

Robyn DeHart joins me today for a cozy chat about her new release, THE TEMPTATION OF ANNA JACOBS.   From her bio,

When not writing, you can find Robyn hanging out with her family, husband (The Professor) a university professor of Political Science and their two ridiculously beautiful and smart daughters, Busybee and Babybee as well as two spoiled-rotten cats. They live in the hill country of Texas where it's hot eight months of the year, but those big blue skies make it worth it.

Kim:  We are nosy here at SOS Aloha. Texas! What is your favorite sight, sound, and smell of the Lone Star State!

Robyn:  Oh, cool question. I LOVE my state. Most of us Texans are actually quite obnoxious about our state pride. My most favorite thing is the big blue sky. We really do have some serious wide-open spaces here in the Lone Star State. In fact when I lived in Tennessee for 4 years after The Professor and I first got married, I felt claustrophobic all the time. The interstates are lined with these gorgeous pine trees. It’s really lush and lovely. And I hated it. I felt closed in, couldn’t see where we were going or what was up ahead. I know that’s probably ridiculous, and I guess it just goes back to what I’m used to. But I love that big, beautiful blue sky and being able to see if from one side of the horizon to the other.

Kim:  Let's chat about those spoiled rotten cats (as I have a few). Do they inspire? Interfere? Appear in your work?

Robyn:  Inspire? Doubtful. Interfere? Often. You know how cats always want to be on you and well, mine don’t particularly care if I already have something in my lap, whether that be my laptop or one of my kiddos. But I have put cats in my books before, I like to read books with animals and since I’m 100% a cat person those are the critters that show up in my books. But I love my furbabies and love being at home and writing and having them nearby. 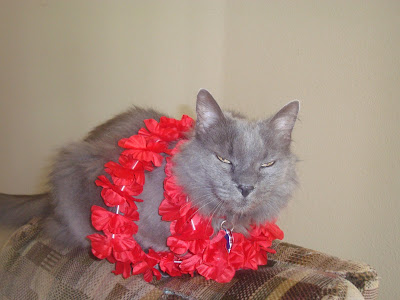 Kim:  I was honored to meet you at RWA/DC in 2009 (just before I moved to Hawaii ... last summer we moved back to Maryland). I have enjoyed following your career since then. If you could go back in time, what advice would you give yourself, especially with the future of publishing.

Robyn:  I totally remember that, Kim. You were standing behind me in line at the hotel registration desk and you were actually holding one of my books! Still one of my fondest reader-meet moments. Wow, what advice would I have given that girl? You know probably just to settle in for a long ride. So often in this business a writer will appear as if out of nowhere and just take off and become an instant success. More often than not though most of us just plug along writing book after book, having some successes and some failures. I don’t think I ever expected to be an overnight success, but I think I probably thought I’d be a bit further in my career than I am now. Patience and endurance and a love of story is what keeps me going.

Kim:  How do you juggle your writing commitments to your books, the Jaunty Quills, and Peanut Butter on the Keyboard?

Robyn:  Thankfully the group blogs I’m apart of are filled with understanding wonderful women who pick up the slack when you need help. I also use computer reminders so I don’t forget and utilize the date feature in wordpress to schedule my blogs so I can write them ahead of time. I try to do my blogging on Sundays to get set up for the week so it doesn’t eat into my writing time.

Kim:  Tell us about THE TEMPTATIONS OF ANNA JACOBS - what inspired it?

Robyn:  It’s book 2 in my Dangerous Liaisons series. Like most people, I’ve always been fascinated by the mystery of the Jack the Ripper killings. For many years I wanted to write about it, tackle the whole thing in some capacity. The fact that I already have established myself as a Victorian-set writer made things easier. In any case if you’ve read the first book, The Secrets of Mia Danvers, then you know that it opens with Mia, my blind heroine, witnessing a murder. In my series Jack the Ripper continues killing after his fall of 1888 rampage, only a few months later.

This second book is about Drew, the brother of Alex (hero in Mia Danvers). He’s just been imprisoned for the killings and in many ways this is the least of his worries. Enter Anna Jacobs, a medical student, and he definitely has his hands full.

Kim:  What's next for Robyn DeHart?

Robyn:  In July the second book in my Masquerading Mistresses series – my first Regency-set series – releases. It’s called For Her Spy Only and features the scarred and ill-reputed Marquess of Conventry and the one woman he’s never been able to forget.

Thanks for having me today and for participating in my blog tour!

When Drew Foster is released from prison, he doesn't much care about salvaging his soiled reputation. Though he's working undercover, everyone in Victorian London believes him guilty of the Jack the Ripper murders and that his brother paid for his "innocence."

Despite her genteel upbringing, Anna Jacobs is intent on finishing medical school and becoming a physician. Society's ridicule has never bothered her, but when her brother, the Yard's best detective, is scorned for letting Drew go, she confronts the one man who can set the record straight at a ball. She certainly doesn't count on the rogue being dashing and handsome, nor on him stealing a passionate kiss.

Anna's brazen contempt for his dangerous reputation captivates Drew, but he is harboring secrets that make him unfit to court any proper woman. As he finds himself an outsider among his colleagues at Scotland Yard, the feisty beauty offers up her medical knowledge to assist him on the case. But when the real killer returns to London to continue his reign of terror, can Anna find safety in Drew's arms? 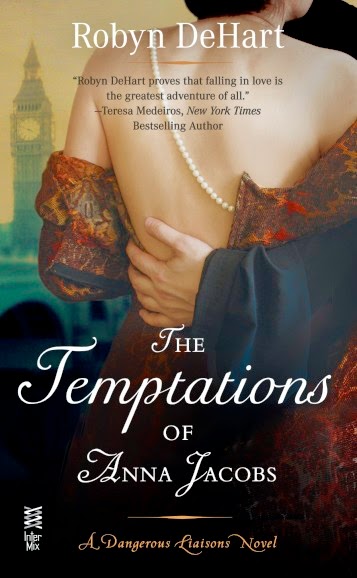 National Bestselling author, Robyn DeHart's novels have appeared in the top bestselling romance and historical romance lists. Her books have been translated into nearly a dozen languages. Her historical romantic adventure series, The Legend Hunters, were not only bestsellers, but also award-winners, snagging a Reader's Crown and a Reviewer's Choice award. She had three releases in 2013 and 2014 will see four more, all set in the popular historical romance Regency and Victorian eras.

Known for her "strong dialogue and characters that leap off the page" (RT Bookclub) and her "sizzling romance" (Publishers Weekly), her books have been featured in USA Today and the Chicago Tribune. A popular writing instructor, she has given speeches at writing conferences in Los Angeles, DC, New York, Dallas, Nashville and Toronto, among many others.

Robyn is hosting a special giveaway ...

Plus Robyn offers an excerpt from THE TEMPTATIONS OF ANNA JACOBS

She was quiet for several moments. He watched her face as she considered all the possibilities. Even now, the taste of her lips stayed with him, and he wanted more. More of her kisses, more of her smiles. Simply more of Anna.

Perhaps she had other thoughts that could explain the differences in the injuries, or the use of an alternate weapon.

“Why did you kiss me? The other day?” she asked.

Drew felt his brows rise in surprise. “Is that what you were thinking about? I suspected your thoughts were more academic in nature.”

She shrugged. “Academic or not, I am still a woman.”

“It seemed the thing to do,” Drew said with a shrug of his own.

“‘It seemed the thing to do,’” she said, mocking his tone. She frowned. “That’s not a very good answer.”

He resisted the urge to smile. Hell, he didn’t know why he’d kissed her. Because the desire to do so had been so overwhelming he hadn’t been able to resist her lips. In fact, he longed to embrace her again, right now. “What would be a good answer?”

“How the devil should I know?” Her hand fluttered to her chest. “I don’t go around kissing unsuspecting people.”

“Fair enough. Well then, I kissed you because I wanted to.” Perhaps honesty would appease her curiosity. “Because your mouth is tempting, even though you talk far too much.”

“That doesn’t even make any sense. Well, the bit about my talking too much, I admit I can be verbose—”

“You’re doing it again,” he interrupted her. He leaned forward, toward her chair. “Only makes me want to kiss you again.”

She waved her hand. “That’s ridiculous.”

“The mere notion of kissing you? Hasn’t any man ever expressed a similar interest?”

A blush stained her exposed throat, marring her lovely creamy skin. Her hand followed the telltale sign of her embarrassment and she fiddled with the necklace around her throat. She swallowed visibly. “I don’t see how that is any of your business. I’m not even certain how we got on this discussion,” she said.

“You asked me why I kissed you.”

“Yes, and your answer is unsatisfactory. I shall merely have to conclude that you men are a peculiar lot.” She pointed at him.

“I’m going to kiss you again, Annabelle,” he said softly.

“Would you like me to kiss you right now?”

“I cannot answer that.” She shook her head fervently. “It would be utterly improper.”

“You, a lady going to medical school and assisting me with an undercover investigation of a murder? Last night we broke into a government building. Your behavior hasn’t exactly been the pinnacle of propriety.”

Her brow furrowed. “That is quite different.” Her tongue darted out and wet her lips.

He felt a stab of desire, hot and poignant in his gut. Oh yes. He wanted her. Whatever the reason, logical or not, he wanted her quite badly. Too badly, in fact, for him to kiss her now when his passions were so close to the surface. It was entirely too likely they would not be interrupted, that no one would come along and stop him from ruining her here in his parlor.

“You already answered my question,” he said.

She frowned. “I don’t believe I did.”

“Oh yes, Anna, you want me to kiss you very badly. Now that I know that, I’m going to make you wait. For a little longer.”

“You are an insufferable man!” she said as she came to her feet.
Posted by Kim in Baltimore at 10:29 PM