Today is the Literacy Autographing to kick off RWA's Annual Conference in San Antonio:

At the "Readers for Life" Literacy Autographing, hundreds of romance authors meet with and sign books for fans, with the proceeds from book sales going to literacy organizations. Since 1990, RWA has raised more than $825,000 to fight illiteracy.

This year, proceeds from the Literacy Autographing will benefit ProLiteracy Worldwide, Literacy Texas, Restore Education, and Each One Teach One San Antonio.

I plan to look for Jessica Scott for reasons that are obvious from her bio,

USA Today bestselling author Jessica Scott is a career army officer; mother of two daughters, She's written for the New York Times At War Blog, PBS Point of View: Regarding War Blog, and Iraq and Afghanistan Veterans of America. She deployed to Iraq in 2009 as part of Operation Iraqi Freedom/New Dawn and has served as a company commander at Fort Hood, Texas. She's pursuing a PhD in Sociology in her spare time and most recently, she's been featured as one of Esquire Magazine's Americans of the Year for 2012. 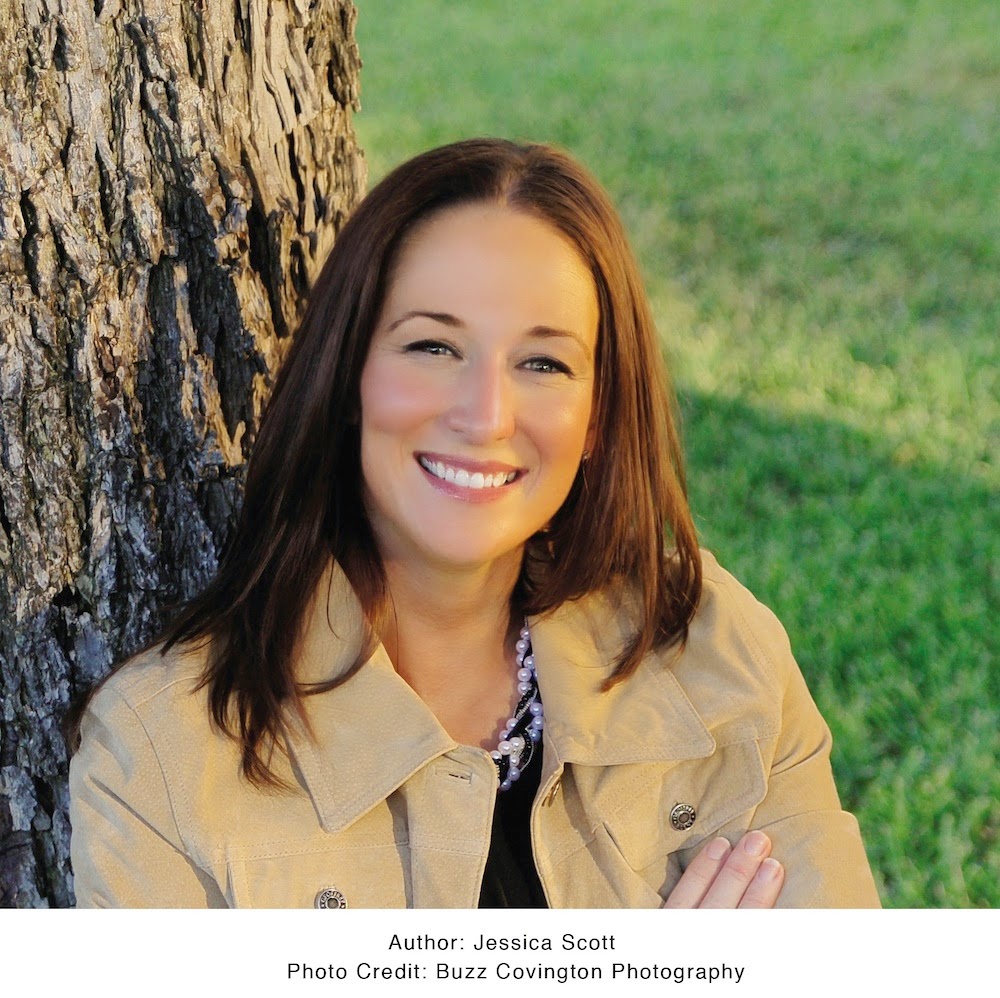 Jessica is celebrating the upcoming release of BACK TO YOU, available July 29 from Forever Romance:

Army captain Trent Davila loved his wife, Laura, and their two beautiful children. But when he almost lost his life in combat, something inside him died. He couldn't explain the emptiness he felt or bridge the growing distance between him and his family-so he deployed again. And again. And again...until his marriage reached its breaking point. Now, with everything on the line, Trent has one last chance to prove to his wife that he can be the man she needs ...if she'll have him

Laura is blindsided when Trent returns home. Time and again, he chose his men over his family, and she's just beginning to put the pieces of her shattered heart back together. But when Trent faces a court martial on false charges, only Laura can save him. What begins as an act of kindness to protect his career inflames a desire she thought long buried-and a love that won't be denied. But can she trust that this time he's back to stay?
B&N
IndieBound
Books A Million
iTunes
Amazon 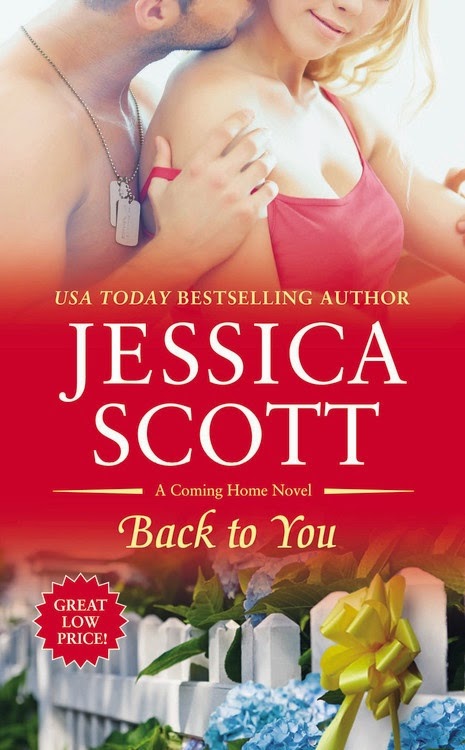 For this blog tour, I asked Jessica for the Top 5 things she enjoyed eating/drinking/doing when she returned home from deployment (other than embracing family).  Here are her answers ...

3. Sleeping in my own bed

4. Taking as long and hot of a shower as I wanted

5. Walking around my house barefoot after a year in boots/sneakers/flipflops.

Mahalo, Jessica, for your service to our country!  I hope you've enjoyed all these things!

Forever is offering a fabulous giveaway ...

... plus an excerpt from BACK TO YOU:

“So, to what do I owe the honor of this visit?” she asked, minimizing her e-mail to be able to focus.

“Don’t throw me out of the office,” he said, trying to keep his voice light. “But I need to talk to you about Trent’s case.”

Laura leaned back in her chair, folding her arms over her chest, and started counting to ten.

“I know you’re having a hard time with him.”

Laura sucked on her top lip for a moment before answering. “I wouldn’t necessarily call filing for divorce a hard time.”

“And that’s what I need to talk to you about.”

She ground her teeth but after a moment nodded.

“Listen, there’s no case against Trent. It’s weak at best. With the Article 32 about to start, we have a good chance of getting it stopped here before it goes to court-martial. But I need to plant doubt that the allegations against him are true.” He met her gaze. “I need you to do that.”

Laura chewed on her bottom lip, playing his words over and over in her head, not understanding what he was asking of her. “What do you mean, you need to plant doubt?”

“The primary witness against your husband, PFC Adorno—”

Patrick’s smile was humorless. “Yes, well, that’s part of the prosecution’s problem. She’s alleging that Trent was inappropriate but the problem is that she and Lieutenant Randall were caught in their shenanigans downrange.”

Laura frowned. “So you think this is a ploy to get herself out of trouble?

“Her and her husband. If they were working together to steal the missing weapons systems, then what better way to get out of trouble than to make this stuff up against Trent? Takes the focus off her and her husband completely.” Patrick leaned forward, tapping his index finger on the desk. “If I can cast Trent as a sympathetic family man who would never do anything like what she’s alleging, this case is all but dismissed. I’m not attacking her. All I have to do is make Trent look better than the story she’s telling and we’ve got a win.”

“And you need me to paint on a happy face and be the loving wife.”

Patrick shook his head. “No, I need you to be one half of a loving couple. And I need you to do it publicly where everyone can see it—in the PX, in the chow hall, everywhere. I need the officers on this board to believe exactly what I’ll be telling them on the day of the hearing.”

She looked down at her empty ring finger, absently rubbing the bare skin beneath the bandage. “Everyone knows that we’re having problems, Patrick.”

“Then make sure everyone knows you’ve fixed it.” He leaned back. “I wouldn’t ask you to do this if I didn’t think it was our best shot at getting this whole thing thrown out.”

She looked up at him. “Why didn’t Trent ask me to do this?”

Patrick swallowed and looked away. “He refused to drag you into this,” he said quietly. “For what it’s worth, I don’t in a million years believe the allegations against Trent. I don’t think he would ever, ever be unfaithful to you.”

Laura pressed her lips together in a flat line. “You’re wrong, Patrick. He’s been cheating on me for years. It was just with the army instead of another woman.”

“Let me think about it,” she said quickly. “I won’t say no out of hand but I can’t make this decision on a whim.”

Patrick leaned across the desk, gripping her hand. “I know this is hard for you, Laura. I know what I’m asking you to do.”

She said nothing for a long moment and he gave her a sympathetic but firm smile. “Give it some thought, okay?”

When she was alone, she sat there, staring at the picture of her family. Wondering how she was going to bring him back into the kids’ lives and then rip him out again. What he was asking wasn’t fair. He had no idea what this was going to do to her family.

She glanced at the photo on her desk as she typed furiously, trying to get ahead of the flood of e-mails in her inbox.

There was a quiet rap on her office door. “I’m not here,” she said quickly, looking up.

Her fingers froze on the keyboard. Her heart stopped in her chest.

Trent stood in the doorway. He had a duffle bag slung over his shoulder. His glasses hid the darkness of his eyes. There was a streak of dirt on his cheek. An assault pack hung limply from his left hand.

A thousand emotions ripped through her all at once, rioting for supremacy as she drank in the sight of her husband.

Ex-husband, she reminded herself. Or at least he was supposed to be.

She wished that this were a normal homecoming. One where she would rush across the small space and crash into him. His arms would come around her and she would inhale the strong spicy scent of his skin. Feel the heat of his touch. Savor that first, wild kiss.

Instead she had this. This empty chasm between them, echoing with loneliness.

And she had no idea how to cross it.
Posted by Kim in Baltimore at 12:00 AM