Robin Bielman is celebrating the release of VEILED TARGET, Book One in her Veilers series:

Tracking down Veilers—non humans—is only a sideline for Tess Damon. Vengeance for her fiancé’s murder is her reason for living. But with two botched jobs on her record, if she fails to eliminate her next mark, she’s dead. She’s not afraid to die, but not before she gets even. Too bad fate has a really bad sense of humor.

Hugh Langston, a wolfen half shifter, lives to keep both humans and his pack safe. But when rogue humans kidnap his apprentice, his rescue mission is compromised by a hot-as-hell, kick-ass woman who makes him think only one thing: mine.

Tess tries to ignore her feelings, but temptation trips her up. Especially when Hugh figures out he’s her next target and forces her into an inconvenient alliance that tests all the laws against their attraction. Now, with the line between good and evil getting blurrier by the minute, it becomes clear Tess’s only hope of living to see another day—and finding a murderer—lies with the one man she’s supposed to kill. 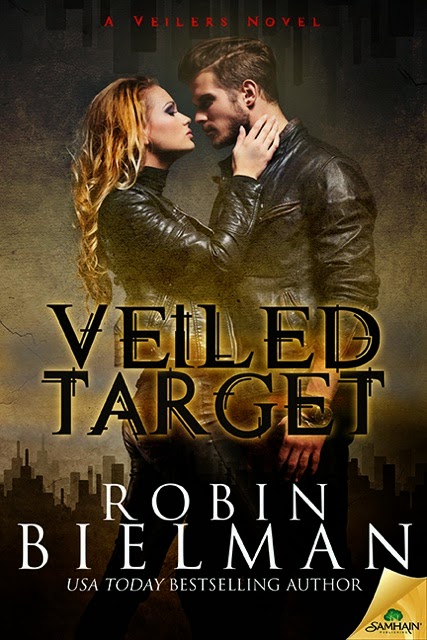 USA Today Bestselling Author Robin Bielman lives in Southern California with her high school sweetheart husband, two sons, and crazy-cute mini Labradoodle, Harry. When not attached to her laptop, she can almost always be found with her nose in a book. She also likes to run, hike, and dip her toes in the ocean. Filled with wanderlust, she longs to visit many different places and fulfill her curiosity. She wouldn’t mind indulging her sweet tooth in every location either. She’s a lover of sticky notes, cable television shows and coffee drinks. Writing is a dream come true, and she still pinches herself to be sure it’s real.

She writes contemporary and paranormal romance and loves to connect with readers. Learn more and sign up for her newsletter on her website at robinbielman.com. 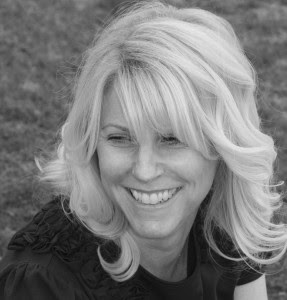 She woke to a click, but didn’t move or stir or budge. The bed was sooo comfy and cozy and maybe if she stayed still, whatever had caused the click would go away.

Her eyes opened wide at the sound of the deep, rugged announcement. “Go away. I’m not talking to you.”

“I’ve got a couple things for you,” he answered, ignoring her no-talking policy.

Darkness still filled the room and she wondered what time it was. It felt like she’d had a solid eight hours sleep so it couldn’t be too early. In fact, she felt more rested than she had in a long time. She stayed motionless and quiet.

“I’m coming in.” The downlight above her head turned on.

She didn’t care. His actions didn’t mean she had to act.

Wait. He’s coming in? She sat up, bringing the covers with her. She told herself he didn’t have x-ray vision, but that didn’t stop the tingles popping up all over her body. She was naked, and Hugh was coming into the room.

He wore jeans that sat low on his hips and a plain white T-shirt that clung to his lethally sexy chest muscles. His hair was mussed, like he’d showered and then ran his fingers through it. His face was clean-shaven. His blue eyes deeper than the waters she’d scuba dived in Australia. God, did he have to look so irresistible this morning?

She stayed quiet. Because she was mad about being locked in the room or because he took her breath away, she wasn’t sure.

“This no talking thing could work to my advantage.” He stepped closer.

To her nakedness. Did he know she wasn’t wearing anything underneath the sheets? And oh geez, what did her hair look like? Going to sleep with it wet surely meant she had a rat’s nest thing going on.

When he got to the edge of the bed, she watched him venture a peek toward the bathroom. Her eyes followed his and there in plain view were the blue dress and black lace undergarments on the floor.

She pulled the sheets tighter against her. “What time is it?” Talking might get her mind off her birthday suit.

“She speaks.” His eyes held hers with the same mixture of heat and desire she’d noticed last night. “It’s eleven.”

“Eleven? Holy shit. I never sleep this late.” And note to self: Don’t look into his eyes anymore.

He smiled. “Guess you needed it.”

“More like the lack of window space kept the room dark. You’ve got some nerve, you know that?” She ran a hand through her hair to feel what it looked like. Not too bad.

Admitting she didn’t would not work in keeping him at bay, so she lied. “Yes. I do.” She frowned for further effect.

He dropped something on the bed. “Well, maybe this will make up for it. Clean clothes. And your phone.”

Relief and forgiveness overcame her. Wait. Her phone? “You went through my purse?” It would’ve been a lot better if he’d plopped her bag on the bed, but he was only acting the same way she would have.

“Again, I don’t think you’re surprised. You’ve got some major arsenal in there. And your driver’s license picture doesn’t do you justice.”

He looked less and less sexy by the minute. “You looked through my wallet? Who the hell do you think—”

“I think I needed to confirm you are who you say you are. Tess Elizabeth Damon.” A grin that would have made her fling the sheets to the side and shout “take me” had she not been so pissed at him for snooping flanked his handsome—no, not handsome!—face.

“I’m a P.I.E. eliminator. What makes you think that license is real? I could be Tess one day and Betty the next.” Tess Damon was her real name, but if anyone looked her up, they’d learn only what P.I.E. wanted them to.

Hugh continued to grin. “You don’t look like a Betty.”

“I thought we’d been over that, but I’m willing to revisit it if you—”

“I want you the hell out of this room and away from me.” Her blood boiled. Hugh Langston was goddamn annoying.
Posted by Kim in Baltimore at 6:47 AM