Aloha to RC Ryan and THE MAVERICK OF COPPER CREEK

Ash MacKenzie broke his share of hearts when he left Copper Creek all those years ago and struck out on his own. Tall, tough, and proud. That's how Brenna always remembered him, and from the looks of things, he hasn't changed much. Once, she thought he could save her-whisk her away from her rough childhood home and start fresh together. Now she knows better . . .

Ash isn't planning to stick around town long. As soon as he uncovers the truth about his father's death and makes sure the family ranch is safe, he'll be back out on his own. And then he runs into Brenna Crane. It broke his heart to leave her once-a herd of stampeding horses couldn't make him do it again. But Brenna has made a new life for herself, one that doesn't include him. Now he just has to convince her to give their first love a second chance. 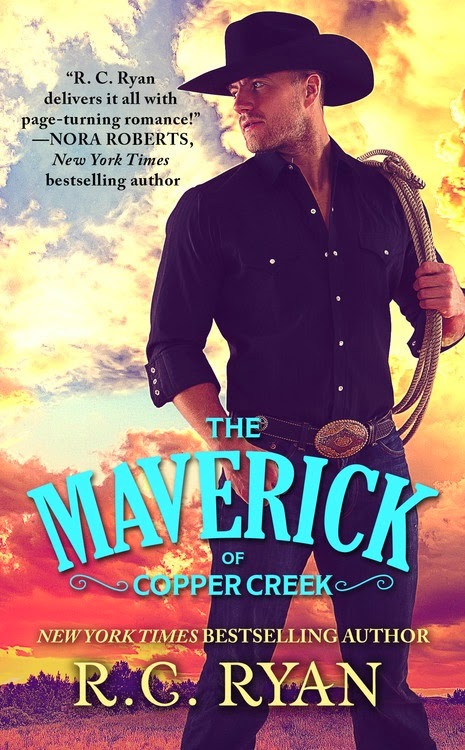 New York Times bestselling author R.C. Ryan has written more than ninety fiction novels, both contemporary and historical. Quite an accomplishment for someone who, after her fifth child started school, gave herself the gift of an hour a day to follow her dream to become a writer. In a career spanning more than twenty years, Ms. Ryan has given dozens of radio, television, and print interviews across the country and Canada, and has been quoted in such diverse publications as the Wall Street Journal and Cosmopolitan. She has also appeared on CNN News, as well as Good Morning America. R.C. Ryan is a pseudonym of New York Times bestselling author Ruth Ryan Langan.


Forever offers an excerpt from THE MAVERICK OF COPPER CREEK:

She was looking up into his eyes, her smile wrapping itself around his heart and squeezing. “Thanks for driving me to town. And for helping Vern. Tonight was…special.” She shrugged, looking shy and awkward.

He seemed about to say something. Instead he swore and let his hat drop to the floor, while he dragged her into his arms.

“Why do you have to be so sweet and forgiving? Why can’t you just hate me for leaving you?”

“Hate…” She blinked. “Ash, I tried that. But I realize now I could never hate you.”

His eyes were hot and fierce as he lowered his head. His kiss was so hot, so hungry, it rocked her back on her heels. A kiss that was all fire and flash and sizzle. It drained her even as it filled her. There was nothing tentative or teasing about this. It was bold and possessive. Demanding. And it spoke of a blazing-hot need.

With lungs straining, he lifted his head. For a moment he merely touched a finger to her cheek while he stared into her eyes, as though trying to read her feelings.

Then, muttering an oath, he lowered his head and kissed her again.

This time it was achingly slow and thorough, his mouth whispering over her eyelids, her cheek, the corner of her mouth, until, with a guttural moan, she laced her fingers around his head, clinging to him as her lips found his.

Now it was all heat and frantic need, as each took from the other with a hunger that bordered on desperation, mouths seeking, bodies straining.

His hands were in her hair, though he couldn’t remember how they got there. Hers were raking his back, her nails digging through the fabric of his shirt in a frantic effort to get closer.

He turned her, pressing her against the closed door, his body imprinting itself on hers as he took the kiss deeper, then deeper still, his mouth restlessly seeking what he really wanted. He couldn’t get enough of her.

The quick, jittery charge to their systems had them practically crawling inside each other’s skin. And still it wasn’t enough.

When he took a moment to change the angle of the kiss, his name was torn from her lips in a frantic cry. “Ash!”

At the sound of his name on her lips, he suddenly went very still.

Chests heaving, they stepped a little apart, waiting impatiently for their world to settle.

Was the floor tilting? Was the room spinning? Or was it their heads? Their hearts?

When he could finally catch his breath he managed to whisper, “Sorry.” He shook his head. “Not for that kiss. I’ve had a hunger for that since I first saw you again. But I…almost crossed a line. I guess I let myself forget for a moment that you’ve moved on with your life, Sunshine, and I’m not a part of it anymore.”

When she said nothing, he bent and retrieved his hat.

He left without another word.