May is Military Appreciation Month - Aloha to Paige Tyler 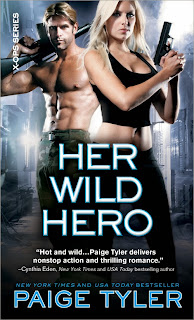 Paige Tyler is participating in the SOS America Military Tribute on Thursday, May 14, in Dallas - free tickets are still available at this link.  From Paige's bio,

Paige is a USA Today Bestselling Author. She graduated from The University of West Florida with a degree in education in 2000, but decided to pursue a full-time career as a writer in 2004. Since then, she’s written over fifty books in several genres, including paranormal, contemporary, western, sci-fi and erotica. She loves writing about strong, sexy, alpha males and the feisty, independent women who fall for them. From verbal foreplay to sexual heat, her stories of romance, adventure, suspense, passion and true love will leave you breathlessly panting for more.

She and her very own military hero (also known as her husband) live on the beautiful Florida coast with their adorable fur baby (also known as their dog). Paige graduated with a degree in education, but decided to pursue her passion and write books about hunky alpha males and the kickbutt heroines who fall in love with them.

Paige is celebrating the release of HER WILD HERO:

Department of Covert Operations Training Officer Kendra Carlsen has been begging her boss to let her go into the field for years. When he finally agrees to send her along on a training exercise in Costa Rica, she’s thrilled.

Bear-shifter Declan MacBride, on the other hand, is anything but pleased. He’s been crushing on Kendra since he started working at the DOC seven years ago. Spending two weeks in the same jungle with her is putting a serious strain on him.

When the team gets ambushed, Kendra and Declan are forced to depend on each other. But the bear-shifter soon discovers that fighting bloodthirsty enemies isn’t nearly as hard as fighting his attraction to the beautiful woman he’ll do anything to protect.

Today we are excited to sit down with Declan MacBride and Kendra Carlsen, the heroes of Paige Tyler’s May release Her Wild Hero! The latest title in Tyler’s hot X-Ops series finds Declan and Kendra deep in the Costa Rican jungle fighting for their lives. Kendra and Declan are here to give us a peek at their jungle adventures and a survival tip for would-be X-Op agents!

“It had taken them the better part of the day to traverse the rough terrain between the site of the ambush and the landing zone. On the trip out, they’d covered at least two swampy areas, a practically vertical ridgeline, and about three miles of thick jungles in that time.”

Kendra’s Jungle Tip: So, you don't like climbing over endless mountain ridges? You might not want to complain. It's a lot better than slogging through slimy swamp water up to your waist and praying none of the mud seeps into places you don't want it.


May is National Military Appreciation Month. For the month of May, I am giving away one grand prize of books and swag from the authors featured this month (link). Plus five more commenters - one for each branch of service - wins a book choice from my convention stash. To enter the giveaway,

1.  Have you visited a jungle?  I've hiked through a few jungles in Hawaii.