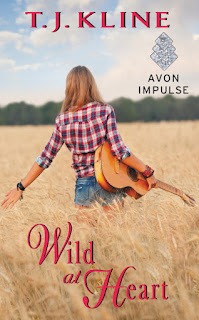 Bailey Hart has never felt like she measures up to her cousins at Heart Fire Ranch. It doesn’t help that her rocker attitude has made her a black sheep in her small town. So when her band gets their big break in Los Angeles, “Wild Hart” can’t run fast enough…If only there weren’t so many reasons to stay.

After a harrowing stint in the Oakland Police Department, sheriff’s deputy Chase McKee has returned home a hero, and yet he feels anything but. And when he finds out Bailey might be leaving for good, the feelings he’s always harbored for his best friend’s cousin just won’t stay hidden. He knows she wants to get the heck out of Dodge, but he’s hoping to show her where she really belongs—with him.

Will this Wild Hart turn her back on love, or will she realize her heart really belongs closer to home? 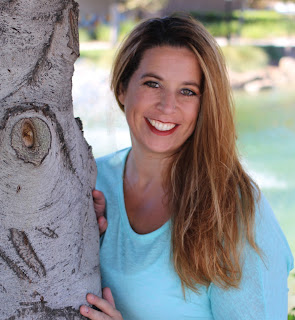 T. J. Kline was raised competing in rodeos and rodeo queen competitions since the age of 14, She has thorough knowledge of the sport as well as the culture involved. She has had several articles about rodeo published in the past in small periodicals as well as a more recent how-to article for RevWriter. She is also an avid reader and book reviewer for both Tyndale and Multnomah.


T.J. Kline offers an excerpt from WILD AT HEART ...

Chase hoped his laughter hid the fact that he was so frickin’ turned on right now he was ready to explode. Watching Bailey swinging her hips, belting out the song at the top of her lungs, with that voice—husky, rich, and so damn seductive. He knew her voice could be as smooth as honey, like when she was trying to convince Justin to let her con him as kids—or trying to con him out of a speeding ticket—but he’d never expected she could sing like that. And that growl thing she did had him thinking about how he might make her do it again.

Just what he needed, one more thing about her to keep him awake at night, wishing things were different between them.

Gracie let out a sharp bark and trotted to the couch, pressing her nose against Bailey’s neck. Chase moved to the edge of the sofa and held a hand out to help her up, but she brushed him off. “I can manage just fine.”

“I see that.” He laughed but took a step back, tucking his fingers into the front pockets of his jeans. Bailey had an independent streak a mile wide and was twice as exasperating. He turned off the vacuum cleaner and lifted it upright, moving it away from the couch as she tangled her feet in the cord again. “Watch yourself.”

She sighed loudly and shot him a death glare. “I said, I’ve got it.” She sat up on the couch and Gracie jumped up beside her, licking her chin. “You think you could call off your mutt?”

She sounded irritated, but Chase didn’t miss the smile tugging the corners of her mouth up or the way her eyes shimmered playfully as she ran her hand over Gracie’s head, rubbing her favorite spot behind her right ear.

“What can I say? She likes you.” He couldn’t help himself from pressing his luck. “But not as much as she loves me. Isn’t that right, Gracie?”

When he’d originally had the idea to become her handler, he’d never expected her to become his best friend and, these days, the closest thing he had to a woman in his life. The dog jumped down from the couch and sat at his feet, staring up at him with dark eyes filled with pure adoration.

“At least someone does,” she shot back. “Why are you here again?”

“I came by to talk to Jessie about a couple boys in foster care right now. My dad thinks they might be a good fit for her program.”

“Then you should probably head back to the house to talk to her and let me finish cleaning so I can get to Julia’s in time to make dinner.”

“She’s evaluating a couple horses so I’ve got to wait a few minutes. I saw your bike and thought I’d come say hi and make sure you hadn’t killed yourself on it yet.”

She bent over and untangled the knots she’d tied in the vacuum cord while she’d been spinning. The sight of her firm, rounded rear pointed his direction was enough to send his thoughts spiraling into the cosmos. She glanced back at him over her shoulder and caught him staring at her butt.

“Anything else you need?” She let her eyes skim over him, from the top of his short hair to his work boots, as she stood upright. “Or maybe you need a few more minutes to check out my ass?”

The corner of his mouth lifted in a smirk and he took a step closer. “What can I say, Bailey? Those jeans make your ass look great.”

Her eyes sparked with fire but a smile caressed her lips. He took another step toward her, standing only a few inches away, close enough that he could see the pulse racing at her throat and could hear the intake of her breath. He only had to bend his head slightly.

Move another inch and Justin will kill you.

Instead of kissing her the way he wanted to, he bent over and wound the vacuum cord around the pegs on the machine, giving her the opportunity to look at his rear. “There, your turn.”

Bailey’s frown flitted over her face so quickly he barely noticed it before she rolled her eyes at him. “Thanks, but I think I’d rather finish cleaning.”

“Nothing’s stopping you, unless you can’t force yourself to stop looking,” he teased. A blush rose, coloring her cheeks.

He’d never seen Bailey at a loss for words. She always had some smart-ass comment and to see her flustered, even for a moment, surprised him. He stood up and watched as Gracie followed her into the breakfast nook, where she slid the cleaners back into a small carryall tote.

“Sorry to be the one to break it to you, Chase, but those slacks do nothing for you.” That’s the Bailey I know.

Any other guy might have taken her at face value or been insulted by her comment, but he felt his heart pound harder in his chest at her words. He’d always been a “glass is half-full” kind of guy.

“So you have been checking out my butt?”

The color crept over her cheeks again, turning them pink, but she shrugged nonchalantly. “You wiggled it enough at the bachelor auction. I think it’s burned into everyone’s brains whether we want it there or not.”

Chase tried to ignore the disappointment that sank into the pit of his stomach. For a second, he’d thought . . .

It was better this way, better that she thought he was just being ornery and harmlessly flirting, the way they always did, always had. “Someday, Bailey, you’ll admit you want me.”

“And someday, Chase,” she said as she turned back toward him with her hand on her hip, “hell will freeze over.”