Continuing our virtual tour of Navy Base Coronado (link and link), from Early Aviators (link),

On September 25, 1917, Lieutenant Earl W. Spencer, USN, a 29-year-old Naval Aviator, Academy Class of 1910, was ordered to duty in command of Naval Air Station, San Diego. He was instructed to ... establish a permanent Naval Air Station for training purposes.

Alas, Lieutenant Spenser would be eclipsed by his socialite wife, Wallace Warfield Spencer.  From the CINC Navy website (link),

Even the base's first commanding officer, Lieutenant Commander Earl W. Spencer Jr., USN, added a degree of celebrity to North Island. His wife was Wallis Warfield, a prominent socialite who remarried twice, and become the late Duchess of Windsor for whom King Edward of England gave up his throne in 1936.

Presumably military life (and an alcoholic husband) did not suit Wallis' tastes.  Still, she was the "first wife" of Navy aviation on Coronado Island.  Remember, "coronado" is crown in Spanish - a foreshadowing of a crown that never came for the Baltimore-born socialite.

Spencer's second (of five) wife, Miriam Maze, remarried Vice Admiral Arthur Radford, who later became the Chairman of the Joint Chiefs of Staff.  Radford, like Spencer, graduated from the Naval Academy and received his wings as a Naval Aviator.

Next:  Aircraft carriers pull into port.

1. Leave a comment about Navy ships - have you toured any?

I toured the USS Carl Vinson, an aircraft carrier, when it pulled into Pearl Harbor in 2012 (link). 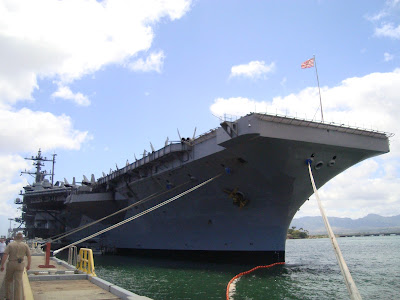