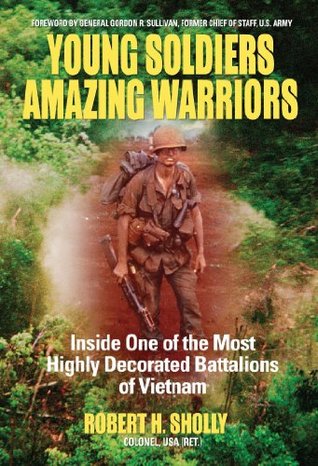 2015 is the 50th anniversary of the Vietnam War for American Forces.  The Department of Defense is commemorating this milestone at this link:

The commemorative program will include activities and ceremonies to achieve the following objectives:

To thank and honor veterans of the Vietnam War, including personnel who were held as prisoners of war (POW), or listed as missing in action (MIA), for their service and sacrifice on behalf of the United States and to thank and honor the families of these veterans.

To pay tribute to the contributions made on the home front by the people of the United States during the Vietnam War.

To highlight the advances in technology, science, and medicine related to military research conducted during the Vietnam War.

To recognize the contributions and sacrifices made by the allies of the United States during the Vietnam War.

Young Soldiers Amazing Warriors is an absorbing, detailed and substantial memoir of military service on the ground in Vietnam, as well as a well-earned tribute to the brave young men with whom Sholly served. Sholly writes both from his own perspective and that of his surviving men in his combat rifle battalion, with eye-witness accounts in their own words.


Young Soldiers chronicles the beginning of the famous “nine Days in May” battles of the 4th Infantry Division in Vietnam and the heroes who fought them, including 4 Medal of Honor Winners. Personal accounts of boys become men reveal the riveting events of firefights, human wave attacks, hand-to-hand combat, overrun units, survivors, and sacrifice that combine to tell the story in action-packed detail.

We will have several Vietnam veterans at the 12th Annual SOS America Military Tribute during the RT Booklovers' Convention in Dallas - link for more details and free tickets.

Check out my spotlight of military hero workshops at the RT Booklovers' Convention on my travel blog at this link and link.