I am currently touring college campuses in Florida with my teens.   Perhaps I'll find my own Hideaway Cove ... meanwhile, Anna Sullivan is celebrating the release of HIDEAWAY COVE from Forever Romance:

Jessi Randal walked away from her last relationship with a baby and a broken heart. Now, years later, the last thing this single mom wants is to give Windfall Island-and all its nosy residents-anything more to gossip about. But the moment she lays eyes on the tall, sexy stranger with the slow Southern drawl, she knows she's in delicious trouble . . .


Holden Abbot is on the island to find the missing heir to the Stanhope family fortune. It's his job to charm as many secrets out of the town as possible. And if he can charm Jessi into his bed, even better. When all evidence points to her as the heir, a dangerous enemy sets his sights on Jessi and her son. Now Holden will have to risk everything to protect the family he's come to love. 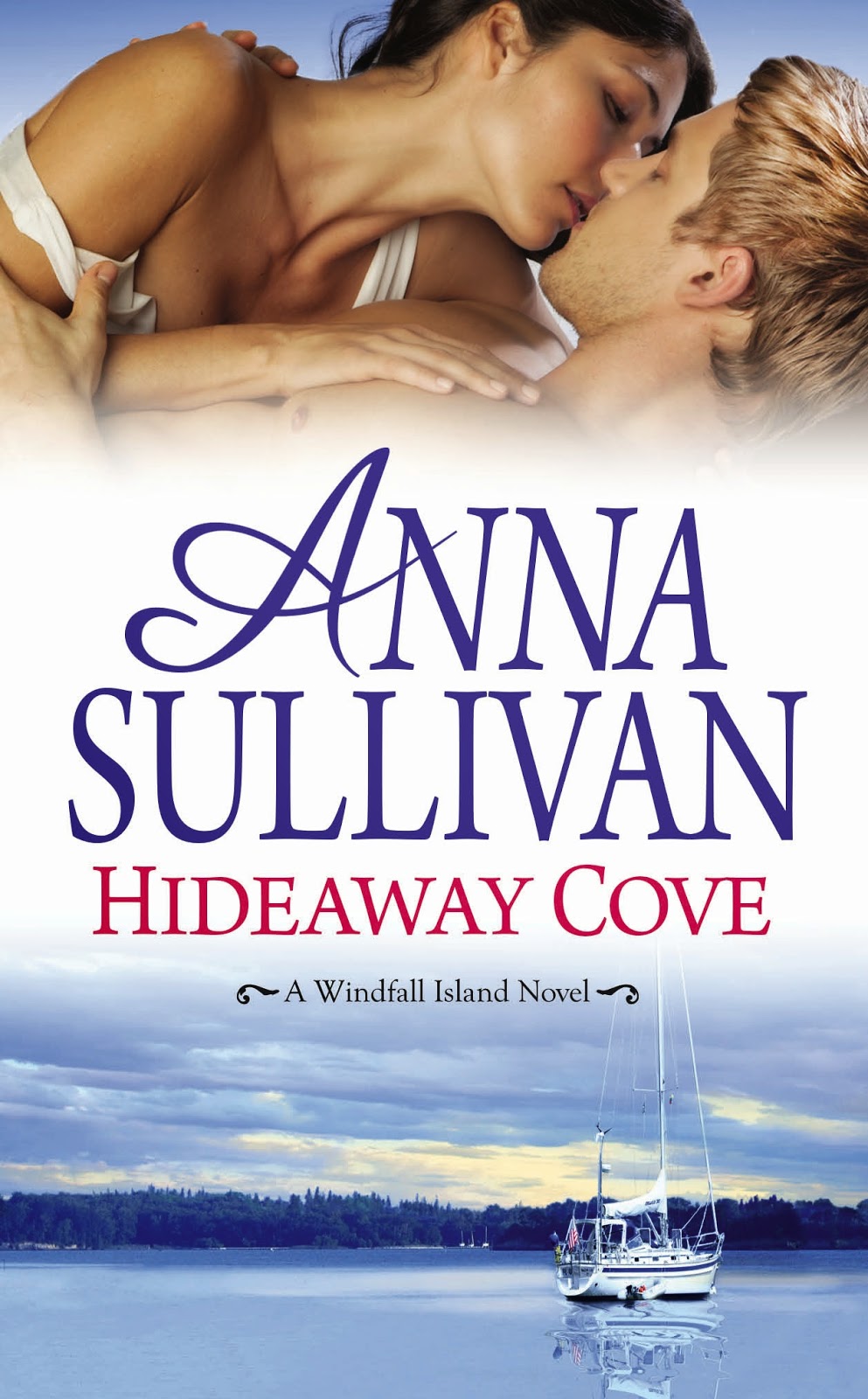 Anna Sullivan was born and raised in southeastern Michigan, the seventh of nine children, whose claim to fame was reading five books a week in grade school. Needless to say, her obsession with the written word only grew from there-despite a short, and misguided, foray into the world of computer science (the "sensible" job path). She still lives in Michigan, with her husband, three children and two dogs whose life of leisure she envies but would never be able to pull off.

He walked out of the office, saw her spine stiffen when she heard him coming up behind her where she sat at her desk. “How about some lunch?” he suggested, smiling over the way her chin came up.

“Coming down with the flu that’s going around?”

“Upset about Lance? It couldn’t have been easy seeing him with Benji Sunday.”

Jessi whipped around to glare at him. “Like you give a da—” She broke off, and he watched her clamp down on the anger until she had herself firmly under control again.

It was fascinating. “I’m fine.”

“Don’t tell me what I am or how I feel. Go back to your little room and ignore me. You’re good at it.”

“But it pisses you off.”

“Like I have time to think about you.” She sniffed, pouted a little. “You don’t even make the list.”

“Maybe you could share some of the load. I have a shoulder or two that aren’t doing anything right now.”

Just for a moment, something flared in her eyes, something that looked like yearning. Then her gaze shuttered, and she turned her back on him again.

“C’mon, Jess, I’m not such a stranger anymore, not after that kiss the other day.”

She went quiet and still, and he knew she’d gotten caught in that memory the same way he did, every time he revisited it. Which was every other minute, he admitted.

“I’m sure you can find someone who’d love to put your shoulders, and the rest of your body parts, to work,” she said.

“Are we back on that again?”

“You’re jealous,” he said, which made her spin back around and jerk to her feet.

“Of you?” she squeaked, jamming her hands on her hips. “Oh, I forgot, the whole world revolves.”

“Why can’t you just admit you missed me the last couple of days?”

She pasted a slight frown on her face, let it clear. “That’s right; I didn’t see you at all. Now I know why I had such a peaceful weekend.”

“Peaceful?” Hold gave a burst of derisive laughter. “Might as well try to sell bacon to a pig, darlin’. I’d as soon believe you weren’t half out of your mind with worry, seeing as Lance Proctor spent yesterday afternoon with Benji.”

“It’s none of your business, no matter what the rest of the people on this island think.”

“Island? Hell, you are an island, Jessi. You think you don’t need anybody else, that you can take all the weight of the world on your little shoulders forever without it burying you alive?”

“The hell with this.” Hold grabbed her by the upper arms, jerked her to her feet, and took her mouth.

He’d expected at least a token resistance, and a token resistance was all Jessi made before she melted into him. Hold let the kiss spin into a soft and lovely exchange of warmth and comfort, let that warmth wind its way slowly into his blood and haze his mind.

Jessi wrapped her arms around his waist, pressed her tight little body against him, and tangled her tongue with his. The warmth in his blood turned to heat. His brain simply emptied out—so did the rest of him—emptied then filled back up with her. Her taste, her scent, her heat.