It's a trifecta romance celebration for the three day weekend ... Laura Drake, Sandra Hill, and Marilyn Pappano join us for a cozy chat!

Kim:  A la Twitter style, can you describe your book (or series) in 140 characters or less.

Sandra:  Navy SEAL Justin “Cage” LeBlanc swore there would be SNOW ON THE BAYOU before he returned Louisian, but his grandmother is dying, and that wily Cajun matchmaker Tante Lulu has plans for him.

Marilyn:  Aha! 140 characters exactly! (I'm so not good at this Twitter thing!)  Jessy and Dalton had one incredible night together. Can they set aside the guilt, start from the beginning, and build a love that will last?

Kim:  What inspired your setting?

Laura:  I am the number one fan of Professional Bull Riding. Sweet on You takes place mostly on the road, between stops on the tour. I used my motorcycle-seat memories of the West to portray the settings.

Sandra:  I’ve always loved Louisiana since I accompanied my husband on a business trip to New Orleans many years ago. It’s almost as if I have a genetic memory of the place, even though I don’t have any direct ancestors who lived there.

Marilyn:  Except for the years the Navy sent my husband and me on a tour of the southern half of the U.S., I've lived the rest of my life here in Oklahoma. I wasn't overly impressed with it when I was a kid, but after living a lot of elsewheres, the state began looking better and better. I absolutely adore it here. The people are strong and generous, the countryside is gorgeous, the weather is . . . uh, changeable. J We've got everything here.

Kim:  Did you learn any interesting facts while researching for the book?

Laura:  Yes! I’d actually been to a PBR event at the Honda Center in Anaheim, and wanted to use it in the book, so I contacted them to see if I could get a peek ‘behind the scenes’. They were gracious enough to take me on a tour of the locker rooms and event floor. Way cool!

Sandra:  Lots of stuff about Mardi Gras, its history, the masks and costumes, New Orleans itself. The heroine in this book is a skilled mask maker.

Marilyn:  This was an easier book in that regard. It's the third in the Tallgrass series, so I've got my town laid out and I know the surrounding countryside. I know my characters now, too. Jessy works with dogs, my favorite critters in the world, so my own five fur-babies helped there. There really wasn't anything to research for the book, so all that effort went instead into getting the characters' emotions down pat.

Kim:  In your book, your characters have to find their way back to love. What’s your favorite part about the second-chance-at-love theme?

Laura:  That dreams are never hopeless. I want to believe that if you work hard enough, long enough, and want something badly enough, you can make the impossible, possible!

Sandra:  We rarely have a chance for do-overs in life; so, it’s nice when two people can find their way back to each other. Plus, I like to write (and read about) couples who have a history. They know which buttons to push on each other, both in a good and bad way.

Marilyn:  It's so hopeful! Who doesn't love the idea that they could get another shot at happily-ever-after, that they could fix—or at least atone for—what went wrong and make sure it goes right this time?

Laura:  That one’s easy. Fried chicken, mashed potatoes and gravy, corn on the cob, and homemade sweet rolls. I came by these hips honestly!

Sandra:  Beignets, and my own Tante Lulu’s Peachy Praline Cobbler Cake (the recipe is in the back of WILD JINX).

Marilyn:  I have incredibly fond memories of she-crab soup, a specialty of the Low Country region of South Carolina. And mustard-based barbecue sauce in the Augusta, Georgia area. Oh, and the oyster stew we used to get at a little place outside one of the back gates of Camp Lejeune . . . heaven in a bowl! 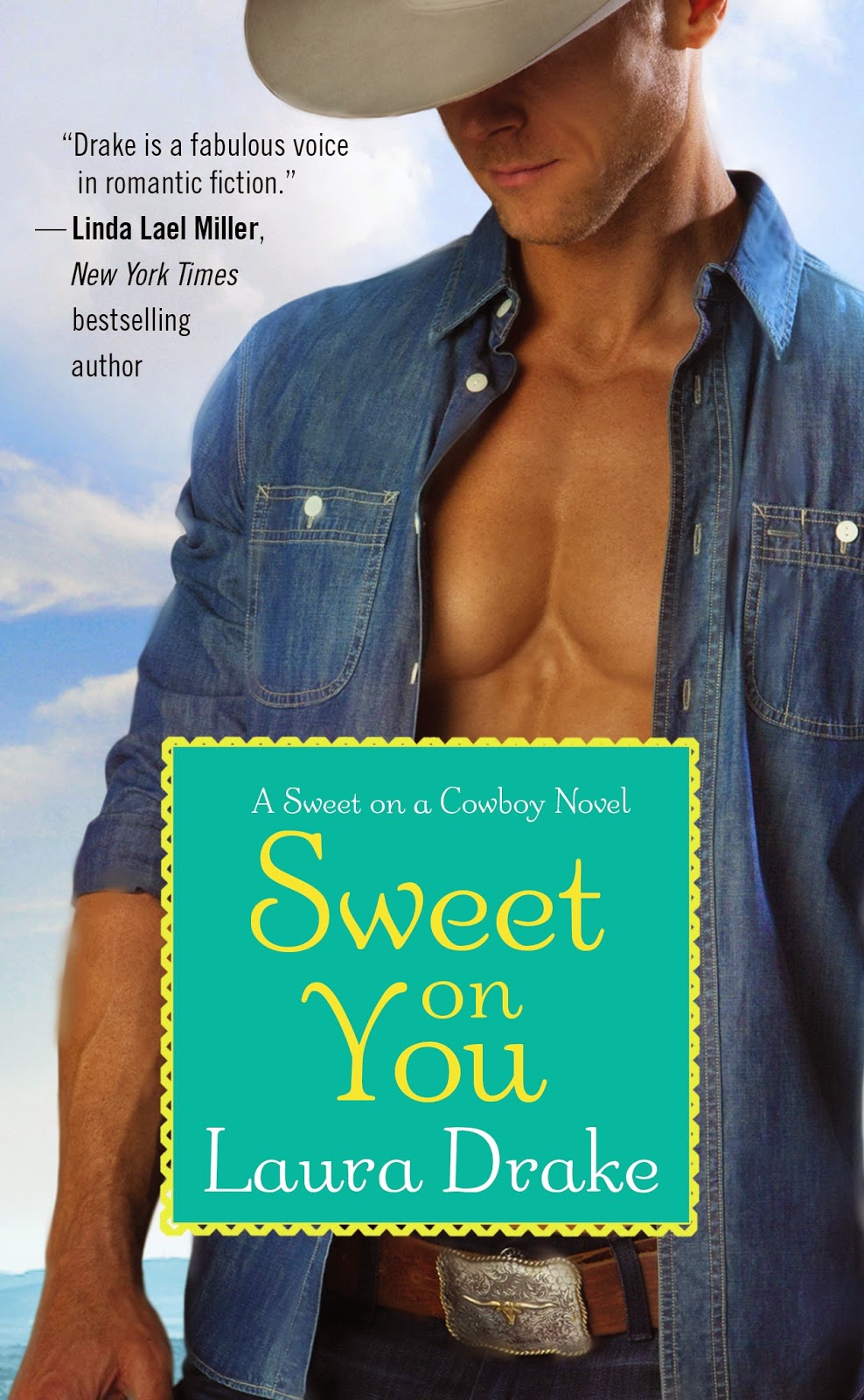 Ex-army medic Katya Smith has always healed other people's pain. Now she has to deal with her own. Taking a job as an athletic trainer on the Pro Bull Riding circuit seems like the perfect escape from her grief-except Katya doesn't know anything about bulls, and even less about the tough men who ride them. She doesn't expect to fall for the sport, or for one tantalizing cowboy who tumbles her defenses.

For rodeo champion Cam Cahill, fifteen years of bucking bulls have taken their toll on his body. Before he retires, he wants a final chance at the world title-and he doesn't need some New Age gypsy telling him how to do his job. But when the stunning trainer with the magical hands repairs more than his worn muscles, everything changes. Soon Cam finds himself trying to persuade Katya to forgive her past so she can build a future . . . with him. 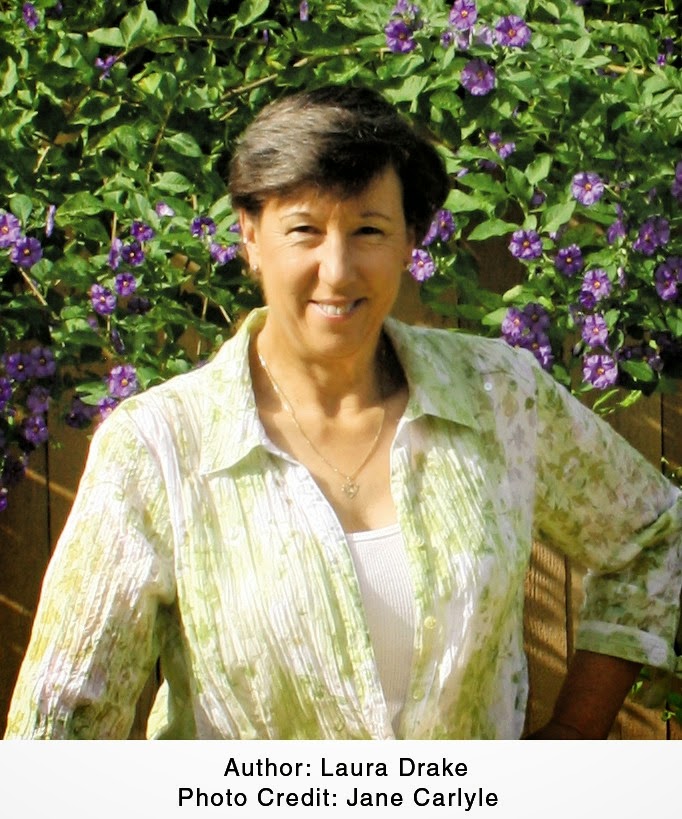 Laura Drake grew up in the suburbs outside Detroit, though her stories are set in the west. A tomboy, she's always loved the outdoors and adventure. In 1980 she and her sister packed everything they owned into Pintos and moved to California. There she met and married a motorcycling, bleed-maroon Texas Aggie and her love affair with the West was born. Laura rides motorcycles: Elvis, a 1985 BMW Mystic, and Sting, a 1999 BMW R1100.

In Texas, Laura was introduced to her first rodeo, and fell in love. She's an avid fan of Pro Bull Riding (PBR,) attending any event within driving distance, including two PBR National finals. She is hard at work at her next novel. 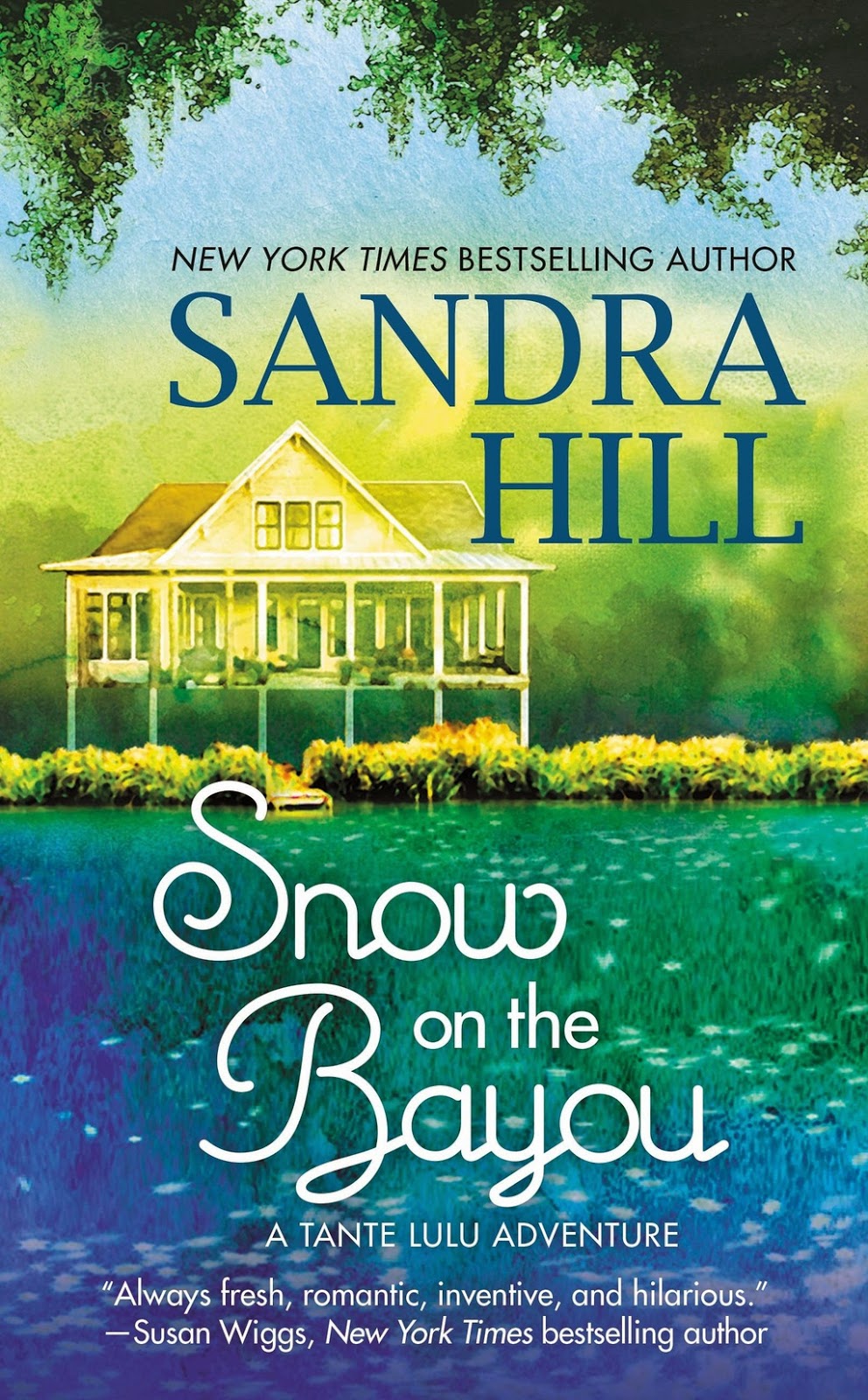 THE BAYOU'S BADDEST BAD BOY IS BACK!
Joining the Navy was the second best thing that ever happened to Justin "Cage" LeBlanc, the rebel son of a no-account convict. The first was Emelie Gaudet, the love of his life . . . until he was forced to leave town and swore there would be snow on the bayou before he ever returned. Now, only his mortally ill grandma can bring the injured Navy SEAL back to Terrebone Parrish, where he must face his past-and Emelie, who's even more beautiful than she was all those years ago.

Bourbon Street blues singer Emelie is once bitten, twice shy. When she learns that Justin is back in town, she wants nothing to do with the once wild Cajun teenager who fled with the law on his tail-and broke her heart. But she can't deny the red-hot attraction between them . . . or his efforts to prove he's finally changed his hell-raising ways. Can she trust that this time the bad boy of the bayou will be the best man for her? 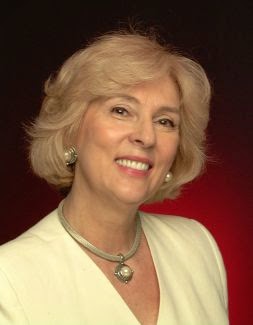 Sandra Hill is a graduate of Penn State and worked for more than 10 years as a features writer and education editor for publications in New Jersey and Pennsylvania. Writing about serious issues taught her the merits of seeking the lighter side of even the darkest stories. She is the wife of a stockbroker and the mother of four sons. 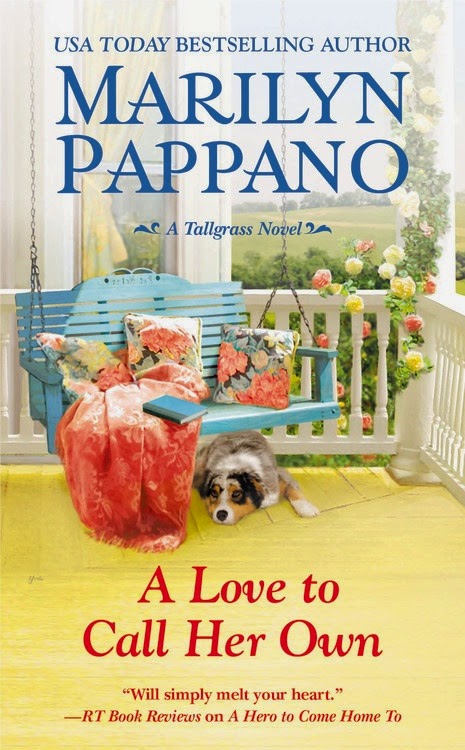 It's been two years since Jessy Lawrence lost her husband in Afghanistan, and she's never fully recovered. Drowning her sorrows didn't help, and neither did the job she'd hoped would give her a sense of purpose. Now trying to rebuild her life, she finds solace in her best friends, fellow military wives who understand what it's like to love-and lose-a man in uniform . . . and the memory of one stolen night that makes her dream of a second chance at love.

Dalton Smith has known more than his fair share of grief. Since his wife's death, he revels in the solitude of his cattle ranch. But try as he might, he can't stop thinking about the stunning redhead and the reckless, passionate night they shared. He wasn't ready before, but Dalton sees now that Jessy is the only woman who can mend his broken heart. So how will he convince her to take a chance on him? 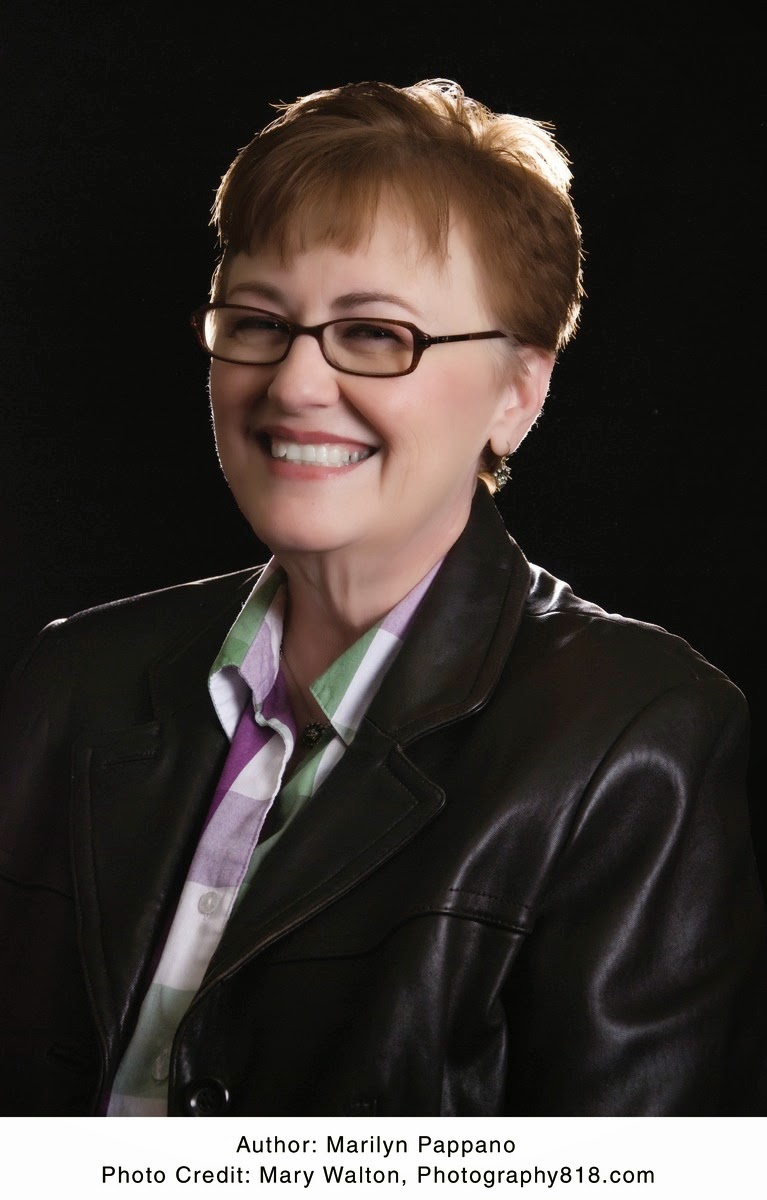 Known for her intensely emotional stories, Marilyn Pappano is the USA Today bestselling author of nearly eighty books. She has made regular appearances on bestseller lists and has received recognition for her work in the form of numerous awards. Though her husband's Navy career took them across the United States, he and Ms. Pappano now live in Oklahoma high on a hill that overlooks her hometown. They have one son and daughter-in-law, an adorable grandson, and a pack of mischievous dogs.

Posted by Kim in Baltimore at 9:13 PM