Aloha to Ava Miles and THE HOLIDAY SERENADE 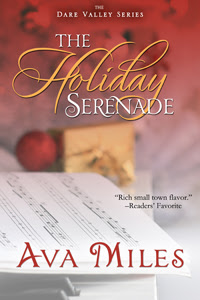 I scheduled holiday romances this week ... so get ready to be merry!  Joining me today is Ava Miles.   From her bio,

Ava Miles burst onto the contemporary romance scene after receiving Nora Roberts’ blessing for her use of Ms. Roberts’ name in her debut novel, NORA ROBERTS LAND, which kicked off The Dare Valley Series and brought praise from reviewers and readers alike. Much to Ava's delight, BlogCritics says "It [NORA ROBERTS LAND] captures the best of...a Nora Roberts novel,” while USA Today's Happily Ever After blog praises the series noting its “wonderful, idyllic setting... [and] great characters." Ava continued The Dare Valley Series in FRENCH ROAST, which Tome Tender says “raised the entertainment bar again” and then THE GRAND OPENING, which reviewer Mary J. Gramlich says “is a continuation of love, family, and relationships.” Now, Ava releases the fourth book in the series, THE HOLIDAY SERENADE, with her recognized wit and charm, creating happy endings with humor and heart. A descendant of generations of journalists, Ava—a writer since childhood—now lives in her own porch-swinging-friendly community with an old-fashioned Main Street lined with small businesses. Much like Dare Valley.

Hi, all. I’m Ava Miles, a contemporary romance writer with a unique obsession with Gone With The Wind—rather like my hero’s mother in my new Christmas story called THE HOLIDAY SERENADE. I’d like to thank Kim at SOS Aloha for giving me the opportunity to share the fun inspiration behind my steamy hero.

My hero’s mom named her son after the iconic figure of Rhett Butler. My Rhett is a professional poker player who goes by RBB on the poker circuit, but in personal circles, he’s just Rhett Butler Blaylock. He’s a bit flashy and likes to push the boundaries of conventional society, like his namesake.

Rhett was a bit wild until he met the heroine, single mom Abbie Maven, a few years back. He’s known for dressing like a bad-boy country singer with a lot of leather…and sometimes snakeskin. He likes the cowboy hats, and even more so, he loves the custom boots.

So while he may not dress like the iconic Rhett Butler, he certainly has the same devil-may-care attitude. That is, until he finally connects with Abbie. She’s the sister of his best friend, and he’s always had a secret thing for her. But she’s so marriage material, what he might term super conservative, and he understands that. She’s a single mother, after all, like his mama was. He respects that.

But then one day while he’s visiting her brother, he returns from a run—not wearing his over-the-top bad-boy getup. And Abbie is gardening, one of her passions. The look she gives him is what his childhood preacher called brimstone, and that’s it. The suppressed attraction they have for each other is unleashed.

They conduct a secret affair for six months because Abbie is…well, ashamed of the over-the-top image he’s carefully cultivated to draw crowds to watch him play poker. (Deep down, I know he could beat the pants off the Union soldiers the original Rhett Butler plays against in Gone With The Wind.) But Abbie is no Scarlett except that she’s also been toughened by hardship.

When Abbie breaks things off, finally realizing their “relationship” can’t go anywhere, and afraid at being discovered, he’s devastated. More than he ever expected to be. But he gets it. And agrees to be friends.

Yet the hurt doesn’t go away—and neither does the longing for her.

So after playing poker overseas for a year in a desperate ploy to be more than a plane ride away from her, preventing him from coming back and begging to get her back, he stops fighting it and comes up with a plan to become the man she would be proud to marry. Yes, marry.

Him. Rhett Butler Blaylock—the man who’d sworn he was NOT the marrying kind.

Rather like the dashing Rhett Butler from one of my favorite movies. Remember the line: “Don’t you remember, my dear? I am not the marrying kind.”

I sigh just thinking about the way he said that in his sexy Southern accent.

He’s set on winning her heart and proving himself. He tones down his image. And then he comes up with the best idea ever. He’s going to serenade her. He enlists his best friend, country singer Rye Crenshaw’s help writing the song.

Rhett stood under her window a few yards from the house, dressed in a sheepskin coat with white wool-out seams. He had a microphone in his hand. His friend, Rye, was seated on a foldout chair in a full-length black leather winter coat at what looked to be a portable piano, his black cowboy hat obscuring his face as he played the ballad of her song.

They were insane. It was freezing outside.

She opened the window, and the arctic blast made her shiver. “What are you doing?”

Rhett tipped his finger to his forehead even though he wasn’t wearing a cowboy hat like Rye. His ears had to be frozen.

“I decided to serenade you like I should have the first time.”

So what do you think? Does my version of Rhett Butler live up to the original?

Check out THE HOLIDAY SERENADE and see for yourself.


Mahalo, Ava, for reminding us that Rhett is a timeless hero!   To celebrate the holidays, I am giving away a Hawaiian ornament ... I stocked up before I moved.  To enter the giveaway,

1.  Leave a comment about GONE WITH THE WIND - did you read the novel?  See the movie?  Do you have a favorite character other than Rhett?

To learn more about Ava and her books, check out her website at avamiles.com.

Also, I posted pictures from the NJRW Conference, with giveaway, on my travel blog at this link.  I didn't take a picture of it, but the book seller offered tote bags with a picture of the the Margaret Mitchell House.

Posted by Kim in Baltimore at 7:39 PM