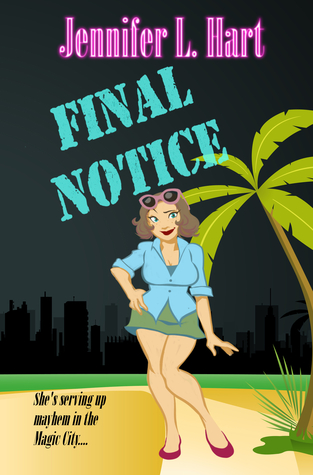 Mary Gramlich, the Reading Reviewer, introduced me to Jennifer L. Hart through her Laundry Hag Series:

Jennifer L. Hart knows that surviving as military spouse takes persistence, comfort food and a stellar sense of humor. Her books often focus on people who’ve lived the military lifestyle and zany antics of neurotic heroines, who like to eat, drink and have fun. Her works include The Misadventures of the Laundry Hag series, the upcoming Damaged Goods mysteries and Murder Al Dente, coming soon from Gemma Halliday Presents.

Jennifer offered me the opporunity to review her first book in the Damaged Goods mysteries series, FINAL NOTICE:

She's serving up mayhem in the Magic City....

FINAL STRAW
Dishing out bad news is Jackie Parker's job. So when her boss grabs her assets one time too many, she serves him her notice and hopes he chokes on it. There must be a better way for a certified process server to make a living in Miami than working for a lousy lecherous lawyer. Whatever Jackie decides, her number one priority is to spend time with her husband, Luke, preferably without his brother Logan--AKA the Dark Prince.

FINAL WARNING
Despite Logan's objections, Luke asks her to join forces in their own property management team, Damaged Goods. Drawing the line between professional and personal lives proves challenging, especially when Logan serves her an ultimatum--tell Luke the truth about what really happened the night they first met, or he will. Sexual harassment is looking better and better.

FINAL NOTICE
Fester Gomez is three months behind on the rent for his pricey South Beach condo and Damaged Goods is on the job. Either they convince the tenant to pay up or he'll face eviction. The simple task turns deadly when the team discovers Gomez missing and a Jane Doe slowly decomposing in his bathtub. Serving a killer up to justice, wrestling family secrets--it's just another day on the job for Damaged Goods. 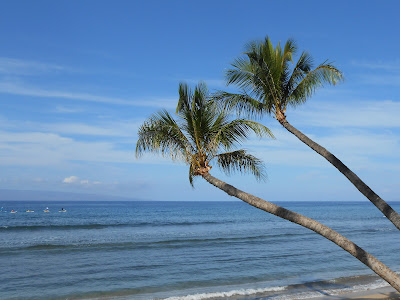 Should we shoot them? - Fiona, BURN NOTICE, also set in Miami

I grew up in Coral Gables, a Miami suburb, long before "Magic City" exploded into an international mecca.  I did not realize Miami was nicknamed "Magic City" until I reviewed FINAL NOTICE.   Indeed, Hart delivers magic with a capable heroine who overcame a few hard knocks in her life.   Jackie Parker has enough confidence in herself, and her marriage, to quit her job with a sexist boss.   Her husband, Luke Parker, is transitioning from the Marine Corps to odd jobs with his brooding brother, Logan Parker.   As the three sit around a wobbly kitchen table to ponder their future, Jackie suggests their own property management company named DAMAGED GOODS.

One step forward, two steps back as their first job to evict a tenant leads them to a dead body.  Yet Jackie is an optimist and finds the sunny side of every situation with her affectionate husband, supportive mother-in-law, and loyal friends.   The ensuing mayhem yields plenty of humor along with "ahh" moments as Jackie ends the day with a little romance.

Hart conveys the strength of military families that follows them into civilian life.  Her characters are not perfect yet they are not the "wounded" stereotype in many romances.   They are not rich in wealth but rich in love.   They carry on, valuing their family and upholding their integrity.   I applaud Hart for creating realistic characters that pay loving tribute to those in service.

Recommended read for fans of cozy mysteries, Florida sunsets, and happily ever afters for veterans ... until the next mystery.

I received a print copy from the author for a honest review.

I am giving away a "Magic City" swag package to one randomly selected commenter.  To enter the giveaway,

1.  Leave a comment about Miami - what do you know about it?

Learn more about Jennifer and her books at jenniferlhart.com.